17 Quiz Round Ideas To Upgrade Your Virtual Quiz Game

While many things have left our lives during lockdown and quarantine - going to work, having drinks down the pub and keeping our hair at a reasonable length thanks to hairdressers - there is one activity that is definitely on the increase: Quizzing.

As an easy way to keep ourselves entertained and have some much needed face time with friends, family and colleagues, quizzes conducted over video have been a great way to do this over the past year or so.

But with so many quizzes - and forced to socialise this way rather than in real life for much longer than expected - we run the risk of becoming fatigued by the standard general knowledge set up.

So, take inspiration from our list below and inject some spice to your quiz (plus, win kudos as being quizmaster extraordinaire among your peers).

An oldie but a goodie, a music round is a good way to lift up the vibe in a pub quiz and when playing through Zoom, you can choose to share audio with friends so that they hear a song perfectly through their own computer.

You can do a musical intro round, where you play the first 10 seconds of a song and players have to guess the artists and song title, or a 'what comes next' round where you play (or sing?) a lyric and it's up to teams to answer the next line.

As music rounds are a common part of a quiz, why don't you theme your song choices but not necessarily tell the players? If it's someone's birthday, choose songs from the year they were born, the year of major life milestones, or artists beginning with the first letter of their name.

This round can be done just with celebrities or friends and players, too.

Show a baby picture to the group and they have to guess who it is, (we have a great selection of celebrity baby photos here) or ask the relatives of some of your friends who are playing to supply you with one and everyone else has to match the correct player to the picture.

If you're a savvy Photoshop user, copy and paste pictures of your friends, family and players of the quiz onto characters from films and TV shows and get the players to guess the series or movie.

This can be done with food dishes, cocktails or baked goods. Name the key ingredients of one of the aforementioned kitchen-related topics and players have to guess what you're making.

For example, lime juice, tequila and Triple Sec would be a Margarita. Tomatoes, mincemeat and spaghetti would be a spaghetti bolognese.

Play snippets of viral videos (like this classic BBC News moment) and pause it right before the main moment happens, asking players what happens next in the viral video.

Many video conference apps like Zoom and Google Hangout let you share your screen so you can play the clip to players.

Using Google Earth, zoom in on a landmark so that only the view from the landmark is visible. Then ask players to guess the landmark.

For example, this picture is of the Rio de Janeiro coastline, taken from Christ The Redeemer.

With players taking part individually in their homes, it makes sense to liven things up a little bit with a snap round.

So, get players ready and instruct them to bring you back a household and everyday item, for instance a whisk. The first person you see show you the whisk on your screen wins the point.

A fun and easy way to challenge your guests is with a synonym round so, replacing the titles of songs, books, movies and TV shows with synonyms in their place (a synonym is another word which means the same, in the same language). 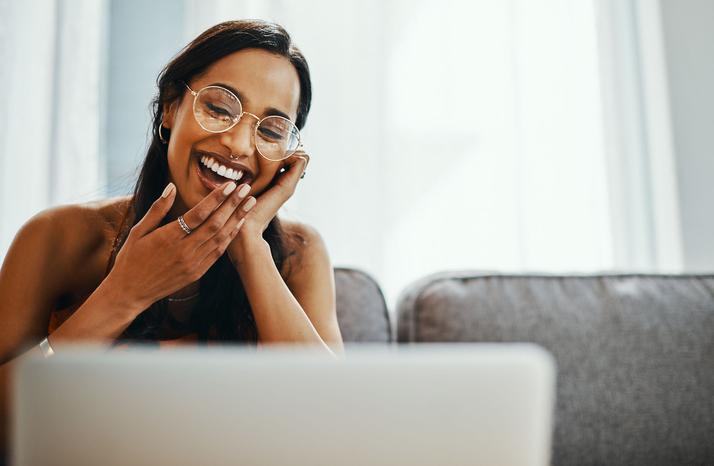 For example, Dirty Dancing could be Filthy Bopping. Get it?

9Guess The Date Of The Pic Of Your Mate

A personal touch which is a great one to play with close friends. Finding pictures of your friends - we suggest trawling their back catalogue on social media - ask the rest of the team the date and month in which the photo was taken.

Tip: This round is extra great if the photos are funny 0r memorable because of when and where they were taken. Remember to be nice, guys.

We see company logos all the time but just how many do we actually remember?

For this round, share screens and then spell out a word - it could be the hometown you all grew up in, the university you went to or a particular family member if it's their birthday - using letters from different company logos. Participants then have to guess which company or brand each letter in the word represents.

Similarly to the music round, play an audio clip to teammates of a famous person speaking. The easiest way to do this is to search on YouTube for a celebrity interview and play a snippet where it's just them talking (remember not to share your screen for this one).

In a similar vein to the synonym round, spell out popular films, TV shows, songs or books using just emojis.

13Guess The Designer... Or Celebrity

If fashion is your group's forte, collate a load of red carpet moments (the Met Gala is a great mood board for this) and get teammates to guess the designer behind the famous looks.

If some members of the team might not be as clued up when it comes to the names behind the creations (we're looking at you, Dad) then crop the celebrity's face and ask them to recall the A-Lister wearing the beautiful dress, too.

14Fill In The Missing Words Of The Tweet Or Status

Another great one to do with close groups of friends... so not to embarrass players too much.

Dig up some old tweets and Facebook statuses from players, blank out two or three words and ask your players to fill in the missing words. Think Have I Got News For You's headline round.

One of the most frustrating rounds is the TV intros round. So play a few seconds of the introduction song from a TV show and ask players to name said programme. For example an easy one would beThe Fresh Prince Of Bel Air or Friends, however there are many that people know but cannot think on the spot of the correct show, hence the frustration. Some great ones: Question Time, Doctor Who, Breaking Bad, Crystal Maze... the list goes on.

This one might take a bit of planning but it's a good one. Make sure all teams have the same, easy-to-hand craft tools at their disposal, for example: a newspaper, cardboard box, hairband, scissors and nail polish and give them an allocated amount of time to make a product. You can give them a category like accessories or leave it up to them to channel their inner craftsperson/stylist.

Another celebrity-focussed round is a Have I Got New For You-esque 'How are these celebrities connected?' round. So for example, with the three individuals in this photo - Meghan Markle, Rihanna and Reese Witherspoon - the connection is that all three women are best known by their middle names, not their first names...