The facts regarding Fox News' lack of professionalism seem rather obvious. And that ought to be plain for Beltway journalists as well. But whether for reasons having to do with external professional, social, or political pressure, many journalists have opted to pretend that Fox News is a serious outlet, that it's just like its cable and network TV news competitors.

“Journalists should be honest, fair and courageous in gathering, reporting and interpreting information.” -- Society of Professional Journalists

Why the Beltway press has invested so much time and energy in recent weeks defending Fox News, with one scribe even claiming that the White House's public critique of the network was “dangerous to press freedom,” and why the press refuses to acknowledge what's so obvious about the cable channel's political pursuits, remains baffling.

The facts regarding Fox News' lack of professionalism seem rather obvious (as I detail below 30 different times). And that ought to be plain for Beltway journalists as well. But whether for reasons having to do with external professional, social, or political pressures, many journalists have opted to pretend that Fox News is a serious outlet, that it's just like its cable and network TV news competitors.

They insist that any suggestion that Rupert Murdoch's cable channel isn't legitimate is completely off-base and that the White House is not even allowed to have an opinion on the issue. Indeed, ABC News' Jake Tapper suggested it was not “appropriate” for the administration to tag the channel as illegitimate. (Tapper himself can't tell the difference between the programming that Fox News and ABC News produce.)

The rush to defend Fox News is an odd one, because I don't remember the same type of the circle-the-wagons defense when the previous Republican administration openly waged war on The New York Times and NBC, two news outlets whose standards far outshine the kind of pseudo-reporting Fox News produces on a daily basis. That Beltway media elites have decided to rally around Fox News of all entities remains as puzzling as it is short-sighted.

The truth is, journalism is not difficult to practice, nor is it tough to identify. Journalists aren't licensed, and anyone can try their hand at it, as the Internet has made clear. So there is no higher authority declaring what is and isn't journalism. But the craft, like obscenity, is instantly recognizable in its true form.

For generations in this country, there has been a sort of a gentleman's agreement in terms of what constituted professional behavior among journalists. And there has been a sense of shame when members crossed those lines into unprofessional behavior. Bosses chastened those employees, people were fired, and ethics panels were summarily convened to make certain the transgressions didn't happen again. Fox News, though, has walked away from all of that. And guess what? The rest of the press hasn't said boo.

That's been the sad case for years. (Playing dumb about Fox News' partisan pursuits now qualifies as a Beltway intramural sport.) Indeed, the loophole, or the caveat, to journalism's gentleman's agreement has always been that the guidelines were voluntary and self-policing. There was no governing body, either within journalism or without, that regulated the product. The only collective deterrent from producing bad journalism, aside from rather lax U.S. libel laws, is a collective sense of shame, a shared feeling that making a factual error -- or worse, purposefully pushing false information under the guise of journalism -- was both unprofessional and unacceptable.

But clearly, Fox News does not share that sense of shame, because it's not part of the larger journalism brotherhood. Fox News doesn't feel like rules such as fairness, accuracy, neutrality, and independence apply, which is obvious since Fox News breaks those rules with stunning regularity. In fact, its programming day seems designed to break the traditional rules ad nauseam. That's what it's built to do. And if nothing else, Fox News is ruthlessly efficient.

So, Fox News has altered the game by unchaining itself from the moral groundings of U.S. journalism. And guess what? There is no industry shame being rained down on the outlet. The rest of the press not only doesn't complain, it defends Fox News and even apologizes on its behalf, which is what we've seen unfold for the last two weeks.

If we're actually going to have this is-the-world-really-round “debate” about Fox News, then let's put it in perspective in terms of what constitutes a legitimate news organization.

Here's how the Society of Professional Journalists describes the craft:

Members of the Society of Professional Journalists believe that public enlightenment is the forerunner of justice and the foundation of democracy. The duty of the journalist is to further those ends by seeking truth and providing a fair and comprehensive account of events and issues. Conscientious journalists from all media and specialties strive to serve the public with thoroughness and honesty. Professional integrity is the cornerstone of a journalist's credibility.

The organization's Code of Ethics declares “the Society's principles and standards of practice.” In terms of a broad-based definition of what journalism ought to be, the Code of Ethics remains the industry standard. And as you'll see below, Fox News routinely, and blatantly, breaks the code to which ethical journalists are supposed to aspire. Fox News staffers (and not just the opinion show hosts) don't simply fail to live up to the industry's own ethical standards. They produce broadcasts that run directly counter to established values and rules. In other words, they obliterate the Code of Ethics on a regular basis, which to me signals that Fox News is not a legitimate source of journalism.

Below are some cornerstones to journalism's Code of Ethics, followed by clear-cut examples of how Fox News tramples that code:

--Test the accuracy of information from all sources and exercise care to avoid inadvertent error. Deliberate distortion is never permissible.

Timeline of a [madrassa] smear

--Make certain that headlines, news teases and promotional material, photos, video, audio, graphics, sound bites and quotations do not misrepresent. They should not oversimplify or highlight incidents out of context.

After teasing story by saying “Obama makes a little girl cry,” Fox News' Kelly acknowledged it was not true 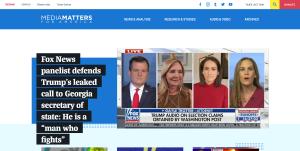 --Distinguish between advocacy and news reporting. Analysis and commentary should be labeled and not misrepresent fact or context.

--Be sensitive when seeking or using interviews or photographs of those affected by tragedy or grief.

--Recognize that private people have a greater right to control information about themselves than do public officials and others who seek power, influence or attention. Only an overriding public need can justify intrusion into anyone's privacy.

--Remain free of associations and activities that may compromise integrity or damage credibility.

FLASHBACK: When Fox News boasted about its “unprecedented” access to the Bush White House

--Be vigilant and courageous about holding those with power accountable.

--Admit mistakes and correct them promptly.

For instance, a legitimate news organization does not:

Source its research to “conservative blogs.”Purposefully present stories out of context.Regularly declare "Victory!" when a White House initiative fails.Ignore a breaking news story that embarrasses the Republican Party.Invite fringe conspiracy theorists to appear on news shows.Suggest during a news program that Democrats voted to “protect pedophiles, but not veterans.”Routinely accuse the president of the United States of being like Adolf Hitler.Describe itself as the “voice of the opposition.”Air more than 100 commercials promoting partisan political rallies.Show 22 clips of health care reform opponents who attended town hall forums, and none of health reform supporters.Purchase full-page newspaper ads to spread falsehoods about the news competition.Invade the privacy of second-grade students.Promote violent political rhetoric.Fail to fact-check a murder story before airing allegations about it.Allow a news anchor to suggest a Supreme Court nominee is guilty of “reverse racism.”

It certainly would be helpful if reporters and pundits who work for respected corporate news outlets and who today defend Fox News as a legitimate operation (or at least chastise the White House for raising doubts) examined the 30 examples I listed above and ask themselves this: If they committed just one of those newsroom transgressions, would they still have a job? Would bosses at ABC or The New York Times or The Washington Post or wherever be willing to have those journalists on staff if they bent, and then busted, journalism's Code of Ethics the way Fox News regularly does?

I suspect the obvious answer is no. And I suspect journalists understand that. So why the Beltway charade? Why refuse to acknowledge the self-evident truth that Fox is not a legitimate news organization?