4 years since Batman: Arkham Knight: What the hell is

Batman: Arkham Knight came out in 2015. The year of Left Shark and Hotline Bling. Batman's been in three DC movies since then. I adopted two cats and developed chronic back pain. That was all a lifetime ago, four whole years. In that time, Rocksteady Studios has been plugging away at its next big project in quiet, keeping the bulk of leaks and rumors and speculation at bay. After putting out some of the best superhero games of all time in the Batman Arkham series, we, like you, also want to know what the hell Rocksteady has planned next.

There's little to work with, but here's everything we know about Rocksteady's next big game.

We know Rocksteady is working on a new game. That's how videogame studios make money. It's also been confirmed multiple times over the years. Rocksteady job listings constantly reference a "highly anticipated upcoming AAA title". I can also feel it in my bones, for what it's worth. It's making a new game. The prophecy foretold it.

We know it's not a Superman game. Thank goodness. Rumored shortly after the release of Arkham Knight in 2015, Rocksteady game director and co-founder Sefton Hill only just squashed the Superman speculation.

Besides that, we know next to nothing. Miraculously, nothing else has leaked. It's surprising, especially in an era where it feels like every major studio's new games are announced on message boards before the internal marketing team even knows what they're selling.

What we think we know

We think it's nearing completion and could be announced as soon as E3 2019. A job listing at Rocksteady for a community manager went up last September, which means Rocksteady is prepping a friendly face and punching bag for fans of The Next Thing. Part of the community manager position also states that they'll need to "present live demonstrations of gameplay". 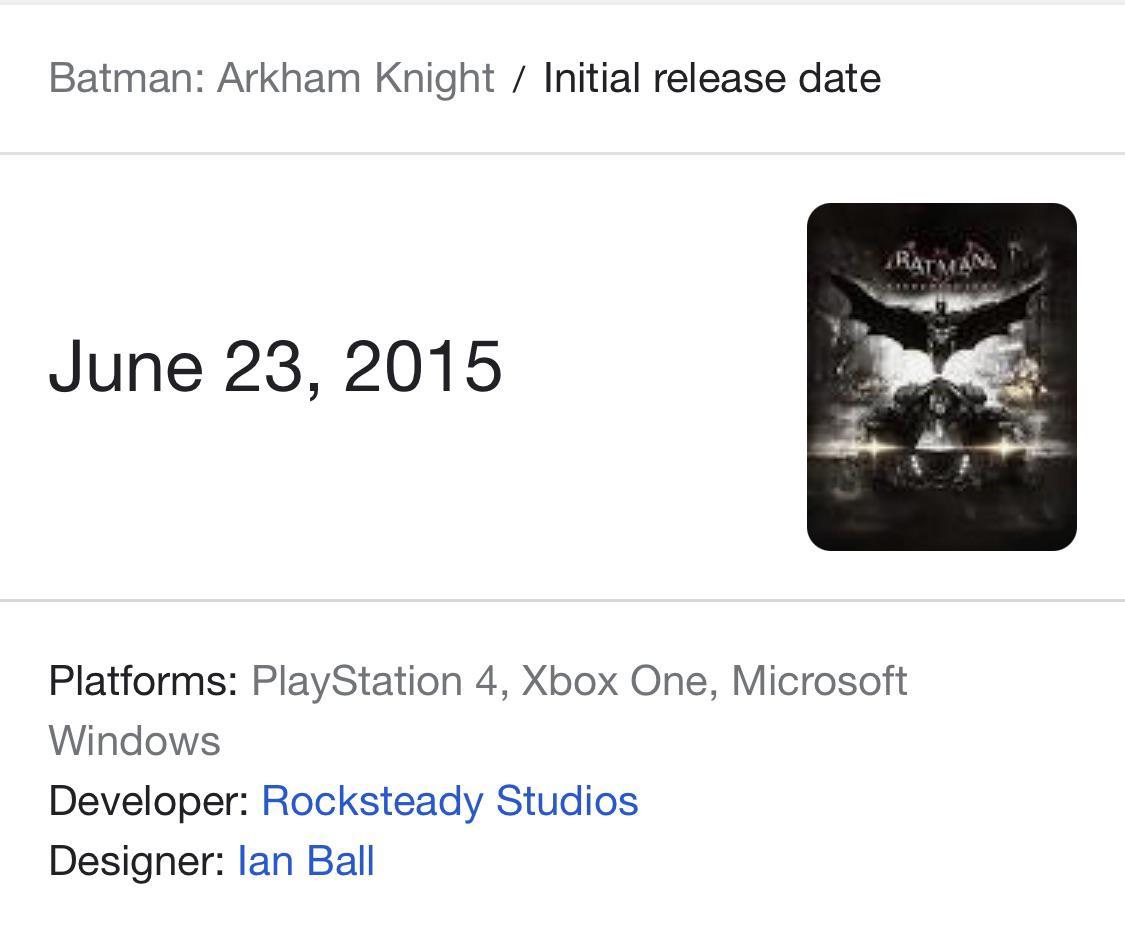 There's no practicing that unless the game is far along enough to demonstrate to a public audience. E3 features a large public audience and it's a great place to introduce a community manager to potential future community members.

More recent listings for technical animators and an optimization coder point to a game nearing a feature complete state that needs cleaning up.

We think it's going to be a live service game. If I read into Sefton Hill's Reddit AMA, his desire to get the community "involved heavily" with Rocksteady's next could imply that it's working on a live service game of sorts, something like a Destiny 2 or Fortnite or Monster Hunter: World. Getting behind the importance of 'community' is ubiquitous marketing language for most games these days, but especially so with living games like Destiny 2 or Fortnite. This could be the first beat of the drum.

I'm hoping Rocksteady stays with singleplayer, though I'm always down for some cooperative play in the mix. I just have to imagine making those dense, detailed open world Gothams is too time-consuming and expensive to pin on a singleplayer game that depreciates in value (for devs and publishers) faster than something with a longer tail and a dedicated community of people complaining about the patch notes every week.

What we want to know

Court of Owls basically asks, what if Batman but The Illuminati?

Is it another Arkham game? We don't know, but it's likely. WB Montréal is rumored to be working on another Batman game, at least. Our friends at GamesRadar reported on some leaked messages from an alleged WB Games QA tester that claims the next game is called Batman: Arkham Crisis and that it's based on the Court of Owls comic arc. Again, rumors of the wildest order.

It would make sense, though. WB Montréal hasn't put out any major games since Batman: Arkham Origins in 2013, unless you count 2014's Lego Legends of Chima Online, and it was generally well-received. Why not make another? Batman sells.

The Batman license is too valuable for Rocksteady to leave alone, too, so I'm guessing we'll return, but not as The Dark Knight himself. Some friends might come along, too. With WB Montreal heading up a mainline Batman game, Rocksteady could be laying down foundation for a game that involves the entire Batman universe, if not the entire DC universe.

If it is, can the Riddler please eat my shorts? Whatever form Rocksteady's next game takes, if the Riddler's in, I'm out. Obnoxious prick. I never want to see another Riddler Trophy again.