You - or your wayward demonic teens - might have summoned up a malignant Mexican spirit with a couple of pencils. But, thankfully, all is probably well — here's what's really going on in the Charlie Charlie Challenge.

The Charlie Charlie Challenge — or variants of it, known as the pencil game or Charlie pencil — has been around for some time. It’s claimed that the game is an old Mexican tradition, but there’s no trace of that on the internet, but it seems to have been around for years before it took off this week.

To play the game, grab a sheet of paper and draw two lines on it to make a cross. Put a “yes” in the top right and bottom left hand corner, and a “no” in the remaining two.

To properly summon the demon, according to the game, you then have to ask “Charlie, Charlie, can we play?”

The pencils should then start moving. If they go to yes, the demon is ready and willing to answer your questions — put the pencil back, and use the same technique to get answers. If it’s a no, then you’ll have to come back later, or try again.

Gravity, and the awkward positioning of some pencils. They just wouldn't sit still even if you wanted them to. 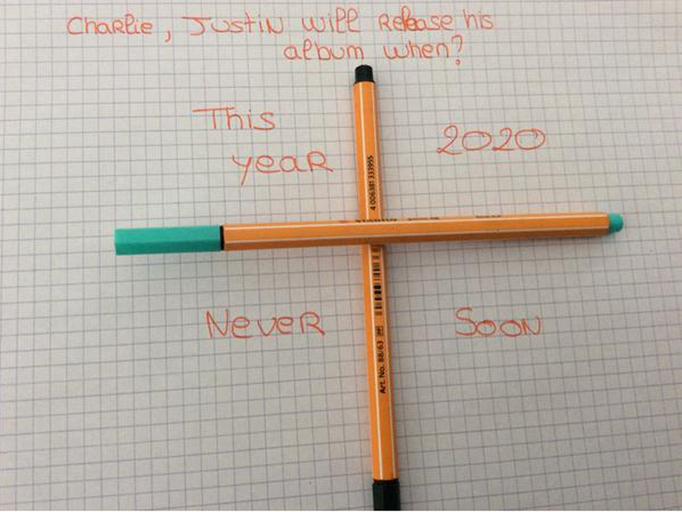 It’s perhaps scarier than a Ouija board because it doesn’t have the same explanations. With those boards, players have to keep hold of a glass while it moves around the table — so it’s not difficult to imagine that people might be pushing it around without knowing it.

With the Charlie Charlie game, however, nobody is actually touching the pencils. But they are still likely being pushed — the pencils have to be so finely balanced on top of each other that even the slightest movement from a breath or slightly tilted surface will push it around.

The arrangement of pencils that the game requires means that they’ll always move, because it’s just not a natural position for them to be in.

That’s why the game works reliably, to make the demon at least say no — unlike the Ouija board, it doesn’t require people to work, and so the pencils will always move if they’re aligned correctly. But if the friction of the pencils is too much, they just won't move.

If you’d like to debunk the game for yourself, try doing the same thing without the paper and without the incantation. Pencils placed on top of and across each other always move around, whether or not a demon is summoned to push them.

Why does scary stuff happen afterwards?

Afterwards, some have reported strange goings on. Those seem especially scary if people don’t chant the important words “Charlie, Charlie, can we stop?” and say goodbye when the demon says yes.

It’s possible that strange things are happening. But it’s equally likely that after playing the game the brain gets itself into a state that makes it extra suggestible and fearful.

That’s the same thing that makes people more likely to hear strange noises when they’re on their own or in the dark. In both of those situations, people are genuinely more in danger — so the brain think itself into a special fight or flight state that makes it extra-vigilant to noises, so that those dangers can be avoided.

As with most urban legends, the actual fact of who Charlie is seems to vary depending on who’s telling it. Some claim it is a child that took his own life, others a demonic Mexican man with black and red eyes.

The only way to really find out who he is for sure is to play the game and ask him.