'Choose Your Own Fake News' game launched by Pollicy and ...

Over the past few years, the continent has experienced a string of events propelled by the spread of "fake news."

organization, through a partnership with the

, wants to tackle the spread of misinformation in East Africa.

Pollicy is a Ugandan civic technology organization with a focus on the use of data for advocacy, research, and training. It has created a web-based game called

"Choose Your Own Fake News,"

where characters explore different scenarios that portray how misinformation can have real-life consequences.

Pollicy founder Neema Iyer told CNN that the game was created to allow people to think through how some of their choices can contribute to the spread of inaccurate information.

"Fake news has always existed but now with the power of technology, it is amplified and reproduced at a very quick rate. A lot of Pollicy's work focuses on digital rights, data protection, and all these issues come together to amplify the fact that we need to tackle disinformation," she said.

Choose Your Own Fake News

" has three characters -- Flora, a student who lives in Uganda, Jo, a shopkeeper in Kenya, and Aida, a retired grandmother in her 60s.

Players step into the life of whichever character they choose and scrutinize videos and news headlines that have to do with job opportunities, vaccines, and election violence.

Flora is expected to make a series of decisions around a job interview based on a sketchy Instagram post -- whether to do more research on the company before scheduling an interview or go ahead without digging deeper.

"The whole point of the game is to scrutinize the information and news that you have. It's just like role-playing out what you would do in a situation where you have information," said Iyer.

There are no winners or losers but players are expected to make decisions that correctly debunk misinformation or they will be faced with consequences such as falling victim to fraud or accidentally inciting a mob.

According to Iyer, her team spent months brainstorming different scenarios before eventually settling on the ones in the game.

It took six months to put the game together, with funding from the Mozilla Foundation, the nonprofit creator of the Firefox web browser.

"Mozilla had an open call for the Creative Media Awards last year and I put in an application for "Choose Your Own Fake News" which was accepted," Iyer said.

or CMAs, Mozilla selects and invests in people and organizations, like Pollicy, which create solutions centered around making the internet more inclusive and secure.

Last year's theme for the awards according to J. Bob Alotta, Mozilla Foundation's vice president of global programs, was specific to how artificial intelligence or AI plays a role in the spread of misinformation. 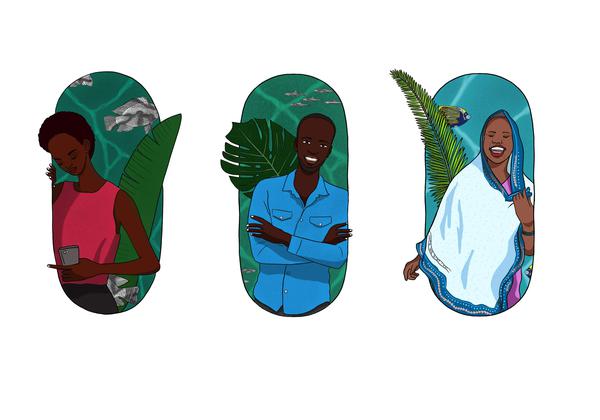 After a filtering process of about three months, "Choose Your Own Fake News" and seven other projects from across the world were selected winners of the award and funded with a total of

Alotta told CNN that as part of its support to tackling disinformation, Mozilla also helped spread the word about 'Choose Your Own Fake News" to its network, with the hope that more people play the game.

"There's the money, but it is also about building a strategy for engagement and that's to help the work reach more people. Mozilla as a global foundation has the sensibility to leverage the network's they have access to," said Alotta.

Iyer, who drew the sketches for the characters in the game, said it was important to make them black because "Choose Your Own Fake News" is specific to Africans.

"It is important to represent black and brown people in my art. I drew the sketch thinking that the people who will play this game are black and the game needs to reflect that," she explained.

According to her, her expectation for those who play the game is to think twice before taking action relating to a piece of information in the news, online, or on social media.

"I am really hoping that people who play the game make small behavioral changes, whether it is spending an extra 30 seconds looking up the source of information they receive or scrutinizing who sent it. I think that would be a massive win for 'Choose Your Own Fake News.'"