The claim: The Fairness Doctrine ended under Ronald Reagan and spawned Fox News.

Recently, a post on Facebook described former President Ronald Reagan as the "The Father of Fake News" and argued to "Reinstate the Fairness Doctrine."

"Ronald Reagan's FCC abolished the Fairness Doctrine which, since 1949, required media to present both sides' opinions in the rare event they weren't just reporting straight news," the post explained.

"A Democrat-controlled Congress passed a bill to re-instate the Fairness Doctrine in 1987. Reagan vetoed the bill," it continued. "Fox News followed in the 1990s. America is now more polarized and misinformed than ever."

Another post on Facebook — shared over 700 times — also linked the end of the Fairness Doctrine to the birth of Fox News.

The users behind the posts have not responded to requests for comment from USA TODAY.

What is the Fairness Doctrine, and why was it abolished?

For the most part, the posts on Facebook have their history correct.

The Federal Communications Commission has long been charged with issuing broadcast licenses to radio and television stations that operate in the "public interest, convenience and necessity," per its website.

In 1949, the FCC issued a report that established the duty of broadcast licensees to cover controversial issues in a fair and balanced manner. That obligation was termed the Fairness Doctrine.

Its basic requirements were that broadcasters "devote a reasonable portion of broadcast time to the discussion and consideration of controversial issues of public importance" and "affirmatively endeavor to make ... facilities available for the expression of contrasting viewpoints held by responsible elements with respect to the controversial issues," per a report by the Congressional Research Service.

"In practice, it required broadcasters to identify issues of public importance, decide to cover those issues, and then to afford the best representatives of the opposing views on the issue the opportunity to present their case to the community," the report explains.

It also required broadcasters to allow individuals who were the subject of editorials or personal attacks to be granted an opportunity to respond, and established that candidates for public office are entitled to equal airtime, according to the Encyclopedia Brittanica. 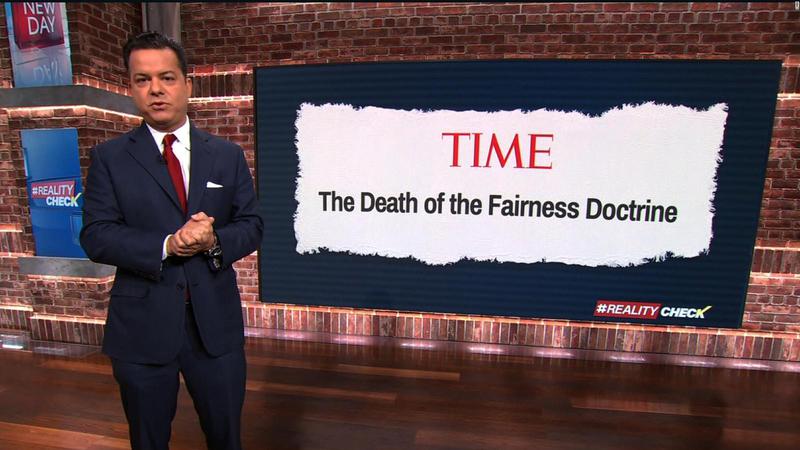 (The mandate of equal airtime for office seekers became federal law in 1959, when Congress amended the Communications Act.)

Most broadcasters complained that the Fairness Doctrine was overly burdensome and an inhibition to their coverage and free speech. They also argued that growth in the media industry rendered it obsolete.

The debate over the requirement peaked in the mid-1980s.

In June 1987, the Democrat-controlled House of Representatives and Senate passed legislation to preemptively codify the doctrine into federal law. Reagan vetoed it, per the Los Angeles Times.

It wasn't until afterward, in August 1987, that the FCC voted to abolish the doctrine on the grounds that it violated the First Amendment and stifled the sort of democratic debate it was intended to promote, according to the New York Times.

(The decision had no impact on the rule that candidates for public office be offered equal airtime, since that had become law. It also left the editorial and personal-attack provisions, which were in effect until 2000.)

Though it had not been enforced since 1987, the Fairness Doctrine was not technically scratched from the books until 2011, per to the Washington Post.

Is there a connection between the Fairness Doctrine and Fox News?

Apart from the history, the posts on Facebook claim that there is a connection between the Fairness Doctrine and Fox News. That's where they miss the mark.

The Fairness Doctrine only applied to broadcast licenses.

The report by the Congressional Research Service notes that broadcast is "distinct from cable, satellite, and the Internet, which are all services for which consumers must pay.

"It does not appear that the Fairness Doctrine may be applied constitutionally to cable or satellite service providers," it continues.

Therefore, it's unlikely that the Fairness Doctrine would have impacted Fox News, even if it were in effect in 1996, when Roger Ailes launched the channel.

"The FCC would, in all likelihood, have been restricted to regulating the content of public broadcasters, leaving Fox News to its own devices, like hundreds of other cable and satellite channels," Snopes wrote last time this claim surfaced online.

Although its impact on cable and satellite television may have been null, it's true that some credit the demise of the Fairness Doctrine with "the creation of modern-day talk-radio, including conservative talk radio shows hosted by Rush Limbaugh, Glenn Beck and Sean Hannity, according to Politico.

Thank you for supporting our journalism. You can subscribe to our print edition, ad-free app or electronic newspaper replica here.

Our fact check work is supported in part by a grant from Facebook.