Millions of people have read about a crazy conspiracy theory called "Pizzagate." An untold number of them actually believe it. One person apparently took matters into his own hands and showed up with guns to the pizza place that the conspiracy theorists say is at the center of the web.

No one was injured at Comet Ping Pong, the Washington restaurant, on Sunday afternoon, but the armed confrontation showed the offline, real-life consequences of online lies.

While conspiracy theories are nothing new, Internet echo chambers are making the deceptions more powerful and more pernicious. The world wide web provides easy access to the truth -- but makes it equally easy to wall off the facts and soak up fictions instead.

Case in point: While detectives were still scouring the scene of the crime on Sunday afternoon, "Pizzagate" believers were already saying that the incident was a "false flag" operation and a "fake news" story.

Yes, these commenters were asserting that the real-life crime was all just part of the cover-up.

If you're saying to yourself, "How could anyone possibly believe this stuff?," think back to the overheated days before the presidential election.

"Pizzagate" spun up on 4chan, Reddit, Twitter and other web sites in the final days before the election. It was a made-up story incorporating fake leaks from "police sources" and misinterpreted Wikileaks emails.

Believers imagined a pedophilia ring supposedly being run out of the pizza shop that somehow involved Hillary Clinton and her campaign chairman John Podesta, among other Democrats. 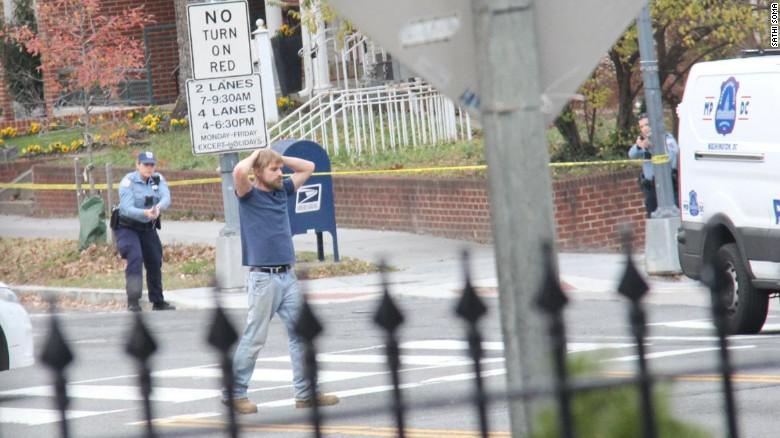 It was an anti-Clinton narrative -- just one of many -- spread by online commenters who described themselves as Donald Trump supporters. "Pizzagate" continued to evolve after election day.

The conspiracy theory apparently motivated the suspect, Edgar Maddison Welch, to drive from his home in North Carolina to Washington.

He allegedly walked inside Comet, pointed one of his weapons, and caused a panic. He apparently fired at least one shot before being apprehended.

"During a post-arrest interview," D.C. police said, "the suspect revealed that he came to the establishment to self-investigate 'Pizza Gate' (a fictitious online conspiracy theory)."

James Alefantis, the owner of Comet, said in a statement on Sunday night: "Let me state unequivocally: these stories are completely and entirely false, and there is no basis in fact to any of them. What happened today demonstrates that promoting false and reckless conspiracy theories comes with consequences. I hope that those involved in fanning these flames will take a moment to contemplate what happened here today, and stop promoting these falsehoods right away."

Not all of the obviously untrue anti-Clinton stories that have floated around the Internet were peddled by conspiracy theorists. Some of them, written by spammers with the intent of fooling unsuspecting web users and getting ad revenue from those users' clicks, have become known as "fake news" stories. Facebook and Twitter helped fake headlines go viral during the campaign.

"These things are preposterous fabrications," CNN media analyst Bill Carter said on "New Day" Monday morning, and "they're not being repudiated by the right people."

Trump's pick for national security adviser, Michael T. Flynn, shared a related anti-Clinton theory on Twitter before election day, and his son Michael G. Flynn -- who has an official government transition email address -- has repeatedly defended "Pizzagate," including in one tweet sent after Sunday's incident.