With two years of legal wrangling, parent protests, and unhappy athletes now in the past, the former A-Game Sportsplex will make its debut on November 7 under its new moniker, Franklin Sports Hall.

The new name and facilities will be unveiled that evening at the Williamson, Inc. Annual Celebration for the local business community, featuring keynote speaker Michael Cairnes, President and COO of Brentwood-based retailer Kirkland’s. The event is sponsored by Franklin Synergy Bank, headed by CEO Richard Herrington, who also serves as chair of the Williamson County Sport Authority.

Located at 215 Gothic Court in Cool Springs, Franklin Sports Hall was purchased by Tennessee Youth Sports, LLC for $12.2 million in May of this year. The new owners have since invested over $1 million in updates and renovations to the sports-themed property, from revitalized bathrooms and locker rooms, to Mylar flooring in its dance studios.

With a new business model in place, and the two ice rinks that were once the foundation of the site now gone, the rebranded Franklin Sports Hall is poised to be the county’s premier location for indoor sports teams, events and tournaments. The building sits on almost 20 acres in Cool Springs, with surrounding property being considered for outdoor fields and courts as the overhaul continues.

Tennessee Youth Sports’ strategy is unique from the previous owners, serving as landlords and contracting with organizations who will lease spaces within the 174,000-square-foot building. To date, major tenants include:

“I think the premise for this was always a great premise — there’s a great need for youth sports in Williamson County,” says Ray Dano, investor and spokesperson for Tennessee Youth Sports, LLC. “Our approach is that we’re very much wanting to run this as a building that hosts various groups that are really experts at what they do. We’re bringing complementary and synergistic businesses together under one roof.”

Approximately 1,200 to 1,500 athletes come through the doors of Franklin Sports Hall each day, with more than a half-million athletes and their families estimated to visit the facility each year.

Rogers Anderson, Williamson County mayor, is enthusiastic about the economic and community impact of the revamped site, with discussions about a county sports facility still under way.

Discussions about whether the county might purchase the former A-Game after its closing led to the founding of the Williamson County Sports Authority in 2017, following a sports feasibility study conducted by Hunden Strategic Partners. According to the study, the initial closure of the facility led to the displacement of 32 sporting events and more than 17,000 hotel room nights lost in the area. The report concluded that the tourist draw to the area, as well as the growing competitive tournament market, could add to Williamson County as a burgeoning sporting destination, and made recommendations for a $61 million indoor and outdoor sports facility.

“We are excited to see the facility opening for operations again, and excited about the athletes and their families who will be able to utilize the facility and the sports services they will be providing. We wish them much success with this new endeavor,” Anderson says. “The Williamson County Sports Authority is still meeting and considering several opportunities to further enhance the county’s sports facilities. However, there is no current ‘timeline.’ Needless to say, with this facility back in operation, the Convention and Visitors Bureau will be able to coordinate with them in booking sports tournaments back in our area, and that is good for our economy.”

Built in 1999, the facility was originally known as Southern Ice Arena. At 110,000 square feet, it hosted two ice rinks and was one of the area’s most popular sites for hockey and figure skating, producing nationally ranked skaters. The facility was expanded in 2008, with more than 70,000 additional square feet of space added for courts used for volleyball, basketball and indoor soccer, as well as family activities such as laser tag. It was purchased by Sports Land Group for $8 million, and rebranded as A-Game Sportsplex with over $1.3 million in upgrades.

In February 2016, A-Game Sportsplex closed abruptly, with its owners citing a monthly shortfall of over $72,000, and saying in a release that the facility ‘has never generated a profit.’ An emotional battle persisted in the media for months, as sports organizations with existing leases, unhappy parents, and students without a place to complete their season fought to continue to use the site. 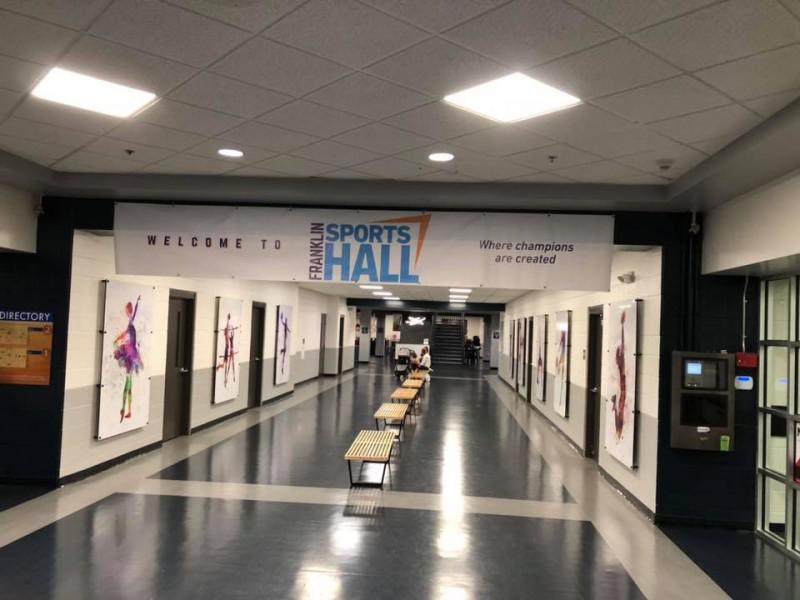 Several potential sales of the facility fell through in the following years, including a $16 million deal with Cincinnati-based developer Al. Neyer LLC, which planned to convert A-Game Sportsplex into office space.

Another deal with an investment group that wanted to preserve the building for sports use collapsed in 2017. The building went up for auction unsuccessfully in early 2018 as future office space, with a starting bid of $4.25 million.

Within months, Tennessee Youth Sports, LLC., stepped in and purchased the building. The ownership group includes seven investors and is based in Knoxville.

Nearly 60,000 square feet is still up for lease at Franklin Sports Hall including the former rink one, with nearly 27,000 square feet clear-span space unique to the area which the owners hope will draw another youth sports organization. The former rink two now houses Premier Athletics on a 10-year lease, giving a permanent home to an organization that has moved several times due to its growth.

Premiere also utilizes The Overlook, a second-level viewing area for parents. In addition, a study room with tutoring services is in development for the second level of the facility. Approximately 16,000 square feet of retail and office spaces is available the upper level.

Additional space of varying size is available on the main floor, including two prominent areas at the main entrance, targeting businesses that complement the youth sports demographic of Franklin Sports Hall.

The We Got Skills Grill, a family-owned-and-run concession stand bringing healthier options for athletes, is already in operation, and a 9 Fruits smoothie franchise will open soon. Other food vendors and kiosks can be brought in on a need basis for tournaments and events through Franklin Sports Hall.

Owned by Trigg Wilkes, Courts 615 is home to large organizations such as Tennessee Performance Volleyball Club and Tennessee Performance Basketball, as well as smaller groups, like the volleyball and basketball teams of Franklin Classical School. Wilkes was general manager at A-Game from August 2009 through August 2014, and first put forth an offer to purchase the facility prior to the Tennessee Youth Sports investment group stepping in.

“The concept of the new structure ‘feels good.’ All my new partners are awesome, hard-working guys who support youth sports and are fully invested, financially and emotionally, in making this work. That is 80% of the battle, in my opinion,” Wilkes says. “Middle Tennessee athletes are able to train and compete in one of the top sports facilities in the country. You can’t quantify having the importance of having these facilities available, but it is significant in the lives of thousands of kids and families.”

Maddux will be bringing many of his 2019 Nike Basketball Camps to the new facility, though they will still host a variety of camps on the north side of town, including CPA and Currey-Ingram Academy. Nike Basketball Camps recently celebrated its 10th year of camps and events in Tennessee, and have hosted more than 5,000 athletes, with just under 1,000 playing under its banner just this past year.

“We have the demand, and always have a wait list because of space constraints, so we are excited about working with Trigg at Courts 615 at Franklin Sports Hall for our summer camps, and year-round three-on-three leagues and skills development clinics,” Maddux says. “I’ve had a long friendship with Trigg Wilkes and anything he is a part of has a synergistic value.”

Franklin Youth Sports plans to host between 12 and 20 tournaments a year at the facility, which can draw thousands of athletes, families, and fans, according to Dano. The schedule of events is currently being worked out, with the first slated for early January 2019.

“Beyond just the day-to-day events that happen here, the tournaments absolutely bring in a big influx of people and new business for this surrounding area,” Dano says. “We know that empirically, talking to business owners, that this is a really big deal to have events happening here. We’ll see upwards of half a million people coming to this building annually. It takes a community to make this work, and we very much have that spirit in the building.”