Ryan Reynolds' "Free Guy" is now playing only in theaters and it's one of the best times I've had at the movies since 2019.

I expected to laugh, but I wasn't expecting a movie about a fictional video game to make me emotional as well.

I've been eagerly anticipating "Free Guy" since its New York Comic Con panel when Reynolds and director Shawn Levy debuted footage for the film and it had one of the largest reactions of any of the panels I attended that weekend.

At the time, I really didn't know anything about the movie other than that it starred Reynolds, "Killing Eve" star Jodie Comer, and Joe Keery from "Stranger Things." And, you know what? You really shouldn't know much more than that going into this film to enjoy it.

All you should know is that the movie follows Guy (Reynolds) who appears to lead a normal life. One day he learns he's a background character in a video game (a non-playable character) and his world begins to crumble as he learns the entire life he's known isn't real.

Not only is "Free Guy" hilarious (and a contender for one of the year's funniest movies), but it's also surpisingly a full-blown action rom-com.

Reynolds and Levy not only made a great video game movie (that isn't even based on a game), but also an unexpectedly smart satire on toxic video game work culture without it being boring or tough to understand. 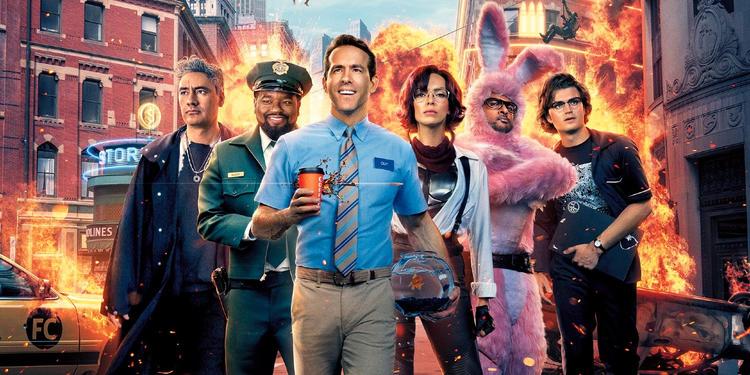 Most games are about getting ahead by using violence. "Free Guy" flips that script on its head by showing you can get ahead, not only in a game, but also in life by being a good guy, a refreshing message to see on screen.

I wasn't expecting the crowd reaction in my press screening to be so reactionary. Usually when you head to these, the critics are pretty stuffy and reserved in showing their reactions. Not here. There were numerous moments where people were clapping and laughing aloud.

Without saying too much, two of those moments came late in the film during unexpected moments. I heard that after Disney acquired the film from Fox, the film's original distributor, the studio allowed Levy and Reynolds to play in its sandboxes to add in some fun cameos that had the biggest reactions in our theater.

The most impressive part is that if you've watched the many trailers for the film, they don't spoil the film, something that feels pretty rare these days for a film with a budget over $100 million. For example, there's a very large, unexpected cameo in the film that wasn't in any early marketing.

"Free Guy" is a crowd-pleaser and just an all-around good time if you feel safe to head to a theater. You head to theaters for a communal experience and this is the type of film that was made to be watched and enjoyed with a group of friends who will have fun pointing out the film's many Easter eggs to one another.

If you liked "The Lego Movie" or "Ready Player One," "Free Guy" shares some in common with those. "Free Guy" excels because unlike the others, it doesn't feel like it's a giant ad for Legos or all of WB's movies.

Make sure you stick around and read the credits on this one. You'll catch the names of some A-list celebrity cameos that you otherwise wouldn't have caught while watching the film, including Dwyane "The Rock" Johnson and Hugh Jackman.

Read the original article on