How to Spot Real and Fake News - From MindTools.com

When Alice scrolls through her social media feed, she's stopped in her tracks by the news that her company is about to be bought out by its biggest rival. She quickly posts a response, shares the story with her contacts, and emails it to her team so that they can discuss it later.

But then Alice has a troubling thought. What if the story wasn't true? What if she just shared a "fake news" story? After all, she didn't check the source.

If she has been a victim of fake news, and then added to the rumor mill herself, how will people ever trust her again?

Fortunately, there's lots you can do to avoid making the same mistake as Alice. In this article and video, we explore how you can separate fake news from the truth.

What Is Fake News?

There are two kinds of fake news:

Stories that aren't true. These are entirely invented stories designed to make people believe something false, to buy a certain product, or to visit a certain website.

Stories that have some truth, but aren't 100 percent accurate. For example, a journalist quotes only part of what a politician says, giving a false impression of their meaning. Again, this can be deliberate, to convince readers of a certain viewpoint, or it can be the result of an innocent mistake. Either way, it quickly attracts an audience and can become entrenched as an "urban myth."

To confuse matters further, there are also people who claim that factually accurate stories are fake news, just because they don't agree with them or find them uncomfortable.

Where Does Fake News Come From?

Fake news is nothing new. But, what is new is how easy it's become to share information – both true and false – on a massive scale.

Social media platforms allow almost anyone to publish their thoughts or share stories to the world. The trouble is, most people don't check the source of the material that they view online before they share it, which can lead to fake news spreading quickly or even "going viral."

At the same time, it's become harder to identify the original source of news stories, which can make it difficult to assess their accuracy.

This has led to a flood of fake news. In fact, one study found that more than 25 percent of Americans visited a fake news website in a six-week period during the 2016 U.S. presidential election.

But, not all fake news stories are found online. Co-workers who gossip by the water cooler or while browsing print publications that fail to check their facts, for example, are also guilty of spreading misinformation, even if inadvertently.

The Impact of Fake News in the Workplace

Research shows that 59 percent of people are concerned about the effect that fake news has in the workplace, and with good reason!

For example, some people might start to believe that they no longer need evidence to back up their arguments. Others start to mistrust information all together. They stop listening to industry reports, and disengage from official workplace communication, slowing their professional growth and development. Ultimately, this can damage an organization's learning culture.

Fake news can affect behavior, too. It encourages people to invent excuses, to dismiss others' ideas, to exaggerate the truth, and to spread rumors. This can create divided, anxious workplaces where people are cynical and unsure of who to trust.

They might even begin to mistrust you if they believe that authority figures have lied to them, or that the information that they are working with is suspect. This can sap people of the curiosity, enthusiasm and ambition that they need to collaborate and to be successful.

Misinformation and fake news can also harm your business. Invented reviews of your products or inaccurate financial updates, for example, can do serious reputational damage. 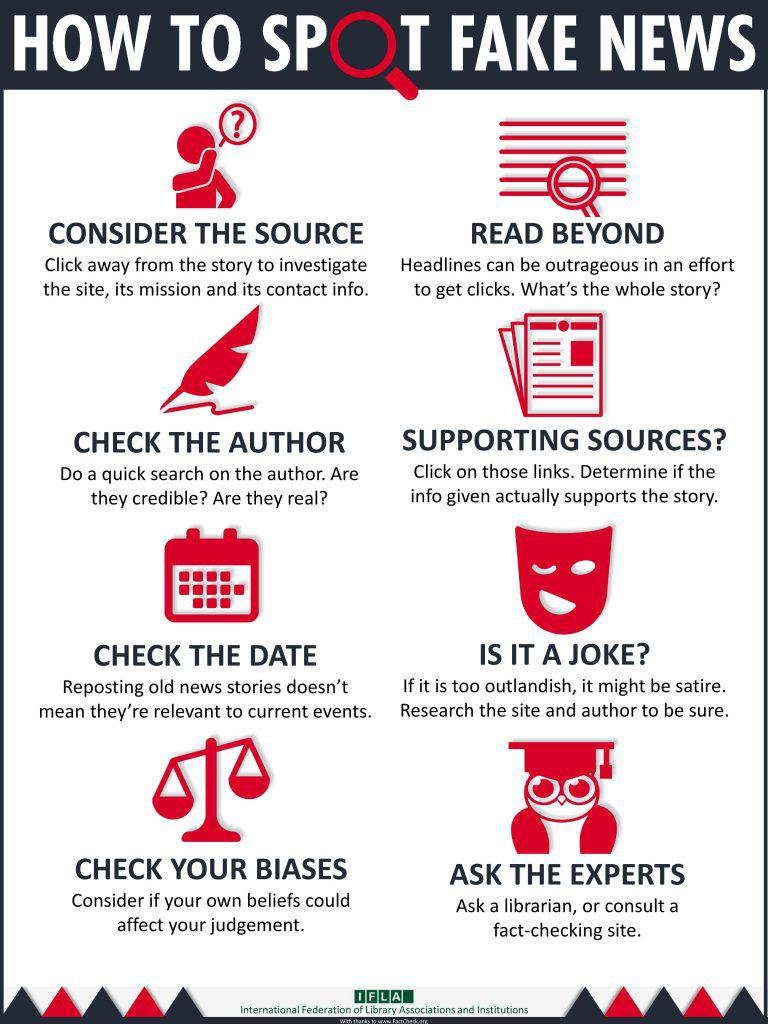 Separating fact from fiction accurately can seem daunting. But getting to the truth is always worth the effort – even if it's not what you want to hear! Use these six steps to weed out the truth from the lies:

One of the main reasons fake news is such a big issue is that it is often believable, so it's easy to get caught out. Much fake news is also written to create "shock value," that is, a strong instinctive reaction such as fear or anger.

This means it's essential that you keep your emotional response to such stories in check. Instead, approach what you see and hear rationally and critically.

Ask yourself, "Why has this story been written? Is it to persuade me of a certain viewpoint? Is it selling me a particular product? Or is it trying to get me to click through to another website? Am I being triggered?"

If you come across a story from a source that you've never heard of before, do some digging!

Check the web address for the page you're reading. Spelling errors in company names, or strange-sounding extensions like ".infonet" and ".offer," rather than ".com" or ".co.uk," may mean that the source is suspect.

Whether or not the author or publisher is familiar, stop to consider their reputation and professional experience. Are they known for their expertise on the matter? Or do they tend to exaggerate?

Be aware that people who spread fake news and "alternative facts" sometimes create web pages, newspaper mockups, or "doctored" images that look official, but aren't. So, if you see a suspicious post that looks like it's from the World Health Organization (WHO), for example, check the WHO's own site to verify that it's really there.

Remember, even if you got the story from your best friend, this gives it no extra authority – they likely didn't follow these steps themselves before forwarding!

Trusted online fact-checking sites like Snopes can help you to verify stories that sound too good to be true.

3. See Who Else Is Reporting the Story

Has anyone else picked up on the story? What do other sources say about it?

Avoid leaping to the conclusion that all main stream media (MSM) output is fake. This can be as unwise as following every rumor or conspiracy theory.

Professional global news agencies such as Reuters, CNN and the BBC have rigorous editorial guidelines and extensive networks of highly trained reporters, so are a good place to start. But no one is unbiased, and anyone can make a mistake, so keep looking.

Get the Free Newsletter

Learn career skills every week, and get a bonus workbook 8 Ways to Build Great Relationships at Work, free!

A credible news story will include plenty of facts – quotes from experts, survey data and official statistics, for example. Or detailed, consistent and corroborated eye-witness accounts from people on the scene. If these are missing, question it!

Does the evidence prove that something definitely happened? Or, have the facts been selected or "twisted" to back up a particular viewpoint?

Modern editing software has made it easy for people to create fake images that look real. In fact, research shows that only half of us can tell when images are fake. However, there are some warning signs you can look out for. Strange shadows on the image, for example, or jagged edges around a figure.

Images can also be 100 percent accurate but used in the wrong context. For example, photos of litter covering a beach could be from a different beach or from 10 years ago, not the recent alleged event.

You can use tools such as Google Reverse Image Search to check where an image originated and whether it has been altered.

6. Check That it "Sounds Right"

Finally, use your common sense! Bear in mind that fake news is designed to "feed" your biases, hopes or fears.

For example, it's unlikely that your favorite designer brand is giving away a million free dresses to people who turn up to its stores. Equally, just because your colleague believes that two married co-workers are having an affair, doesn't mean it's true.

Some stories that you'll encounter will sound "wrong," but won't necessarily be fake news. They could be intentional satire or something that comes from a humorous website, like The Onion or The Daily Mash, for example.

If these tips suggest that the information that you are about to pass on is fake, partial or malicious, avoid sharing it with others – even if you're inviting them to check it. Doing so could lead to rumors spreading and may harm your professional credibility.

Now it's time to put what you've learned into practice! Below are five recent news stories. But, can you tell which ones are true and which are false? Click on the links next to each to find out.

Fake news refers to deliberate untruths, or stories that contain some truth but which aren't completely accurate, by accident or design.

Some people also claim that truthful stories are "fake news," just because they don't agree with them. This can lead to the dangerous ignoring of vital advice.

Fake news can have a negative impact on workplace behavior. For example, by damaging learning culture, and causing rumor and mistrust to spread. So, it's vital to know how to separate the real from the fake. You can do this by following these six steps: