All my life I have enjoyed playing video games. Nothing can destress and bring me happiness in a more relaxing way than lying in bed playing a video game. I have always believed video games to be all around good. However, in my childhood, I’ve heard about so much negative stigma around them. People have said things to me such as “video games are a bad habit” or “you’re wasting your time,” and even my favorite “they’re ruining your mind.” This is not and has never been true for me. I believe video games have positive psychological effects and have shaped who I am today.

There has always been a long-standing argument on the effects of video games on the brain. Many people have argued since the invention of video games, that they have bad effects and are doing things such as “spoiling the senses” or “rotting the brain.” Not only are these arguments outdated, but there is significant evidence to support that they are not true. In fact, one could believe that there are positive psychological effects to playing video games. Not only does this form of media offer use for enjoyment and leisure, but it provides many real-life benefits to the player.

Video games have a positive effect in that they improve cognitive functions. In a study conducted by Green and Bavelier in 2012, the results showed that action video games improved a person’s abilities when tested in a field of distractors. A field of distractors is a test that is considered a good predictor of a person’s driving ability and concentration or attention (Gray, 2015). People have been complaining for decades that video games ruin attention span but studies such as this counteract this complaint. In the same study by Green and Bavelier, naive gamers, who have been assigned to play a shooting or other type of game, tested better than control participants in areas such as attention allocation and visual processing (Granic, 2014). These are skills that are used every day and they were improved in these new gamers, just by playing video games. Another study, conducted by Nature.com, found that specifically designed 3-D video games improved the cognitive abilities of older individuals (Nichols, 2017). These studies found that video games could be used to not only improve, but reverse the negative effects of aging. This is done through brain fitness and exercising the brain in ways that an older person may not be already used to (Granic, 2014). In this particular study, “participants race a car around a winding track while a variety of road signs pop up.” As these signs popped up “Drivers are instructed to keep an eye out for a specific type of sign, while ignoring all the rest and to press a button whenever that particular sign appear” (Granic, 2014). Tests such as this are not different to the racing or reaction video games that many people play. Games like this test a person’s ability to multitask and in turn make quick decisions. Benefits in cognitive function propose huge possibilities for the positive psychological effects of gaming.

Another way video games have positive psychological effects is their impact on executive functioning. Executive functions are mental skills that people use to complete tasks. An example of executive functioning that is used often is problem-solving. Problem-solving is a key component in a variety of video games. Games such as Mario or Fez make the gamer use their brain to solve problems designed by the creators. This is a test of a person’s analytical skills. To aid in this “game designers often provide very little instruction about how to solve in-game problems, providing players with a nearly blank palette from which to explore a huge range of possible solutions based on past experience and intuitions” (Granic, 2014). This has a positive psychological effect because it forces gamers to use their problem-solving skills to solve puzzles when given little to no instruction. This is beneficial because in the real world individuals must solve problems all the time. It is an obvious advantage to have a brain that is used to solving problems than one that is not. Playing action video games have been shown to improve an individual’s ability to rapidly multitask between tasks of conflicting demands (Gray, 2015). Executive functions are extremely useful in the real world and video games have been proven to improve these functions.

Video games may also provide psychological benefits that can be used in jobs. Video games allow people to communicate and play with people that live across the world via online gaming. Players can converse and work together to reach a common goal. This helps gamers “acquire important prosocial skills” that can be used in work (Ewoldsen et al., 2012). According to an article by Granic, video games can “reward effective cooperation, support, and helping behaviors” (Granic 73, 2014). This has positive psychological effects for building communication and useful team skills. Skills such as this may be directly used in work situations. The ability to do work as a part of a team is not only an important skill to have for a job, but also in life. Another way video games provide benefits that can be used in jobs is their improvement of hand-eye coordination, attention, and decision making (Gray, 2015). A study performed by the pioneering specialist R.A. McKinley proves that gamers were as good as trained pilots at learning how to fly and land aerial drones, when compared to non-gamers (Gray, 2015). This study shows that playing video games better prepares these people in learning skills that can be applied to a job. 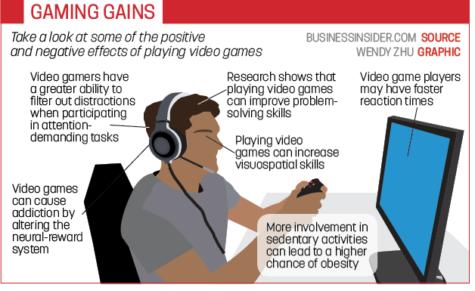 Even with all these benefits for playing video games, the argument is still being made that video games are negative. Outdated arguments are still made by many people on the internet about this media is harmful. Studies and research have shown that it has positive effects, but the uninformed critic still persists with these outdated criticisms. Even in experiments conducted to prove that video games are harmful psychologically, the studies return inconclusive. The data always has too many variables and “the authors openly admit their findings might not be entirely conclusive” (Grgurich, 2014). This helps to provide evidence that these negative effects cannot be proven and outside the case of addiction, do not exist. If more people did research on the psychological effects of video games instead of relying on cultural moral panic, they would see that the negative claims made are not based on research

Video games have been a big part of my life. I believe they have not only helped me grow into the person I am today, but have also helped me obtain skills that have helped me through life. The old argument about this great form of media corrupting the brain is outdated. There have been plenty of research and studies published that counteract these old claims. To ignore the benefits of video games in this day and age is obsolete. The psychological benefits are extremely useful. The cognitive benefits have universal applications, the improvement to executive functioning is a key component in life, and the benefits that can be applied to jobs provide skills that give gamers advantages. This leisure activity is not a waste of time; it is not only tons of fun, but psychologically beneficial.