To Play or Not to Play: The Great Debate About Video Games ...

With more than 90 percent of American kids playing video games for an average of two hours a day, whether that's a good idea is a valid question for parents to ask. Video games, violent ones especially, have caused such concern that the issue of whether the sale or rental of such games to children should be prohibited was brought before the Supreme Court.

In 2011, the Supreme Court ruled that video games, like plays, movies and books, qualify for First Amendment protection. “Video games,” the court declared, “communicate ideas – and even social messages.” But that didn’t stop the debate. Real-life tragedies continue to bring attention to the subject, like the revelation that the Sandy Hook Elementary School gunman was an avid video game player. Parents seeking an easy answer to whether video games are good or bad won’t find one, and two recent studies illustrate why.

While many studies have made a connection between violent video games and aggression in adolescents, research published in August in the Journal of Personality and Social Psychology found that teens who played mature-rated violent video games were also more likely to engage in drug and alcohol use, dangerous driving and risky sexual behavior.

Researchers evaluated more than 5,000 male and female teenagers between ages 13 and 18 over the course of four years and discovered that those who played violent video games were more rebellious and eager to take risks. The effect was greatest among those who played the most as well as those who played games with antisocial main characters.

But a study published in August in Pediatrics of nearly 5,000 girls and boys ages 10 to 15 revealed that children who played video games for less than an hour a day were better adjusted than children who either played no video games or played for three or more hours a day. These children were found to have fewer emotional problems and less hyperactivity, and they were more sociable overall. Video games, the study suggests, play a very small part in children’s lives when compared to such influences as a child’s family, school relationships and economic background.

So are video games harmful to children? “It depends on the content of the game and the outcome of interest,” says Marina Krcmar, an associate professor of communication at Wake Forest University. “Violent games have been found to be associated with aggressive outcomes, increases in hostility and aggressive cognitions.” There are several factors that may explain this. 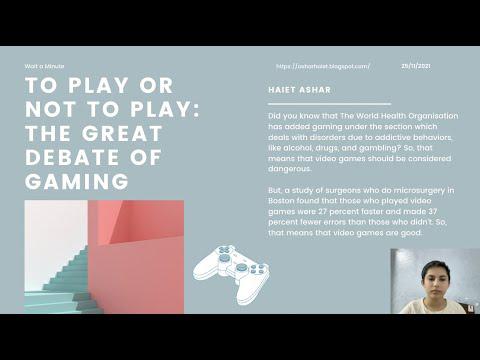 First, there are no negative consequences for bad behavior. Players are rewarded for violence with points, reaching a higher level or obtaining more weapons. And, Krcmar adds, players actively commit violence rather than passively watch it, as they may do through other mediums such as movies and television.

“Another issue is that our daily behaviors and interactions actually change our brains – that’s why we encourage kids to study and read," Krcmar says. Research presented at the annual meeting of the Radiological Society of North America in 2011 examined the neurological activity of a group of men who did not typically play violent video games but did so for the study over the course of one week, while a control group played none. MRI scans revealed that those who played the violent video games had less activity in the brain areas involved in controlling emotion and aggressive behavior. The control group showed no brain changes at all. “Keep in mind that these were players randomly assigned to play the games, not players who actively chose to do so,” Krcmar says. “We can’t argue here that people who seek out violent games are more aggressive to begin with.”

The disadvantage of video games, other experts point out, is the simple fact that time spent playing them is time not spent doing such activities as reading a book, playing outside or engaging with friends. But that’s not to say all video games are bad. There are positives to consider, too.

A report published in the January issue of American Psychologist points out that shooter games, where split-second decision-making and attention to rapid change is necessary, can improve cognitive performance, while all genres of video games enhance problem-solving skills. And despite the belief that it’s a socially isolating activity, one survey found that more than 70 percent of people who play video games do so with a friend, either cooperatively or competitively.

“Video games are a wonderful teaching tool,” says Brad Bushman, professor of communication and psychology at The Ohio State University. Computer scientists from the University of California–San Diego recently revealed that children ages 8 to 12 who played a video game they developed that teaches how to code – for either four hours over four weeks or 10 hours over seven days – were successfully able to write code by hand in Java.

So what should parents do? Monitor content and the amount of time spent on video games, Krcmar advises. And Bushman warns that you shouldn't let your children play age-inappropriate video games. “Video games rated M for 'mature audience 17 and older' should not be played by children under 17," he says. And remember: “The American Academy of Pediatrics recommends no more than two hours of entertainment screen time per day for children 2 to 17, and no screen time for children under 2," Bushman says. This applies to video games as well.