All those years on the couch playing Nintendo and PlayStation appear to be paying off for surgeons.

Researchers found that doctors who spent at least three hours a week playing video games made about 37 percent less mistakes in laparoscopic surgery and performed the task 27 percent faster than their counterparts who did not play video games.

"I use the same hand-eye coordination to play video games as I use for surgery," said Dr. James "Butch" Rosser, 49, who demonstrated the results of his study Tuesday at Beth Israel Medical Center.

Laparoscopic surgery — using a tiny camera and instruments controlled by joysticks outside the body — is performed on just about any part of the body, from an appendix to the colon and gall bladder.

The minimally intrusive surgery involves making tiny keyhole incisions, inserting a mini-video camera that sends images to an external video screen, with the surgical tools remote-controlled by the surgeon watching the screen. Surgeons can now practice their techniques through video simulations.

Rosser said the skill needed for laparoscopic surgery is "like tying your shoelaces with 3-foot-long chopsticks."

"Yes, here we go!" said Rosser, sitting in front of a Super Monkey Ball game, which shoots a ball into a confined goal. "This is a nice, wholesome game. No blood and guts. But I need the same kind of skill to go into a body and sew two pieces of intestine together."

The study on whether good video game skills translate into surgical prowess was done by researchers with Beth Israel and the National Institute on Media and the Family at Iowa State University. It was based on testing 33 fellow doctors — 12 attending physicians and 21 medical school residents who participated from May to August 2003. 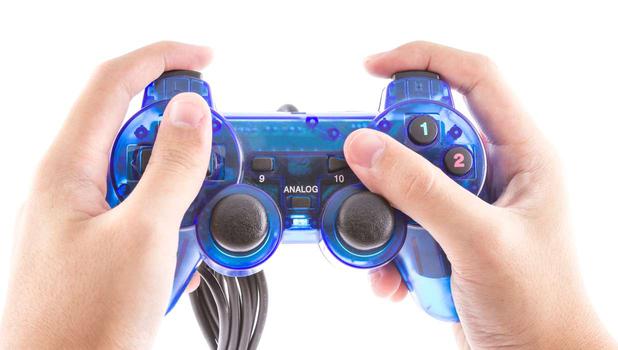 "We were surprised and actually awed by the fact that your video game skill, meaning how well you play, as well as the number of hours you have spent on video games were very highly correlating — meaning if you do this well you will be less error-prone, you will be faster and you will perform better at laparoscopic surgery," said surgeon Asaf Yalif, who participated in the study.

The study "landmarks the arrival of Generation X into medicine," said the study's co-author, Dr. Paul J. Lynch, a Beth Israel anesthesiologist who has studied the effects of video games for years.

"We grow up with computers, with PDAs, with video games systems, with the Internet, with handheld video games, with cable TV, with remote controls," Lynch said. "We've grown up saturated in this technology era that we are in and now we are bringing these skills into the medical profession."

Kurt Squire, a University of Wisconsin researcher of video game effects on learning, said that "with a video game, you can definitely develop timing and a sense of touch, as well as a very intuitive feel for manipulating devices."

Squire, who was not involved in Rosser's project, said applying such games to surgery training "could play a key role in preparing medical health professionals."

Beth Israel is now experimenting with applying the findings.

Rosser has developed a course called Top Gun, in which surgical trainees warm up their coordination, agility and accuracy with a video game before entering the operating room.

"It's like a good football player," Rosser said, "you have to warm up first."