But experts say there is little evidence to link violent games to real-world violence.

"But the only place where you see this kind of narrative still hold any water, that games and violence are related to each other, is in the United States."

That supposed connection has its roots in early research that seemed to link violent games to aggression in players. A 2015

from the American Psychological Association, for example, found a "consistent relation between violent video game use and increases in aggressive behavior, aggressive cognitions and aggressive affect."

Though the report said there was insufficient evidence to link that aggression to criminal violence or delinquency, its findings seemed to support a longstanding sense -- and fear -- that new technologies and on-screen gore could translate into violence on the streets. But that conclusion, experts argue, isn't backed by modern research.

"The general trend here is that society has a concern about new technology, parents or policymakers get involved, and maybe the researchers don't have much experience with the technology themselves, and so the first few attempts to study the thing are pretty poorly done," Przybylski said.

As time has gone on, he said, "the evidence has become pretty clear that, where there are correlations, it's probably because of a third factor." For example, boys have historically been more likely to play video games, and they also happen to be more aggressive than girls on average, Przybylski said.

This year, he published a

of more than 1,000 British adolescents that found no link between the time spent playing violent video games and aggressive behavior. That's consistent with other recent research showing little -- if any -- link between games and violence.

in July that looked at meta-analyses of pre-existing studies. The team found that violent video games may increase aggressive behavior, but "these effects are almost always quite small."

And aggression, Przybylski points out, doesn't mean somebody will commit a mass shooting. "There's no doubt when a game is really hard or very frustrating or you lose, you get pissed off." By making Tetris

in the lab, for example, his team was able to induce aggressive feelings.

"The question that you have to ask yourself is, do people go out and do mass shootings after they rage-quit 'Call of Duty'?" He doesn't think so -- and points out that most people don't usually commit violent acts after losing a game of golf.

Medical groups, and even the Supreme Court, weigh in

The American Psychological Association has yet to update its policy statement on video games and aggression, and other groups, such as the American Academy of Pediatrics, also warn against violent media.

in 2016, "should not use human or other living targets or award points for killing, because this teaches children to associate pleasure and success with their ability to cause pain and suffering to others." It found a "significant" link between violent media in general and aggressive thoughts and angry feelings.

But some research suggests that, instead of predisposing young people toward violence, video games may in fact reduce real-world aggression, allowing people to channel their feelings into gaming consoles instead of other people.

, researches analyzed crime data and found that general societal violence decreased in the weeks after the release of popular video games.

Christopher Ferguson, an associate professor and co-chairman of the Department of Psychology at Stetson University,

last year that "basically, by keeping young males busy with things they like" -- whether it's playing sports, collecting stamps or playing first-person shooter video games -- "you keep them off the streets and out of trouble."

that video games are protected speech under the First Amendment, an opinion that cited existing research into aggression.

Justice Antonin Scalia, writing for the court, said that "psychological studies purporting to show a connection between exposure to violent video games and harmful effects on children do not prove that such exposure causes minors to act aggressively."

He added that "any demonstrated effects are both small and indistinguishable from effects produced by other media." 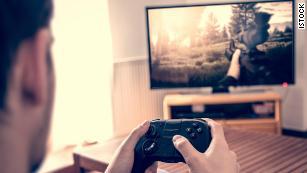 'What a shame' to blame video games, expert says

Though the court's opinion came eight years ago, current research supports it. A

published in July looked at more than 3,000 youth in Singapore and took into account prior levels of aggression and impulse control. There was no link between violent games and future aggression, researchers found.

A positive family environment, however, was a "protective factor" that reduced aggression and antisocial behaviors. "Thus, public policies that aim toward strengthening families as well as increase youth impulse control are likely to be more productive than those that target video games," the study said.

in the wake of this weekend's mass shootings, Przybylski said, "what a shame." That talk "cheapens a hobby pursued by half of American adults," he said.

But above all, by blaming video games instead of digging deeper into the root causes of violence, "we reduce the value of the political discourse on the topic, because we're looking for easy answers instead of facing hard truths."