LONDON -- After nine hours and six minutes of baseball on the artificial turf of London Stadium this weekend, the Yankees offered some advice for the next inhabitants of their makeshift clubhouse, which will await the arrival of the Cardinals and Cubs next June for another installment of the London Series.

See the sights, hydrate well, then prepare for lots and lots of offense. The fireworks were mostly kept under wraps on Sunday until the Yankees erupted for their biggest frame of the season in the seventh inning, scoring nine runs to power a 12-8 victory over the Red Sox that completed a sweep of the inaugural two-game set.

Though sun glare, white seats and speedy turf remained topics of discussion, the Yankees largely came away with positive impressions of the trip after playing the first two Major League games on European soil.

The rivals combined for 50 runs and 65 hits in the favorable hitting environment, which resulted in New York opening up a seven-game lead over the second-place Rays in the American League East. The defending World Series champions are 11 games back.

"Even these two games we won, it’s just heavy," Yankees manager Aaron Boone said. "I'm exhausted because they keep coming at you. We’ve had some success against them to this point. I just think there is a long way to go, and any time you can create a little bit of distance with a team that you know is as capable as them, it gets you a little excited."

"If we played 81 games here, it'd be a lot of fun," Aaron Judge said. "We enjoyed it out here. We came in and did what we wanted to do, get a couple of wins and put on a show for the fans." 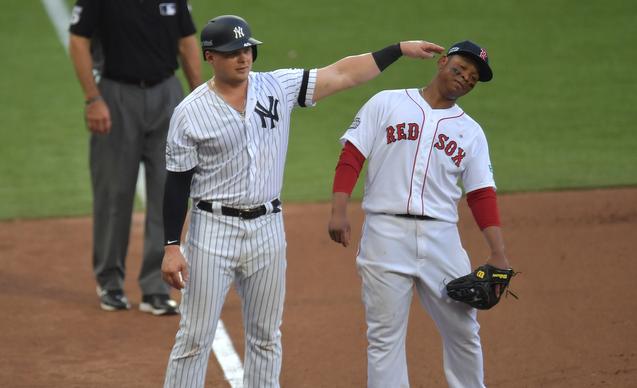 Limited to two runs over 5 1/3 innings by Eduardo Rodriguez, the Yankees broke through against Boston’s bullpen in the seventh, sending 14 men to home plate. Facing Marcus Walden, LeMahieu doubled to extend his hitting streak to 14 games, Judge walked and Aaron Hicks doubled home a run before Gary Sánchez lashed a go-ahead two-run single into left field.

"Rodriguez was really nibbling and didn't miss a spot, but then we were able to get a couple of pitches that were over the heart of the plate," Judge said. "We didn't miss those pitches and were able to do some damage, especially do some damage with guys on base. We've done pretty well all year. That was great hitting, starting with DJ. Three hits, it's nothing new."

Gio Urshela ripped a two-run single, LeMahieu drove in another two runs with his second double of the inning and Hicks lifted a sacrifice fly. An error by first baseman Michael Chavis allowed the ninth run to score, drawing a raucous reaction from the pro-offense crowd of 59,059 fans. Boston closed the gap with four runs in the eighth, charged to Chance Adams.

For all the discussion about London Stadium's homer-friendly dimensions, New York put its first 11 runs on the board without the benefit of slugging a ball into the seats.

The Yankees were kept in the yard until the eighth, when Didi Gregorius extended their Major League record streak of consecutive games with a home run to 31. Additionally, the Yankees have not been shut out in 164 games, the longest such stretch since the 2000-01 Cincinnati Reds.

"I didn't even know it happened until Didi hit his, and you saw it flash up on the board that we just broke our own record," Judge said. "We weren't even worried about that. We were just worried about scoring runs and coming away with two wins here."

The Yankees were instructed to stay awake throughout their flight back to New York, which will provide plenty of time to reflect on the week that was. Even after a clubhouse visit from Prince Harry and Meghan Markle and an MLB-sponsored soiree at the Tower of London, several of the players said they will remember the passionate crowds and the two victories most of all.

"We know they were long games. It was like a fight every inning," Gleyber Torres said. "But I think that series in London was amazing. I think we put on a really good show, and we won. That makes it so much better."