What follows is a list of our early follies, which in and of themselves wouldn’t be especially useful. However, a couple are worth remember as a means of quickly getting up to speed when returning to 1830 after playing other games in the series. For a detailed examination of the game, take a look at Crist-Jan Mannien’s excellent “1830 Strategy Guide,” hosted by Blackwater Station, or take a look at the list of links below.

During the opening auction, be sure to keep enough money on hand to float a company in the first stock round. If you don’t do this, you will likely fall a turn or more behind the other players, losing money the whole time, unless you have another viable plan in mind (e.g., collecting revenue from the B&O private company, opening another corporation with help, and/or investing smartly in other corporations).

You need six shares to float a company. This means you will need to keep at least six times the minimum par value of $67, or $402. Keeping additional funds on hand means you may be able set a higher par value, which would in turn mean that the corporation will have more money to work with during its operating rounds.

The exception to this guideline applies to the winner of one of three private companies: the Mohawk & Hudson, the Camden & Amboy, and the Baltimore & Ohio. Each of these companies provides the owner with free stock, thereby reducing the amount of money required to float the corresponding corporation. For example, the winner of the Camden & Amboy receives a free 10% share of the Pennsylvania RR. This means that he needs only five times the minimum par value of $67, or $335 total, to float the PRR.

When performing a stock dump, be sure to sell all, or all but one of the shares in the corporation you are dumping on another player. If you keep two or more shares of the corporation, the presidency will still transfer to the player with the most shares, but it also means that he will probably dump the corporation right back on you when his turn comes around in the stock round (an excellent way to bankrupt yourself).

The only exception applies when the Bank Pool holds 50% of the stock in the railroad you are dumping, after which no further stock in that corporation may be sold. However, this is still risky business because you never know how the situation may change between one turn and the next. Besides, why would you want to hang onto stock in a corporation you are trying to bury? The answer, of course, is that you would not (I don’t know what I was thinking; stop asking). 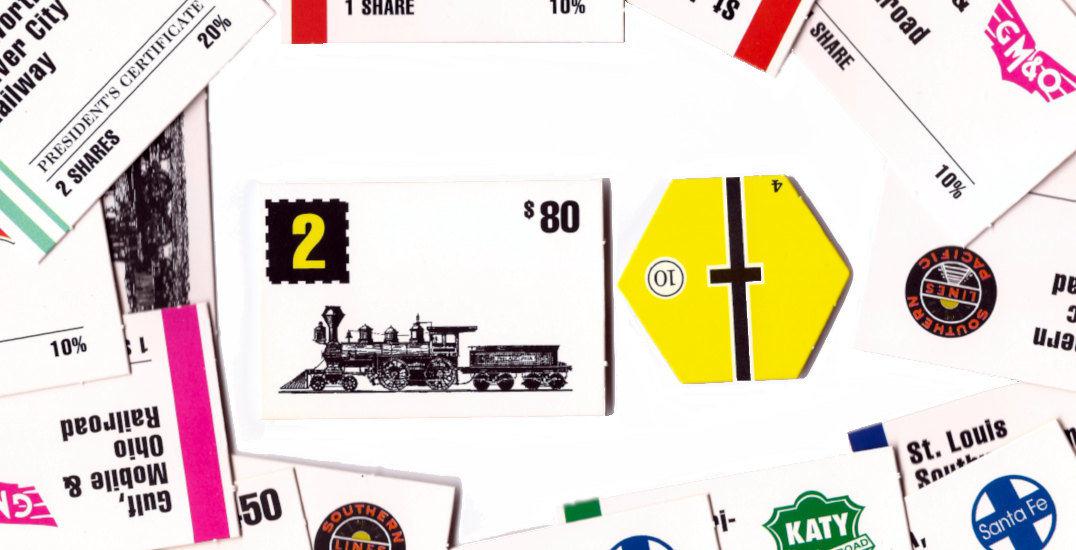 There are many articles and forum posts about 1830 and 18xx generally, some good and most questionable in one way or another. As BGG poster PJ Killian observes, “the answer to any 1830 strategy question is typically ‘it depends.’” Nonetheless, by reading a variety of tips, tricks, and strategies, it is possible to gain an understanding of the basic maneuvers.

Henning Kantner’s “1830: Advanced Strategies & Common Mistakes” is an in-depth strategy guide that may be a bit too much except for the truly dedicated player.

The BoardGameGeek 1830 Strategy Forum, including:

Another gem from J C is his explanation of a suitcase corporation: “A suitcase is a company which is floated and then not given a route, thus not obligating it to own a train. This is done so that its capital can be used for other companies.

“In the typical case, the CanPac floats, builds no track, and buys a train from another company for all of its capital. The train is then bought out of the CanPac or is left there to rust. In subsequent ORs the CanPac continues to not have a train or route, and so pays no dividends and its stock-price falls. Usually at some point the other players force it to have a route, but the time gained until that point is often critical.”

For a list of general 18xx resources, try the following: