There's quite a bit that can be done in Out of the Park Baseball 20 that cannot be done in MLB The Show 19. That's true in a vacuum, but that naked statement ignores the elephant in the room. OOTP 20 is a text-sim, which means the actual gameplay is primarily conveyed through text and not in animated action like we see in more traditional sports games.

Basically, it's like playing a traditional baseball video game through its simulation engine, only it's powered by the most advanced statistics, ratings, database of players and a bottomless treasure chest of customization options.

If you're familiar with the series, you already know that, but there are some who will become acquainted with OOTP for the first time this year. The series' latest release launched on March 22 exclusively on PC, which creates a barrier for console players, but I'm not sure this is a title fit for PlayStation 4 or Xbox One.

If the term "text-sim" doesn't scare you off and you're unfamiliar with the OOTP series, I have a list of five features available in OOTP 20 that you won't find in MLB The Show 19. Note: this assessment of what isn't available in MLB The Show 19 is based on the detailed information provided through Sony San Diego Studios' Twitch streams, not from first-hand impressions or experience.

None of these features have been available in The Show previously and none of them were announced leading up to the March 26 release.

Customization is key in OOTP. In fact, that is the primary draw when compared to MLB The Show. There are so many options, OOTP 20 gives you the tools to have almost any baseball experienced you want. One of the biggest is the ability to change league rules.

If you want to eliminate the designated hitter, change the length of playoff series, financial structures and more, it's all available. Quite honestly, the list of options can be overwhelming, which is why I pulled out the five most prominent ones for this list.

The Show does not allow you to change any of Major League Baseball's rules. As much as any of the major sports video game series, The Show stagnates the user's efforts to create their own baseball universe. 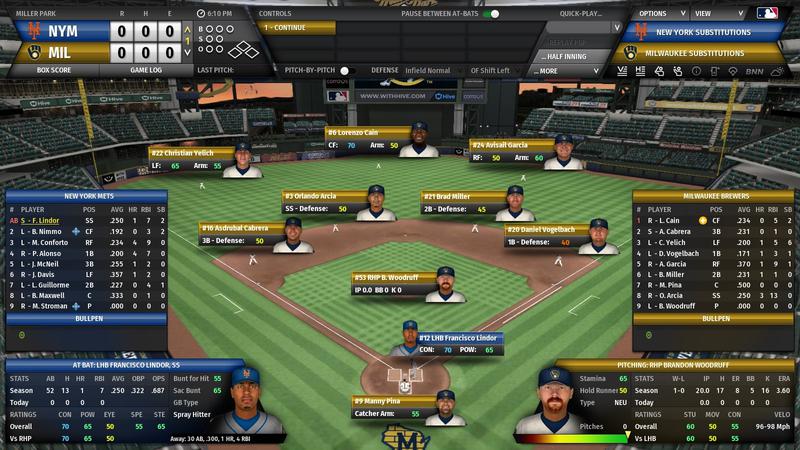 OOTP 20 lets you take the current MLB with all of its teams, and completely realign the divisions. Again, this is something a hardcore baseball fan who is into fantasy experiments might be drawn to, and it's great when a video game gives you the power to do things you can't in real life.

There are no realignment options currently in MLB The Show.

The ability to start from scratch and build a custom league is something that would be an attractive feature in The Show–or any sports video game for that matter. OOTP 20 lets you create custom leagues based on teams and players from any time in history and region in the world.

If you want to create a league that has players from a league in Japan as well as the MLB, you can do it while maintaining full control over player progression, and all of the other league rules that I mentioned before.

Sony doesn't have a license to use minor league rosters, so each year a group of dedicated users from the Operation Sports community band together to create a Full Minors set for the game. Many users in The Show community won't even start their annual franchise mode until this has been uploaded.

It's great that The Show allows for crowdsourced content that betters the gaming experience, but OOTP 20 includes full minor league support from the beginning. That support dates back through the history of baseball in the event you choose to start your OOTP 20 journey in 1989 or any other year.

Sometimes roster creators may want to simply have a player randomly generated for use in a franchise mode. You can't do that in The Show, but you can in OOTP 20. It's a niche feature, but truthfully, text-sims are for a niche group of sports gamers.

Many gamers may appreciate some of the depth OOTP 20 offers, but the inability to control players and see the action play out on the screen in a way that they're used to will always be a deal-breaker. I can see myself playing both. There are times that I'll want to actually control individual players. Truthfully, that'll be the majority of the time.

However, there are other times that I'll have a taste for the unprecedented depth and sprawling options that OOTP 20 offers. In a perfect world, one game would scratch both itches, but that seems borderline impossible.