A Game of Thrones The Board Game: Tips & Tricks

Greeting to all those who covet the Iron Throne!

In this guide we will share with you some great tips and tricks about how you can become one of the greatest rulers that the Seven Kingdoms has ever seen! Read on, if you have the courage to seize the Iron Throne and claim what is yours by rights!

A 3-step tutorial is available for any new players to A Game of Thrones: The Board Game – Digital Edition. Each of these three tutorials will focus on a core aspect of the game: Ordering your troops, resource management, Mustering, Events as well as the alliance gameplay features!

Set during the War of the Five Kings, the ten digital exclusive challenge missions will put the player in the role of some of the Great Houses after the death of King Robert Baratheon. With unique set ups and winning conditions, these missions will provide you with the perfect training in more advanced mechanics of the game to help you master the core gameplay of each house!

And now, here’s a bunch of more advanced tips per Great House.

The Lannisters start the game surrounded by foes, but consequently they are all within your reach. Strike alliances with those willing and advance slowly, but surely… Make them hear your roar as you claim territories and grow your strength.

The Lannisters face early challenges, being surrounded by many enemies, yet they do have the tools needed to succeed.

Take the Sunset Sea, whilst you reinforce the Golden Sound with ships to push the Greyjoy away from you.Use the Messenger Raven for riskier plays, as you will be able to react to your opponents strategies.Take the Searoad Marches with only a footman to avoid appearing too aggressive towards House Tyrell.

Betray the Stark when the opportunity presents itself!Use feints to deceive the Baratheon as to where you will attack.Take Highgarden if the Martell is keeping Tyrell busy.

You are the Warden of the North, the shield of your people. As such you will need to conquer and hold vital chokepoints leading to your lands.Winter is coming, and you with it!

The Starks benefit from a defensible start and are good at playing around spreading their influence.

Take Moat Caillin and brace yourself for the Greyjoy and lannister Assaults.Take the surrounding Supplies to compensate for your start.Start recruiting troops in Winterfell for the war to come.

You cannot defeat the Baratheon or Greyjoy on the seas, but you can be a risky tarket. Take control of the Narrow Sea and threaten the Seagard to dissuade any invasions.Use your influence advantage to outbid your opponents during events or on the influence track.If the Greyjoy is too big of a threat, you can always team up with the Lannisters. 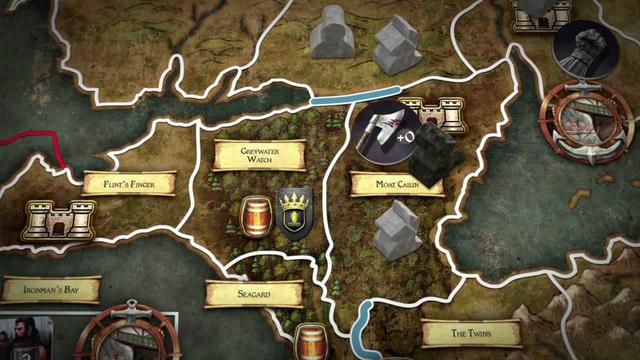 You probably will not be able to grab seven castles, but you can aim for the Eyrie.Take the Seagard and Flint’s Finger.Advance towards Riverrun to win by castle Majority.

House Greyjoy – “We do not sow”

True sea raiders, the Greyjoy are most powerful at sea. Use your uncontested navy to hide your true intentions and threaten wider areas. Choose one target and crush them. You will not be able to recruit enough troops for a war on two fronts. You do not sow, for they will pay the iron price.

As an aggressive House, the Greyjoys will be relying on an early rush and sea control.

You are the strongest in the early game with the Valyrian Sword token, don’t be afraid to pick a fight.If you choose to go against the Stark, try to come to an agreement with the Lannisters to delay their inevitable backstabbing. Start heading towards Moat Callin whilst taking the Bay of Ice.If you choose to fight the Lannisters instead, take Riverrun and Seagard to accumulate power tokens as to defned your Valyrian Sword. Make a move on Lannisport as soon as you are strong enough!

Whoever you chose to attack, you now need to burn their capital down and sieze as many castles as you can!As you will probably be the most aggressive player, prepare to face a coalition by increasing your defenses and striking a deal with the Martell.

With one of your neighbors dealt with, turn your attention toward the other. They will kindly provide you with the castles you require for victory!Do not be afraid to use your superior mobility to snatch up vulnerable castles around the map.

House Baratheon – “Ours is the fury”

As the true heir to the Iron Throne, you start close to King’s Landing. Use your navy in support as to ensure that none will challenge your might. Be wary though, as you will need to control Blackwater to field a respectable army. Once you have landed, fury will be yours!

The Baratheons have many opportunities as a very versatile House.

Use your three movement orders to take control of King’s Landing and the areas around it.Aim for Blackwater and the Reach, but keep some forces back to gain the much-needed Power tokens.Be sure to control the sea for protection and future opportunities.

Both the Stark and Martell are prime targets for a naval invasion, but be wary of the card “Doran Martell”. It may be used to throw you off from an Influence track. Counter it, or wait for the card to be discarded before attacking them!You may find your position inland contested by the Tyrell and Lannister, so avoid heading too far from the support of your ships!

Winning with the seventh castle is hard, but you may be able to get six castles, ensuring a strong chance of victory!You can either try to completely take over the Stark or Martell, or alternatively defend the Reach, Harrenhal and Storms End through extensive support from fortified positions.

The court may disregard you, but you will show them what the Tyrells are made of. You will not be able to recruit at first, but you have a great defensive position. Bide your time, grow strong and when the time is ripe, sieze the throne for yourself!

The Tyrells have a weak early game, which will blossom into a strong late game.

Grab Oldtown as well as Prince’s PassGather as much influence as possible to climb on the King’s Court and be able to recruit.Negotiate a peace with Lannister. You both have an enemy to deal with first, in your case: Martell.

By now you should have started gathering an army. Use it to contest Starfell and the Reach.Use your 0 and 4 power cards to disrupt your enemy’s plans.

It is your time to bloom, use “Ser Loras” to take a capital, be it sunspear or Lannisport.If you are strong enough, you may try to wrestle control of King’s Landing out of Baratheon’s grasp.

You lack opportunities to expand, but picking a fight with you is deadly. As the Viper, you must be dissuasive before striking. Once you are ready, take over your neighbours and show your enemies why you remain Unbowed, Unbent and Unbroken!

A beginner friendly House, with a powerful defence and limited opportunities.

Build a navy in the Sea of Dorne with a boat in Subspear and one in the East Summer Sea.Grab as many castles as possible.If you plan to attack the Tyrell, do it with a knight to avoid Mace Tyrell.

Try to cripple the Tyrell before the grow their defenses.Propose an alliance with the Stark against Baratheon. A conjoint naval attack will open many more opportunities for you!Take Storm’s End with the support of your fleet.

You can aim for the seventh castle victory by taking The Reach and HighgardenUse Arianne Martell to prevent cheeky attacks. Your opponents will need to commit lots of resources to take you on.

When you play the Game of Thrones, you win or you die…

Let’s hope that this guide proves to be a helping hand in the battles to come, giving you a strong plan of action how to handle your diplomacy, combat and influence as you fight to become the ruler of the Seven Kingdoms!