Double-Pack Cancellation Hearts is a variant of Hearts for 5-11 players.

With a large number of players Hearts can be played with two packs. This allows each player to hold more cards and gives a four-person feel to the game. However, this means that there are two of each card and can lead to confusion about which is the highest card to take the trick. The normal convention when playing with two decks is that identical cards cancel each other out. For example, if hearts is lead, and both Aces (of Hearts) are played, then they cancel each other out (yet still count as points) and the next highest card takes the trick. If all the cards on that trick are either cancelled out or do not follow the suit, the whole trick is cancelled and the cards are given to whoever takes the next trick. If the trick happens to be the last trick of the hand, then the trick is won by the second of the two highest-value cards.

This double-pack variation also adds a strategy often called “The Aardvark,” in which a player leads the queen of spades hoping that the other player holding the queen of spades will also play it, thus cancelling them out from being the highest cards, and giving 26 points to the unfortunate player who takes the trick.

Rules for different numbers of players

A 5-player game is played with two packs of 52 cards and a joker (giving a total of 105 cards; 21 for each player). The joker starts the first trick and is treated like a "zero of clubs", meaning that all the other players have to follow in that suit and that the joker cannot win the trick (unless all the other cards in the trick cancel out). 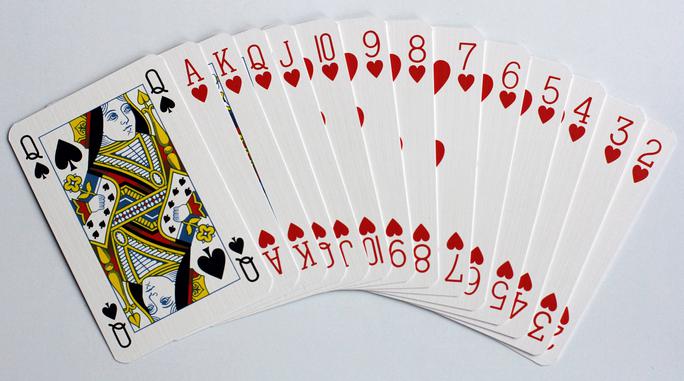 Alternatively, an 11-player game could be played with 154 cards (three packs of 52, excluding two 2♣). Each player gets 14 cards and the first trick is started with the remaining 2♣.