Destiny 2: A Complete Guide To The Pit Of Heresy - Game Rant

The Pit of Heresy dungeon is one of the many activities included in Destiny 2's Shadowkeep update. Players that have yet to explore the Shadowkeep content should try to complete it, as there are both armor and gear rewards in the questlines. At this point in Destiny 2 Beyond Light, many gamers have already explored everything Europa has to offer.

RELATED: Destiny 2: Where & How To Find Ethereal Charms

On Luna, guardians can still complete the many essence quests as well as the Nightmare Hunts. While on the moon, gamers need to speak with Eris Morn, who is the main quest NPC. She will also give guardians the Deepening Wake questline, which will unlock the Pit of Heresy dungeon.

After receiving the questline from Eris Morn, guardians will have to complete two objectives. The objectives are to open a tier III chest at the Altars of Sorrow and kill 20 nightmares while participating in the Altars of Sorrow. This initial part of the questline should be relatively easy. After participating in the Altars of Sorrow, gamers will most likely have 20 nightmare kills and tier III armor. A ton of players can participate in the activity at once, so guardians should have ample support. After completing the short challenge, the Pit of Heresy will be accessible on the map.

The Pit Of Heresy

Before entering the Pit of Heresy, players should make sure that they are a high enough power level to complete the dungeon. Fireteams can include up to three players, and it is probably better to complete the dungeon as a team. As soon as players enter the dungeon, they will fall into the depths of the pit one cliff at a time. Guardians need to make sure to use their jump ability carefully, as there are multiple sheer drops on the way down.

Guardians will notice that on the top of buildings and structures there are green symbols. The symbols indicate where the Fireteam should travel to next. Each green orb marks one of the potential objectives. First, players should head to the large red tower that sits at the precipice of the cliff overlooking the green orbs. Gamers will notice that there is a large open room opposite of the pit with three green hive symbols on the wall. These three symbols indicate which green markers the fireteam needs to look for. 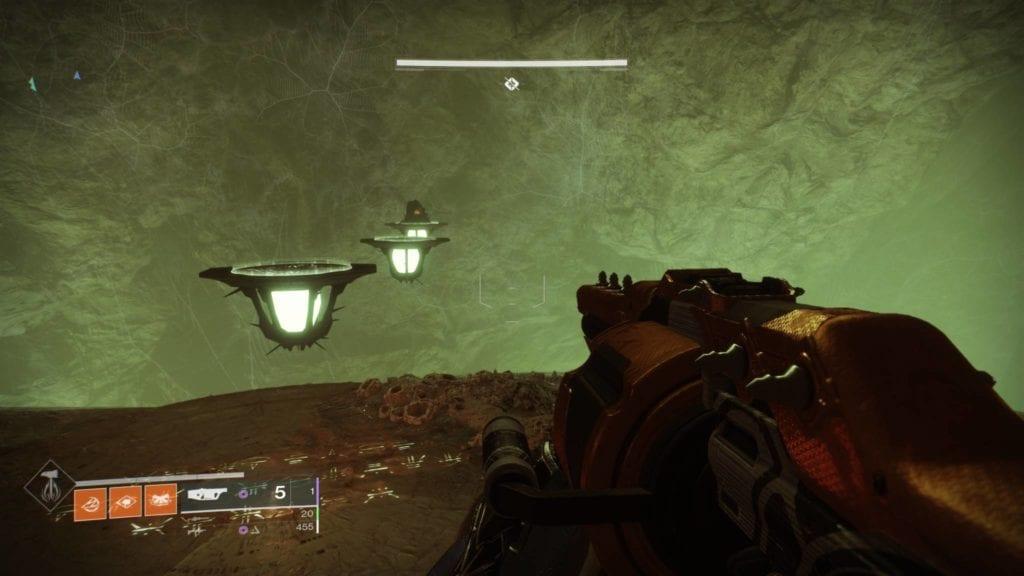 Next, gamers need to head to each of the three smaller towers that bear the symbols identified in the tallest tower. In each tower, gamers will need to defeat a Pitkeeper Knight. After defeating the knight, fireteams will be able to enter the room in each tower. There is no particular order that players need to follow, as long as all three Pitkeepers and bosses are killed. To streamline the process, each member of a squad can break off and defeat one Pitkeeper on their own. However, each room will have a boss that guardians must defeat as well. Every boss will be immune to gunfire, abilities, and supers. The only way to defeat the bosses is by using a specific sword. Gamers can find the sword by defeating the Swordbearer Knights that roam the towers. Players should look out for the circular hive elevators, which are in each tower. The elevators will allow gamers to travel back to the highest tower. Below are a list of the three bosses and how to damage them with the sword:

The Wall Of Doors

After defeating all three bosses, a pillar of green light will appear on the screen that will guide players to the next tower. Guardians must defeat the enemies in the tower and a door will open. As players proceed, they will find themselves in a room with dozens of doorways. Almost every doorway has a trap door that will catapult players off of the map. Instead of trying to go through the doors, players should look for a small slit in the wall which is just to the right of the platform in the room.

The next step in the quest is getting past the ogres. Guardians will not be able to defeat them, and there are small passageways to help gamers sneak through the dungeon. In this section of the quest, players will have to move between the three caves and complete objectives. To get back and forth without being decimated by the ogres, players need to shoot through the hive webbing in the caves, which will open up the passageways. In each of the three caves, there is a yellow bar Knight guardians need to defeat. Each knight will drop an orb that can then be slammed near one of the three blocked doorways to defuse one of the runes protecting each door. Players must use the orbs on each doorway to advance in the dungeon. Next, players will be able to pass through the doors and begin the second phase of the encounter.

Bubble shields and wells of light are particularly effective while holding the platform. Gamers should beware of the knights that spawn near the ceiling of the chamber, as they pack a punch. After slamming enough orbs, the door at the back of the chamber will open.

In the following section of the dungeon, players will have to avoid spinning fans with spikes on their way to the bottom of the pit. While this part can be frustrating, it is relatively simple. Once squads have reached the initial opening, there will be three green hive symbols on the wall. This should sound familiar by now. Players will need to avoid the traps and traverse the pit to find the three locations bearing each symbol. In each location, there will be a wizard that guardians must defeat. Gamers can explore and use their radar to find the three wizards and kill them. After killing all three wizards, the ruins will fall and a doorway will appear. Players can follow the red doorway to the next step in the instance.

The path through the doorway will eventually lead gamers to a long bridge. At the end of the bridge, fireteams will have to defeat Zulmak, Instrument of Torment. Before fighting Zulmak, guardians will have to repeat the process of defeating the three bosses with the sword from earlier in the quest. Each of the three enemies will spawn on one of the three platforms in the pit. The knight, wizard, and shrieker will have the same invulnerabilities as before. Each of the techniques needed to defeat these majors is listed above.

After the three smaller bosses have been defeated, and their orbs picked up and dunked around the main bosses' platform, there will be a green glow on the platform Zulmak is standing on. Gamers must be in that circle to deal damage to Zulmak. If fireteams do not defeat the boss quick enough he will stab his sword into the platform and use the crystal energy to wipe all guardians on the platform. Players with soft cap power levels should be able to use their weapons and abilities to eliminate Zulmak before he uses the crystal energy. After Zulmak is defeated, he will drop a chest containing legendary armor and weapons.

NEXT: Destiny 2: Where & How To Find The Bound Manacle

Bravely Default 2 uses Portals to increase a Job's level limit. Here's where players can locate them and know what to expect.