This feature significantly changes the economy of the Empires & Puzzles game. Savvy players will adapt quickly to this new feature, even though the community did not want it.

Read below for all the details. Here's the summary:

1. STOP using gems to summon heroes (at least for a few months). Stat inflation now has been elevated to a whole new level. You could say stat inflation has been put in overdrive... gone haywire ... EXLODING. You need to adapt to that first. New Powerful heroes will be introduced in late 2021 that will render your non-limit-broken heroes obsolete. These new heroes are so overpowered by current standards, that even a lot of limit-broken heroes are obsolete.

2. Focus on limit breaking in the short term.

3. Be selective about who you limit break. First limit break your most versatile heroes, such as those you use a lot for attack, defense teams and events. Then focus on your favorite attack heroes, and maybe even a few 4* superstars.

All that will take time, and a lot of food, iron, feeders and other resources. Then, by the time you make progress limit breaking, new powerful heroes and costumes will be introduced in the game. Those new heroes will make most other non-limit-broken heroes obsolete.

Read below for the urgently important new game-play strategy, so you can quickly adapt to this new disrupting feature.

Limit breakers are basically an expensive way to "pay" with rare in-game items for the ability to raise heroes up another 5 levels. For example, you can raise up Level 80 5* heroes up to what is in effect "level 85".

In order to "limit break" a hero, first you have to gather enough "Aethers". Those are a new type of token entered into the game. You will be able to get those Aethers by playing in "Mirages of Omega" quests. There are 5 different Mirages of Omega quests, one for each color of hero (red, blue, green, yellow, purple). So you will need the Aether items of the same color as the hero you want to "break". At the time of introduction in June 2021, you could also get Aether items from war loot and raid tournament loot once in a while.

Once you limit break a hero, you need to level it up in the same way you always have. All that limit breaking with Aether tokens does is open up 5 more levels. So, you need to use huge amounts of food, iron and feeder heroes to fully raise up the broken heroes.

Limit Breakers will be released in 4 waves. The first wave only provides for 5 level increases. However, there still is space for 15 more - 5 for each of the 3 remaining level stripes on heroes. So, we can expect more level breaks to be released in the future.

How To Limit Break A Hero:

The steps to Limit Break a hero are: 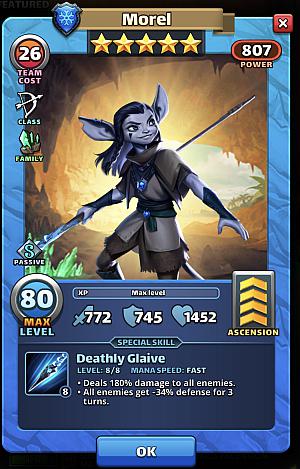 As a practical matter, you should only limit break heroes that you also want to fully emblem. Otherwise you are wasting part of the benefit of limit breaking. Because resources like Ascension Materials and Aether Items are scarce in-game you should carefully select the hero you want to bother limit breaking.

3.Limit Break The Desired Hero:
First, click on "Limit Break" for the fully levelled up hero.Spend the Aether Items and Ascension Materials, food and iron.
4.Level Up The Limit Broken Hero:

Once you have limit broken a hero, you should fully level it up. That is the same mechanic as leveling up any hero - using up your food, iron and feeder heroes.It will take huge amounts of food, iron and feeders to complete these 5 new levels, especially for 5* heroes. You should only limit break heroes who you then plan to fully level up in the newly opened levels. And, do not waste food / iron on heroes you never plan to max or limit break.

Unlike pre-limit breakers, the number of 5* heroes you have now is meaningless. Instead what counts is how many you have managed to limit break. Yes, they make that much of a difference in the game economy!

Stop pulling like crazy from hero portals! That no longer is a good strategy. I can not be any clearer than that. Stop summoning!

I'm not talking about free coin pulls. Go ahead and do those, and have fun. Maybe you will get lucky and get something good. However, at least through Fall 2021, the days of doing 10-, 30- or more summons pulls should be OVER for most players. A lot of players in mid- and upper-tier alliances go crazy pulling on every event portal. That now is just plain foolish.

The heroes you pull now will be obsolete by September-December 2021. Why obsolete? Three reasons:

New Over-powered Heroes already have been announced and put in Beta testing. Limit Breaking heroes creates overpowered heroes. Most old heroes that have not been limit broken will appear underpowered compared to the new boosted (broken) heroes. You will loseway way way more wars and raids using regular heroes against limit broken defenses with 5100+ total power. New Over-powered costumes on powerful event heroes, like Killhare and Finley already have been in Beta testing. So, if you pull a Finley or Killhare now, it may be good, but it will be underpowered compared to the costume you don't have, and to most limit broken heroes.

A lot of people are surprised at how limit breakers completely change the existing game economy in Empires & Puzzles. Here is the best strategy for coping with the new reality:

At least for a few months, the best strategy is to focus on existing heroes and stop trying to get new heroes, other than using free coins. There are a few important reasons for this:

Current Heroes Will Be Obsolete Soon:Powerful New Heroes Have Been Tested in Beta, and will be introduced in September-December 2021.Also powerful new costumes are coming. These new heroes and costumes will render a lot of the existing heroes obsolete, including even rare event heroes and most Underwild, Valhalla and Atlantis heroes. So, focus your energy and resources on emblems and limit breaking for now.Limit Broken Heroes Are Important: They are very difficult to kill: So you need limit broken heroes to have a lot of success in events, wars and raids. This was one of the reasons most beta testers opposed limit breakers.If You Want to Use Gems, Only Use For Limit Breaking: You can have a lot of success playing Empires & Puzzles never buying gems. But, if you want to use gems, the best strategy for now is to use them only to focus on limit breaking and raising up your previously maxed heroes.Limit Broken Heroes Need HUGE Amounts of Food and Iron: Food is the most "scarce" in-game resource, and Iron also can be scarce. You need a lot of food to level up troops (another important strategy), and now to level up your limit broken heroes. Do not waste your food on leveling up large numbers of other heroes. Focus on quality, not quantity!

The first place to focus your limit breakers is on your most used heroes. Typically those will be 5* heroes that you use a lot on your attack teams, and on your defense teams (war and raid). Those are the heroes you use the most and will make the greatest impact.

A lot of players use some of the better 4* heroes a lot. It is a lot cheaper in terms of food, iron and Aethers to limit break 4* heroes, so don't forget those. Some of the 4* heroes that might be worth limit breaking include:

Most of all: realize that Limit Breakers have created a short-term imbalance in the game, and take advantage of it using the strategy above!

The monthly Mirages of Omega Quests are where you will get the most Aethers - the Limit Breakers. It is kind of sneaky that you can only get 4 of the 5 Level III Aethers you need to limit break a Legendary 5* hero. You will need to get the fifth one from a chest, or to buy it. Even worse, you may need to wait 6 months for the next Mirages of Omega in that color to get the fifth Level III Aether.

This artificial scarcity has caused a lot of resentment among mid- to upper- level players who view that as a fake scarcity designed to make them pay more! Over time, we will see how badly this hurts the game, if it does.

Anyway, here's what you need to do in the quest:

One Color Per Quest

Each Mirages of Omega quest is for just one color. For example it may feature one of blue, green, red, yellow or purple limit breakers (Aethers).

Heroes that have costumes have to be limit broken twice - you have to limit break the hero and costume separately.

The costume bonus applies to the raised stats of the limit broken hero. This means that you get the benefit of both limit breaking, and any costume bonus you have.

What do you think? Any other limit breaker tips and strategies?