This article is incomplete because of the evil sabotage by Maxwell....Please help to improve the article, or discuss the issue with the community on the talkpage.

Notes about this Guide from the original Creator

Before I begin, I have to say I absolutely love Don't Starve!

I was introduced to this game by FORCE Strategy Gaming channel on YouTube - made the purchase and played so much of it I would like to think that I'm qualified enough to write a survival guide here.

I'd love to write more on the nitty gritty everyday survival strategies but I have not got the time.

All comments are welcome and cheers.

Wilson - This is probably the second best character for long-term survival. He can survive Winter easily because of the insulation factor provided by his beard and has no trouble crafting Meat Effigies. His beard also stays with him when using Teleportatos and in Adventure Mode, allowing players to traverse other worlds without fear of cold.

Willow - Willow is generally quite a useful character.Her lighter gives off infinite light, useful for exploring at night, lighting trees to warm up in Winter, or running from enemies at night. She is also immune to fire damage, which is somewhat useful in the Reign of Giants Summer.

Wolfgang - He is afraid of the dark and monsters, which is fairly bad compared to other characters. Long-term survival focuses heavily on caves and ruin spelunking, which Wolfgang is just not suited for, yet in the hands of an experienced player, he may be useful. 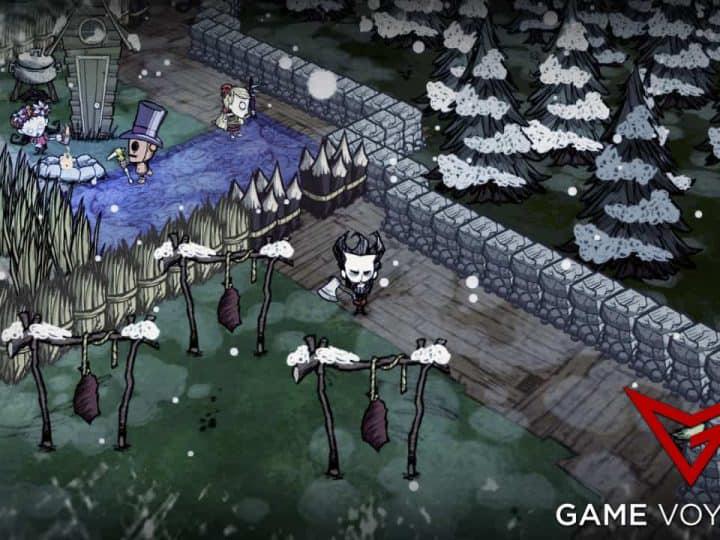 Wendy - Abigail gets in the way with a lot of stuff with her automatic targeting, which can cause a large amount of trouble for the player, especially since Abigail is frail. But the worst problem is the fact that Wendy cannot kill most mobs with a single hit using a boomerang, meaning that some tactics like killing Birds and Rabbits become useless. However, Abigail is VERY useful for killing spiders, and can take out a Tier 2 Spider Den easily.

WX-78 - He starts off with low Sanity, Hunger and Health, but once the player can get a decent foothold he is quite powerful, allowing long-term plays to be much more suited to him. WX-78 can complete Adventure Mode much faster if played well.

Wickerbottom - A useful character, yet since she is no good with spoilage she is quite inefficient in Caves and Ruins, making her undesirable. Her books are very useful with survival, creating near infinite food with birds of the world as long as you can get seeds which are not very rare. Lure plant farms are useful for this purpose. The main struggle with Wickerbottom is sanity after mass use of books. Blow darts are a must use with late game Wicker, so farm those azure feathers in winter.

Woodie - He can kill most enemies easily in his Werebeaver form and he can easily get many materials to build his world in this form. However, since the player does not have complete control over this form, the player can expect to transform at the worst possible moment as this occurs every full moon. It is possible to plan for it, but it's still a problem. Other than that, he's really quite a powerful character.

Webber - Needs to be unlocked (see Webber's Skull). Spiders are not hostile to Webber, so he can use Spider Dens to defend his base. He can also befriend spiders and use them to fight enemies (much in the same way that other characters can befriend pigs). This is very helpful underground where spiders are quite common. Players using Webber should note that Pigs and Bunnymen are hostile to him (just like spiders are to other characters). Webber's low sanity cap (100) makes spelunking require more careful sanity management than usual.

Wes - Wes has only two benefits. Balloons and taming Catcoons early. Otherwise, he is not very useful other than being a challenge.

Reasons to use WX-78

WX-78 is unaffected with spoilage. This means even eating an almost rotten Jerky still gives WX-78 full benefits, including Sanity increase. This is important when spelunking, as you can go on twice as long as most other characters. When played correctly, WX-78 can survive underground for a very long time.WX-78 upgrades with Gears. With the maximum amount of gear upgrades, WX-78 has 300 Sanity, 400 Health and 200 Hunger. WX-78 can survive underground for a very long time, and it gets almost impossible to kill WX-78 even if it is not wearing any armor. WX-78 is a very respected late game character by most veterans.WX-78 can get struck by lightning and benefit from it. You can almost disregard the rain damage. The damage is low and usually during rain, WX-78 is quite likely to get hit at least once by lightning. Getting hit like this heals him (mitigating the rain damage) and gives you an increase in speed. Plus, WX-78 gets a light aura which can prevent freezing and Charlie attacks. This ability makes WX-78 quite a powerful character in quick early game exploration and foraging. However, the sanity loss from system overload is severe, if the rain comes in early days, the player might die.While WX-78 is well equipped with benefits, some might find it not easy to play in the sense that WX-78 starts off with weak statistics. So you have to be very careful with WX-78 in the early game before getting gears.

The creators of Don't Starve have always encouraged players to have their own end goals. The game itself is open ended and does not exactly have a way to 'complete' it unless you're counting Adventure Mode. But mostly it's just how you as the player decide what your end goals are.

While surviving indefinitely is ok - the real fun (in my twisted version at least) is to try and discover and build Ancient artifacts, to kill the Ancient Guardian, and to get out of that world before Day 200 when things start to go crazy by using the Teleportato. Once the character has escaped, you get to start a new game (Day 1) with all your inventory items intact from the last game! Always continue to use WX-78, he keeps all of his health/sanity/hunger upgrades intact which makes subsequent games incredibly easier.

With this, you can go spelunking again, kill the Deerclops and the Ancient Guiardian again and basically try to amass a number of Houndius Shootius to be used in your final final base world (the one that you will stay with indefinitely and use the acumulated Houndius Shootius to safeguard against those pesky hound attacks easily!). I see a number of people in forums complaining that Ancient Guardian should respawn... well he does respawn if you Teleportato out to the next world.

In order to survive indefinitely, remember that you have to keep jumping to the next world before the day count gets too high. This is because it simply gets too tedious having to deal with 6 Depth Worms or 12 Hounds twice every week! So you must Teleportato out of there before around day 150. Try not to exceed Day 200. This means you are playing against time which is also cool as a gameplay mechanic. Think Battlestar Galactica where they have to keep warping away from Cylon attacks every hour or so. So you need to get your act together fast, go spelunking, kill the Ancient, build everything you need, find the 4 Things, locate Teleportato - and finally zap to the next world. Wash, rinse, and repeat to accumulate Houndius Shootius and then finally build an impenetrable defense in your LAST world of your choosing (please choose one with awesome layout) - and consider it the Alamo.

Yes, this undertaking is a huge feat.

I have not done it 100% yet, but I am on my 3rd world with 2 Houndii and still going strong. Mostly because it's not likely for a 400 Health WX to die, even in dire situations.

I don't have time to write more now but I will be back to write more on what you should do in your first world and more obscure tips and tricks. But below is a very quick and general guideline:

The first world is where I just try to get everything set up for the 2nd world. I may not even decide to go for the Ancient Guardian in the 1st world. Basically just get all basic necessities, lots of food, materials, pre-build everything possible in the build panel without placing them (Birdcage is key, make sure that is done). Where you build your base in 1st world is not too important since we won't be staying here long. Then Teleportato over to the 2nd world and set up a main base of operation right at the cave entrance, because the 2nd world is where spelunking gets totally serious! Try to choose cave entrances that are nearer to stuff like Beefalos or Ponds or Hives or something nice.