Different as they are, Supergiant's previous games—Pyre, Transistor, and Bastion—have all been summed up the same way. Story, art, music, voice-acting, atmosphere? A+. Combat? Kind of B-. Hades feels like a response to that, a Supergiant game that focuses on the fighting and elevates it to the absolute top-tier. This isn't a spoiler because you've looked at the score, but they nailed it. The combat's fantastic.

Hades doesn't short us on the other stuff either, though it easily could have. It's a roguelike, or a roguelite, or an action-RPG with permadeath. Whatever you call it, it's a genre where story is secondary, either hidden away in the lore encyclopedia or otherwise in the back seat—the back seat of one of those cars with a window separating it from the driver.

Not so in Hades, where every character is fully voiced and has more to say with every run. You're Zagreus, son of the death god, prince of the underworld. You believe the whole "ruling in Hell" thing is overrated, so with the help of your distant Olympian family you're going to fight through every shade, fury, and other mythic monster between you and the surface to escape. Because fuck you, Dad, that's why.

The best Greek myths are about gods and heroes, and when ordinary mortals are involved they boil down to fairytale morals about how you should obey your weird husband no matter what because he might turn out to be the West Wind. Hades knows this, and focuses on legendary characters like Athena and Achilles, painting them in broad archetypal strokes. My favorite's Dionysus, god of wine, hedonism, and everybody just being like really cool, but everyone from long-suffering fury Megaera to layabout Sisyphus is brought to life, with a solid vocal portrayal and art like they stepped out of a Mike Mignola comic.

Where other games hand out story as a reward for success, Hades uses it to reward failure. With each death Zagreus is sent back to the House of Hades where his father judges souls and legends gather. Doing a circuit of the court to see what new things they have to say (and give Cerberus a pat), lets you wind down and take a breath after your latest death has left your hands shaking. When I die in Dead Cells I want to quit, but in Hades the sting's immediately removed because I get to chat with an embodiment of night and see what's up with Orpheus. Then, back in the zone, I buy another round of upgrades and try again.

At the start of each run you pick a legendary weapon, like the Aegis shield, accept a boon, like the one from Dionysus that adds hangover damage (read "poison") to your attacks, and enter the first of the underworld's three realms. They're made up of randomized chambers where a set number of enemies spawn, you vanquish them, collect a reward, and enter the next chamber. 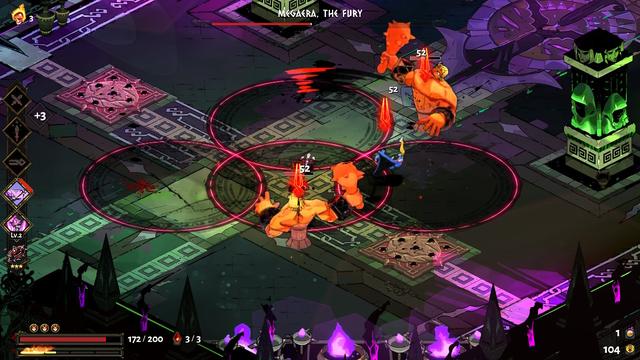 Every weapon's agreeably unique. Hold down attack with the shield and you'll block, then bull-rush forward. Its special lets you bounce it off enemies then catch it like Hellenic Captain America. The spear can also be thrown and recalled, but only comes back when commanded, letting you reposition first and line up new shades to skewer, while its hold-down attack is an area-of-effect spin. Then there's the Adamant Rail, which is literally a gun, complete with grenade launcher attachment.

In addition you've got a ranged attack called a cast and can unlock a call, an ultimate granted by whichever god you've got favor with that's earned by filling up a god gauge. I often forget about the call because that gauge doesn't stand out beneath the attention-grabbing red health bar, though sometimes a text pop-up will remind me (probably because the game knows I rarely use the thing).

The real star in your arsenal is a dash that can take you through enemies and objects, and combines with attacks for a dash-strike. Whoever's responsible for the timing and animation should pat themselves on the back, because dashing feels great, whether used to backstab a skeleton, or to warp through a column just as the minotaur charges so he slams his cowlick into a big lump of marble instead of me.

Mobility's essential, not just to avoid attacks but to set up wall slams for bonus damage, trigger traps then dash out of the blast zone, and knock down support columns to bring down chunks of masonry. Getting into a rhythm, launching a combo then zooming around the battlefield like I've got wings on my sandals, puts me in such a focused flow-state I don't notice the soundtrack accentuating the action. If a game can distract me from Darren Korb rocking out then it's doing everything right.

What Hades' combat reminds me of is Bastion's dream challenges, especially when played with oddball late-game weapon combinations. Bastion's combat was seen as its weak spot, but my hot take about a game from 2011 is that the fighting ruled actually, and Hades feels like an evolution of it—only invoking gods in Hades gives blessings instead of curses and upgrades can be bought mid-run as well as back at your hub.

I should talk about the upgrades, yeah? Gold coins, obols from the eyes of the dead, can be spent at Charon's shop when it pops up in a chamber for temporary buffs and heals, while shards of darkness can be spent in the House of Hades for permanent upgrades, like backstab damage or the ability to defy death and come back at half-health when you'd otherwise fall. Gems buy renovations for the hub but also for the underworld, adding rooms with healing pools or urns that can be smashed for obols.

I haven't even mentioned the diamonds, titan blood, and other currencies later in the game. It may sound like a bit much, but it's handed out at an even pace, and the steady improvements feel balanced to my own improvement as I play. Shortly after I got used to working cast attacks into my dash-reliant tactics, I bought an upgrade for more damage to anyone I've used my cast on. There's a parity between its rewards and my own skills, both pushing me further. It's the most I've been engaged with a roguelike's upgrade tree since Rogue Legacy.

That's half of what keeps me coming back to Hades, and the other half is the unfolding story of Zagreus. He could easily have been the worst flavor of videogame protagonist, an angry buff princeling smoldering with generic rage. Instead it's his father Hades, a goth beefcake Santa who spends all day shouting at paperwork and moaning about his underlings, who fills that role. Zagreus is likeable, with a wry sense of humor, and when Hades sarcastically asks how the latest attempt at trashing the realm goes he replies, "My ransacking was a delight, thanks for asking." The prince also just seems like a decent person, listening to shades when they talk about how they died, appreciating the house servant who is also a severed gorgon head, and taking note of who the employee of the day is while saying, hey, good for you, Achilles.

Sure, I want every run to end in victory, but I also want to buy that music stand for the throne room, unlock all the keepsakes, and see how this romantic subplot plays out. Like Orpheus I look back, only unlike him I'm happy to keep repeating this cycle.