The natural progression of a game of Heroes of the Storm is having a distinct early, mid, and late game. I would consider the late game to begin once the first fort has been destroyed. When this happens, the team that destroyed it is allowed to roam around the map more freely, with reduced enemy vision. Without the safety of a fort, a team must stay together more, in order to protect each other. From this concept, along with other factors, we get a stage of the game filled with more five on five fights towards the end of a game.

In order to describe the style of gameplay at this part of the game, I could discuss the overarching decisions that you can make later in the game, depending on each situation. However, if I did this, many concepts would be repeated from my last post about the strategies of mid game. While many strategies are different, and very important, I believe it would be more beneficial to discuss instead, the different ways that you should approach the late game, based on what class you are playing. These different classes are assasins, specialists, healers, and tanks.

The role of an assassin late game is to stay safe, and deal as much damage as possible. This means, in general, that you position yourself to be behind your tank / front line, so that you have defense against the players on the enemy team trying to get close to you. While idealy you would attack their high priority targets, attacking their front line while you cannot reach other enemies is always a better option than not attacking. You want to be patient, and wait for an opening to attack your primary target, to where you can extend yourself into the enemy team without putting yourself in danger, or at least, without ensuring a kill yourself. 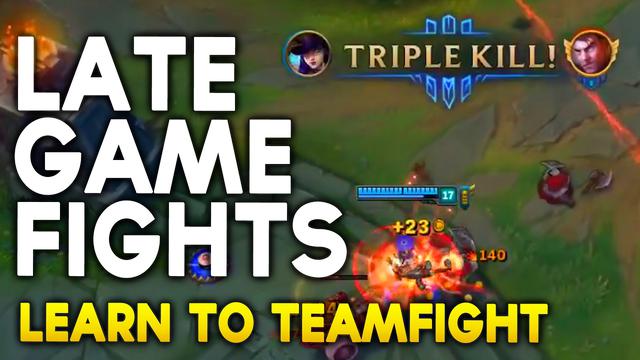 As a specialist, you must strive to find a balance between utilizing your strength as a specialist (be it taking mercenary camps, pushing lanes, or taking towers), and being with your team to team fight. This depends in the most part, on what your team composition’s strengths are, and how you are doing during the game. If your team is based on getting ‘picks’, or going all in to get kills, it is better to stay with your team, get a kill, and then do what you excel at, with extra safety. If your team gets stronger later on, or is good at poking down your enemies and stalling, then trying to separate yourself from your team and getting advantages from the map is your best bet. Of course, if you are far behind, this is the best course of action regardless, as you want to avoid fights.

As a tank, your job is to protect your team. You want to have the enemy team be attacking you instead of your team, whenever you can help it. This means you should always try and intervene to assist your teammate in escaping, as long as it doesn’t ensure you both will die. How you protect your team depends on what kind of threats they have. If most of their damage is coming from people who sit far back, safe, doing damage, your role should be to dive far into enemy lines in order to disrupt them. If their damage is trying to get up close to your team, you should try to disrupt that, and protect your team, if possible. What choice you make in this regard changes from fight to fight, and you can change during a fight as well.

Your role as a healer is simple but intricit, keep your team alive. Since your main contribution is healing and not damage, in most cases you should be the safest and most protected player on your team. This also means you are one of the highest priority targets. Positioning on healers is the most important, as you must keep yourself close to whoever on your team is in danger, while staying out of danger yourself. There is no simple rules to follow for this, as every fight is different, but the most important thing to keep in mind is that keeping yourself alive is more important than keeping any other player alive. You can leave someone to die, but you can keep on healing your team.