Legend of Zelda: A Link to the Past - IGN

On the surface, it looks like Nintendo went the cheap way out by simply converting the admittedly outstanding Super NES adventure The Legend of Zelda: A Link to the Past to the Game Boy Advance as the system's first official Zelda product, pretty much pixel-for-pixel in graphics and note-for-note in sound. It's a fantastic game in its own right, but the GBA has proven time and again that it has significantly more potential in capabilities than the Super NES ever did, and a conversion of an early generation 16-bit title hardly impresses on a technical scale. But put that thinking aside, because the developers didn't just put out a simple port for Zelda fans; the secondary selling point of the game cartridge, The Legend of Zelda: Four Swords is a deep, thoroughly designed, and absolutely fun multiplayer experience that's based around the established Zelda gameplay mechanics. It's here that the cartridge really shines, and makes the purchase of the game an absolute necessity for Zelda fanatics and GBA owners alike.

Accurate portable conversion of the SNES A Link to the Past Multiplayer-only original adventure Four Swords Cartridge save (three slots) Link cable support for four players (multiple cartridge) Future connection with Legend of Zelda: The Wind Waker GameCube Only for Game Boy AdvanceAll Zelda fans should know exactly what they're getting into with the Game Boy Advance conversion of A Link to the Past. The original game released back in 1993 for the Super NES is still revered as one of the best games released in the series, even among the more recent 3D releases on the Nintendo 64 system. The game takes place way early in the admittedly wonky Legend of Zelda chronology. As the elfish adventurer Link, players head off into the huge overworld to rescue the princess Zelda from the castle dungeon; as players save her from the lock-down, they learn that an evil wizard Agahnim has put the land under a cursed spell, and it's up to Link to grab the Master Sword and break it. But anyone who is familiar with the story, or Legend of Zelda games in general know that this is only the beginning of the adventure...

The Game Boy Advance game is a 100% accurate port of the Super NES game, right down to the pixel. The GBA game uses all of the original art assets from the game released in 1993 for its graphics, which admittedly look a bit dated to today's standards and what the GBA can actually pull off. But it remains extremely faithful to the original, which will definitely please videogame purists; any slight alteration of the original game and you could definitely hear all the fanboy comparisons to the original SNES version. The only real changes in gameplay are alterations on where certain non-essential objects are located; a tree that always dropped a rupee gem when rammed now unleashes a fairy, which eliminates the exploitation of unlimited funds from the original game. And, of course, the screen resolution means that the GBA has to scroll a bit more than the Super NES version did, but the original SNES game didn't require any real long-distance action, so this "cropping" does not hinder gameplay at all.

And while the music isn't quite as "crisp" on the GBA system, the handheld hardware does a wonderful job pulling off all the audio from the classic. But, just as Nintendo couldn't leave the past Super Mario games alone, the company insisted on adding to the sound effects by giving Link grunts, shouts, and yells, lifted from the samples used in the previous N64 adventures. It would have been a decent inclusion had it been used sparingly, but man, it gets annoying when every slash of the sword results in an audible grunt from Link. Every single one. It's cool that Link now lets out a yelp when he falls off a ledge or bites the big one, but a shout every single time he uses his sword? Yes,after about five hours into the quest your mind may grow used to this sound effect, but as it stands, the developers should have gone easy on the Link yelps. 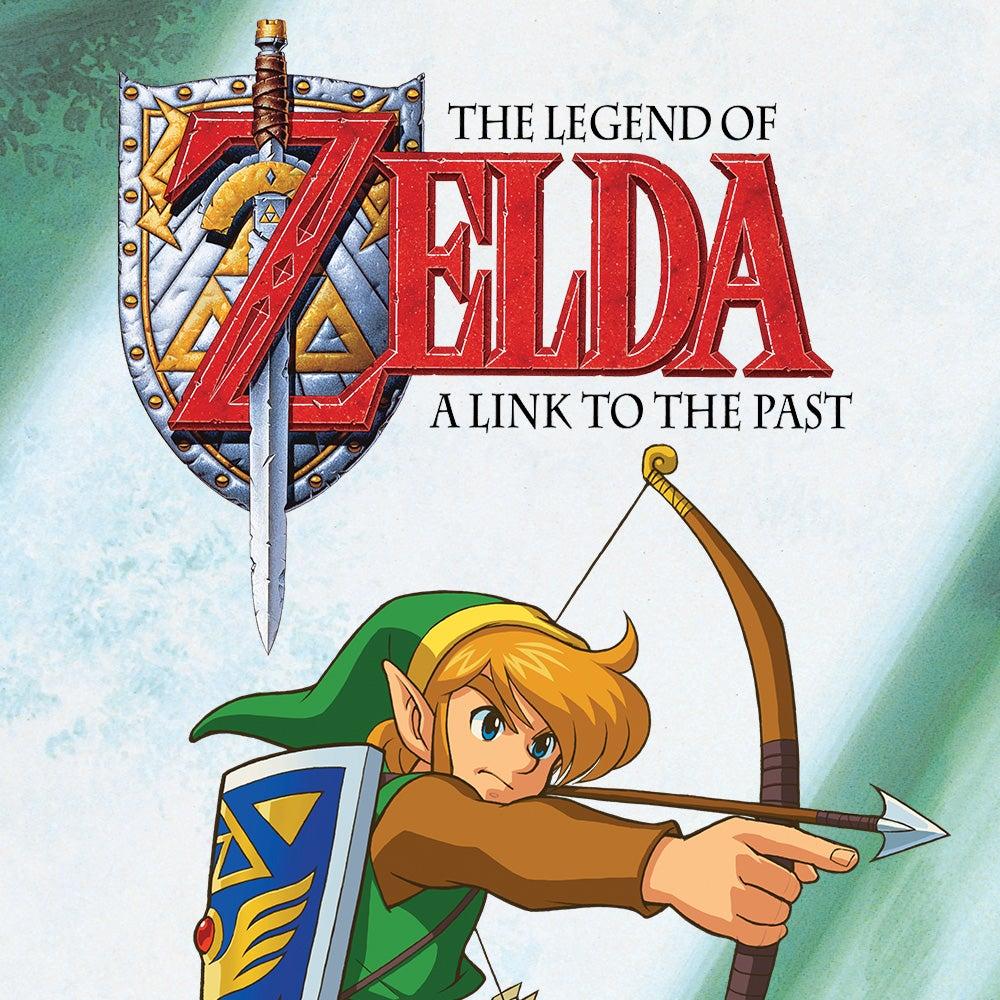 But it's the gameplay that matters, and even today Legend of Zelda: A Link to the Past holds its own as one of the best-designed action-adventure games ever created. For those not quite familiar with the way the Zelda design works, A Link to the Past features a huge overworld with several dungeons in which players will have to shove boxes, trigger switches, and destroy enemies in order to progress to the end where a very large boss creature sits and waits to crush Link into a pulp. These dungeons are pretty much the core of the Zelda gameplay, and it's these areas that give the game most its challenge. Each dungeon (there are at least a dozen of them in A Link to the Past are both extremely fun and, in many cases, extremely frustrating...but in an amusing sort of way. This game was the first Zelda game to utilize alternate-world travel; players will have to hop back and forth between the light and dark world to solve puzzles and get through certain challenges. There are times that, yes, you'll get stuck, so taking a step back to figure out the best (and usually only) course of action in the specific area is definitely encouraged. When all is said and done, A Link to the Past is a lengthy 20 to 30 hour adventure for folks who don't remember every little element from the SNES version. Those with the upper hand with prior knowledge of the classic adventure can probably breeze through it in a dozen. But whether you're a newbie or veteran, you ain't seen nothin' yet.

The secondary game option, Four Swords is an absolute must-play. Anyone who puts this cartridge away after completing A Link to the Past will be missing out on one of the best system link games ever created, and it's this mode that will set the watermark for what the GBA's game link support can pull off. Four Swords isn't a simple rehash of A Link to the Past's graphic engine in a multiplayer deathmatch, no sir. This is a completely separate game development that shares only the cartridge in which A Link to the Past sits.Four Swords occurs during the same time structure as the upcoming Legend of Zelda: The Wind Waker for the GameCube, which explains the completely changed character sprite structure of Four Swords. In the game, players must rescue Zelda from the clutches of the evil wind sorceror Vaati. But the challenges ahead are impossible for a single adventurer; to assist Link in his quest to rescue the princess, fairies use the power of the Four Swords to duplicate the hero...four times the Link. Silly premise, I know, but all you have to know is that each player controls a different colored Link.

The Four Swords is essentially broken up into four different areas, each with its own network of dungeons. The first dungeon is an expansive tutorial area that explains the varying items and how they work in the other three different areas. The level designFour Swords varies between standard Zelda fare to absolutely brilliant use of cooperative gameplay mechanics; this isn't a simple Gauntlet clone. Game designers have worked in many of the ideas from past Zelda games, from triggering pressure switches to shoving statues and lifting boulders. But many elements must be done in unison with one, two, or three other Links. Massive boulders blocking the way, for example, require all Links to work together to lift and move off to the side. Some creatures can only be destroyed if two players work together -- one cool creature in particular must be pulled apart to eliminate, with a Link on either side yanking in opposite directions. There are several items in the game that must be utilized to get through, and players can only hold and utilize one item at a time; whatever item they were holding at the time they picked up a different item is dropped in place of the new item. Magnet Gloves can get players across chasms if they aim at a magnetic block...and they can even grab onto distant Links by latching onto their magnetic Shields, pulling them across the hole as well. And the Gnat Hat is an interesting addition, as players who wear the hat will shrink to the size of a bug (basically a couple of pixels tall on-screen) in order to pass through tiny tunnels or across bridges and platforms that a normal Link couldn't fit. The game's full of all sorts of objects that require solo as well as cooperative techniques to get through the extensive challenges. What's more, the game design is intelligent enough to only offer dungeon designs with the amount of players in the network in mind. So, even though the game allows for up to four players to cooperate and compete in the dungeons, the designers realized that this wouldn't always be the case; if only two or three players are in the current network, it will only put forth challenges that only two players need to cooperate...which means, no four-player puzzle elements will enter into play.

This mode is where most of the development time obviously went, because everything about it, from the graphics, sound, gameplay, and interface, are done superbly. This multiplayer mode even incorporates extras that are earned in A Link to the Past; if a special sword technique is earned in the main single-player adventure, it can be used by that player in Four Swords. And those that complete the entire Four Swords adventure can unlock original dungeons and mini-quests in A Link to the Past, unique to the GBA game. So, if the fantastic multiplayer gameplay isn't enough encouragement, the extra quests in the single player adventure should seal the deal.

The link support is near flawless; it keeps track of all four players in the chain no matter how far back or ahead of the pack they go, and it also allows for a decent number of enemies to appear on-screen at once. The action will slow down on occasion when rupees spill onto the screen in a large amount, but from a technical standpoint occasional slowdown in a four player chain during not-so-intense moments is perfectly acceptable.It's an amazingly fun multiplayer experience, even if it tries the patience of everyone in the network chain. Everyone will be yelling at each other from not working together, or accidentally knocking someone off the ledge, or stealing each other's rupees. Even though players will be working together to complete the dungeons, ultimately, they're working against each other to earn the most rupees to collect the level's medallions. And as chaotic as that sounds, this element is one of the many reasons that makes Four Swords such an awesome mode that should not be missed by anyone.