The nonsensical delight of Maneater's shark-RPG premise made for an amusing if somewhat repetitive campaign last year, but the recycled ideas of its new Truth Quest DLC don’t do much to stop that novelty from wearing thin. This expansion mostly offers more of what you’ve already seen, sending you on familiar missions to eat hapless humans, destroy boats, or kill fellow sea dwellers. You’ll still get to hear hilarious narrator Trip Westhaven (once again voiced by Archer’s Chris Parnell) say outlandish stuff while you explore a new area of Port Clovis, and it’s still exciting to kill-or-be-killed by bounty hunters who bear down armies upon you in an effort to taste your delicious shark meat. These activities are just as fun as they were in the base campaign, but unfortunately they’re just as monotonous too.

Having finished his documentary about a bull shark and Scaly Pete, Maneater’s narrator has naturally now gone full conspiracy theorist, sending you on a quest to uncover the truth that the Illuminati satanic lizard people are hiding... or whatever. What you’re actually after isn’t very well explained, but the story ultimately unfolds into a by the numbers hunt for a creature called the Atomic Leviathan. As over-the-top premises go, seeing Westhaven go from eccentric documentarian to babbling conspiratorial psychopath is entertaining and well written, even if a lot of the things you’re doing along the way feel extremely similar to when he was sane.

What We Said About Maneater

"It’s absolutely fun to play as mutant Jaws on steroids! Maneater chews the metaphorical scenery as often as it has you devouring humans and the diverse aquatic inhabitants of the Gulf of Mexico, and that’s some good dumb entertainment – for a while. But if you’re wondering whether its shallow combat and simplistic upgrades can sustain that excitement for the roughly 15 hours it takes to become a hulking megashark and reach the end of its uninspired satirical revenge story… it cannot." -Dan Stapleton, May 22, 2020 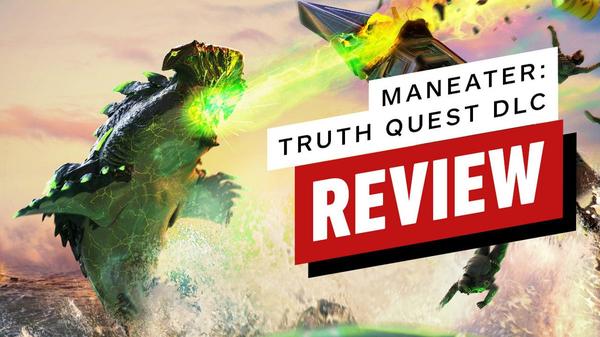 However, that’s not to say that there is nothing new in Truth Quest. There’s a fantastic new evolution set that turns you into an irradiated demon of the sea with the ability to shoot lasers out of your mouth like Godzilla. This new ability is cool, but it’s also so overpowered that there’s little reason to use anything else, as you’re able to blast apart even the toughest enemies with relative ease. Watching helicopters get knocked out of the sky and people explode as you melt their faces with it never really gets old, but its mere existence also undermines a lot of the other combat choices you could be making.

Alongside the new body mod there are five new organ evolution mods, an added organ slot, and an increased max level of 40 (raised from 30 in the base campaign). None of these are real game changers aside from the organ mod that lets you heal over time, but at the very least they give you some carrots on a stick to grind toward as you work your way through the new region and hunt a mysterious new predator.

The new laser attack is so overpowered there's little reason to use anything else.

One thing that does manage to stand out is how much Truth Quest makes use of Maneater’s Whipshot attack, which lets you grab grenades, torpedoes, or other explosive projectiles thrown at you, and tail-thwack them back at your enemies. While the Whipshot wasn’t required a whole lot to get through the original campaign, it’s absolutely necessary in Truth Quest as some enemies can only be hit from a distance. You can use this to satisfyingly destroy structures or helicopters that would otherwise be out of your reach, or to do serious damage to high level enemies.

The only issue is that you can’t use the Whipshot unless you’ve got AI enemies throwing explosives at you, and sometimes they don’t when you really need them to. Or they do, but they throw them so incompetently that you’ve gotta flail around desperately trying to grab one before they explode, probably taking more damage in the process than you would have if you’d have just gnawed on whatever it is you’re trying to blow up.

Speaking of dimwitted AI, the humans and sea creatures that are usually pushovers up their game slightly in Truth Quest, now coming after you with helicopters, massive warships, and freaky new radiation powers that can seriously mess you up. Seeing the new weapons of war for the first time is a thrill, especially facing off against helicopters – leaping into the air to chew on one of those metal dragonflies is just delightful. Normally all these new enemies would present a pretty lethal challenge… but since you can shoot lasers out of your doggone mouth now, they’re never actually an issue. Oh, the joys of power creep.

Outside of combat, there’s a new kind of side quest called Time Trials, where you literally and figuratively jump through hoops to complete a circuit in time. That helps break up the routine a bit, but Time Trials aren’t particularly exciting overall. Racing around the sea is already something you spend quite a lot of time doing in Maneater, so getting timed while you do it isn’t exactly adding much new to the experience. But at least now Chris Parnell will make fun of you as you struggle to jump through rings of fire. That’s always nice.

The DLC's short-lived campaign only lasts a handful of hours.

There’s also a new “collectible” in the form of tinfoil hat conspiracy theorists who hide in hard-to-reach places and spout nonsense before you eat them, which can make for some good, murderous fun. But aside from those thin additions, all the new missions in Truth Quest are nearly identical to stuff we’ve seen before, like eating a certain number of humans or hunting an apex predator that presents a limited challenge. It’s actually surprising how many ideas are re-used, which sometimes feels like it could have been a part of the original game with how little it distinguishes itself.

Truth Quest’s short-lived campaign only lasts a handful of hours, even for a completionist run, but the finale, which has you facing off against the Atomic Leviathan itself, is an absolute highlight. This irradiated monstrosity is unlike any boss encounter in Maneater before it, and feels like a proper kaiju-like monster fight. It doesn’t quite justify a lot of the repetitive questing it takes to track him down, but it at least serves as an enjoyable finale to an otherwise unremarkable expansion.

Truth Quest doesn’t add much to Maneater’s shallow sandbox, but the stuff it does add is over-the-top, ridiculous fun. Unfortunately, it’s buried under even more mindless quests in a repetitive RPG that really didn’t need more of them. The cool new atomic powers, amusing dialogue from the narrator, and excellent final boss are highlights, but are barely enough to make the rest of this return to Maneater’s seas worth your while.