This version of rules for Mexican Train is based on the original, “official” rules by Roy & Katie Parsons ©1994 and copyrighted byPuremco, Inc. in 2005. They were written by David Bauguess in 2007 for ease of use. These rules use a popular alternative rule for playing doubles that adds strategic interest to the game. Mexican Train can be played with various size domino sets (double-6, double-9, double-12, etc.). These rules assume you are using a double-12 or double-9 set. (For a faster game with 2 to 4 players, use a double-9 set, or remove the 36 tiles with 10 or more pips from a double-12 set.)

Object of the Game

Be the first to play all of your dominoes, or at least as many high-point dominoes as possible, in each round. The lowest total score at the end of all rounds wins the game.

Depending on which domino set you are using, find and set aside the double-12 or double-9 domino. Turn the other dominoes face down and shuffle them. Each player then draws the number of tiles shown in the chart below. The remaining tiles are gathered into one or more "train yards" or "bone piles" that are used for draws during play. Place the starting double-12 or double-9 domino on the table, centered between the players in a centerpiece or hub designed for holding the double and starting the trains, if you have one.

Next, each player uses his drawn tiles—hidden from view by the other players—to form apersonal train. Do this by matching the denominations, beginning, if possible, with a domino that matches the double domino in the center, called the engine. (If there is no tile in the hand that matches the engine, formation of the train may have to wait.) Dominoes that do not fit in the personal train remain in the player’s hand as “extras.”

Designate a player to start the game. Thereafter, rotate the starter of each round in clockwise order.

If you are the starter and you have a domino that matches the denomination of the engine tile, you have two play choices: either start your personal train or start the Mexican train—a line of end-matching dominoes that must begin with the same denomination as the engine tile. Once the Mexican train has been started, it is normally an eligible train for all players. If desired, a marker(explained below) can be placed and left on the Mexican Train to indicate it is an eligible train for play. If you are unable to play, see Unable to Play & The Marker below.

After you have played a tile, play moves clockwise to the next player. The subsequent players start their play in a similar manner. If the Mexican train hasn’t been started, any player can start it during their turn. Other play options are covered in the next section. 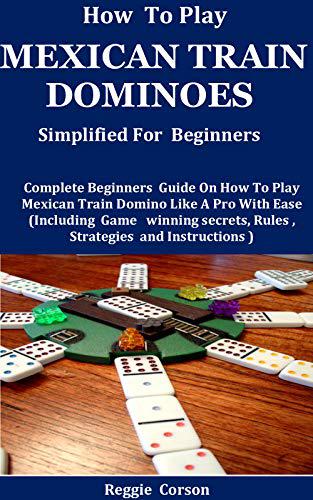 @IndustriesGame Been watching this one a long time. I know @0BurkeBlack0 has, as well. Huge fan of RTS & Strategy g… https://t.co/PoM5Kj9gWy

With the exception of playing doubles (covered below), you are allowed to play one playable (end-matching) tile during each turn, if you can. Assuming you have one or more playable tiles, the usual “eligible” trains you can play on are: your personal train, the Mexican train, or any train with a “marker” (explained below). If you do not have a playable tile, draw a tile from the bone pile and play it if possible. If you have a playable tile, you must play, even if the playable tile has to be taken out of your personal train line-up in your hand. It is not an option to not play, say, for a strategic reason!

Unable to Play & The MarkerIf you are still unable to play after drawing a tile, place a marker (e.g., a penny or small train marker, if included in your domino set) on your personal train near the end or where the train will begin, if it hasn’t yet been started. Your turn then ends and play goes to the next player. A marker on a train signifies the train is eligible to be played on by the other players. While there is a marker on your train, you can still play on any eligible train during your subsequent turns.

The End of PlayTo avoid any question as to when a turn is completed, it behooves the players to agree on a “rule” that defines the end of play. For example, once the player’s hand has been removed from the played tile, the turn is over and the play cannot be changed.

Removing a Marker A marker on your train remains there until you play on your personal train during a subsequent turn. Once you have played, you are obligated to remove your marker, making your train ineligible to the other players.

Double Dominoes There are rules pertaining specifically to the play of doubles.

A double tile is placed sideways on the train. [See illustration above.]

An Open DoubleIf, after a player’s turn is completed, the double is open (not played on), all other trains become ineligible for all players until a player can play on the open double, which is to say the double must first be satisfied or closed before any other trains—marked or unmarked—can be played on. If subsequent players cannot play on the double after drawing, they must place a marker on their personal trains. Once a player has satisfied (played on) the double, all players are then free to play on any eligible train.

Playing Two or More DoublesDuring your turn, you may play two or more doubles in succession. After your last double is played, you must play an additional tile, which is not a double, on any eligible train. NOTE: Doubles must be satisfied in the order they were played, so the only eligible double for the additional tile is the first one you played. Consider this when you play the doubles!

Because you are required to end your turn by playing a non-double, you must draw if you don’t have one. If your draw is a playable double, play it and draw again. (There is no limit to the number of doubles you can play in succession.) Your turn ends when you either play or cannot play a non-double tile. If you can’t play, place your marker on your train.

If after your turn, a double remains unsatisfied, each subsequent player (including you) is obligated to satisfy it if he can. If there are two or more open doubles, they must be closed (one per turn) in the order they were played. The rules above for “An Open Double” apply; so, if subsequent players cannot satisfy the double, they must place a marker on their personal train. If it is not possible to close a double because all 13tiles of that denomination are played, that unsatisfied double no longer restricts play on eligible trains. However, if any other double is open, the restriction remains in place until it is satisfied.

When there are no more tiles in the bone pile, a player must pass if he does not hold a playable tile, and then place a marker on his train.

When a player has only one tile left, he must notify the other players by tapping it on the table. (In addition to or instead of tapping, you might want to require that it be announced verbally and/or indicated in some other way.)

A round ends when a player has “dominoed” (played his last tile, even if it is a double), or when the bone pile is depleted and no one can play and the game is completely stalled.

Each new round begins with the double that is one number lower than the engine in the last round (12, then 11, then 10, etc.). Find and set aside the double before shuffling the dominoes. All trains, including the Mexican train, must begin by matching that double. The blank double is the engine in the last round, meaning that a full-length game with double-12 dominoes consists of 13 rounds.

Each player counts the number of pips on his unplayed tiles and gives the number to the scorekeeper, who at the end of the final round totals each player's points. The player with the lowest total score wins.

The rules do not cover infractions, such as drawing a tile when there is a playable one in the hand; or, when a player fails to notify the other players that he has only one tile in his hand. To keep the game moving smoothly, it is suggested the players decide in advance how such situations will be handled when they arise—forgive or penalize. If it is decided there will be a penalty, you might continue normal play without correcting the error, but require the player who broke the rule to draw a tile, keep an already drawn tile, or skip their next turn.

Summary of the Rules of Play

During your turn you may play one tile. (Playing doubles is an exception covered below.)

Any player may start the Mexican train during their turn.

If you have a playable tile, you must play.

If you cannot play, you must draw a tile from the bone pile and play it if you can.

If you are unable to play, you must place a marker on your train. A marked train is eligible for play by all players. The marker remains on your train until you play on it.

When there are no unsatisfied doubles, the trains eligible for play are your personal train, the Mexican train, and any marked trains.

During your turn you may play one double or as many doubles in succession as you can play on any eligible trains. Then…

The following rule applies to all subsequent players:

Doubles must be satisfied in the order they were played, so if one or more doubles remain unsatisfied, your only eligible play is to satisfy the next unsatisfied double. Of course, the rule to play, draw and play, or mark your train, applies.

If a player shows the other players that all the non-doubles needed to satisfy a double have already been played, then at that point, there is no obligation to satisfy it, and that train is no longer playable. Tiles that were drawn in a prior attempt to satisfy the double cannot be returned to the bone pile!