Review: 'NEO: The World Ends With You' : NPR

Buddies Rindo and Fret fight for their lives on the streets of a strange alternate Tokyo in NEO: The World Ends With YouSquare Enixhide caption

Buddies Rindo and Fret fight for their lives on the streets of a strange alternate Tokyo in NEO: The World Ends With You

Just seconds ago, you were walking across the city street. You headed to the ramen shop for a quick bite. You open your eyes, delirious and confused, and find yourself collapsed in the middle of the crosswalk. People are walking right past you as you reach out for help. No one can see you. In your pocket you find a black pin with an ornate skull and crossbones design.

In 2007, co-developers Square Enix and Jupiter released The World Ends with You for the Nintendo DS, an inventive Japanese role-playing game unlike anything that came before it. The story takes place in a sort of Limbo version of Shibuya, Japan, an alternate dimension in between life and death where you compete with other players in the Reaper's Game — a chance at redemption, a second chance at life.

Just what is the "Reaper's Game"?

14 years later, Square Enix and new development partner, h.a.n.d., give gamers a second chance to enjoy the stylish, loud and ominous world of Shibuya in NEO: The World Ends with You. The sequel to the 2007 masterpiece follows a new cast of manga-esque characters as they fight for their lives or face permanent erasure.

NEO opens with our protagonists, best friends Rindo and Fret. The two find themselves in a Shibuya that feels ... off. Their phones start sending them strange notifications about daily missions, and they meet eccentric characters that reveal sinister details about this alternate dimension. And perhaps the most bizarre are the monsters that roam this "other" Shibuya, animal-like creatures with limbs that resemble graffiti that's been yanked out of the city's dark alleys. 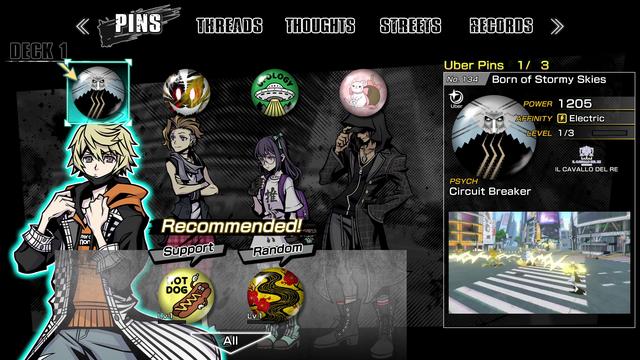 Fighting the beasts known as Noise.

These artistic beasts are called Noise, and it's an ideal name considering that the game places a significant emphasis on music. Takeharu Ishimoto, the composer for both games, has expertly crafted a soundtrack unlike any I've heard in a video game. He blends elements of rock, pop, hip-hop, electronica and even metal to evoke the vibrations of Shibuya. The World Ends with You punches you as you play; the hip-hop beats add a tangible energy and the rock has me tapping my feet as I fight Noise. Ishimoto also includes lyrics in his in-game masterpieces, and it's a great choice; it forces players to focus on his creation while they play. Rather than tune out the music like you might in a game without lyrics, it encourages you to listen and absorb as you slink through Shibuya's corridors.

Beyond music, NEO shares a lot with its predecessor, as you might expect from a sequel. Square Enix retained the incredibly detailed anime art style that plants you directly into Japanese culture and fashion. The main and supporting characters all have distinct looks, whether they're sporting big belt buckles or brightly-colored hair.

The game has a vibrant economy of food and clothing shops where you can get items that change your stats.Square Enixhide caption

The game has a vibrant economy of food and clothing shops where you can get items that change your stats.

Fashion weaves its way into other aspects of the game, too. Similar to other RPGs, dressing your character often comes with stat boosts. Wearing a certain pin or hat or shirt may grant you different combat abilities, extra health points or attack power. But unlike more basic RPGs, clothing in The World Ends with You is branded; you aren't just wearing an "assassin's cloak," you're wearing in-game brands like Joli bécot or ConyxCony. It makes the items you buy more memorable while still maintaining their normal video game function.

The World Ends with You got a major graphics upgrade in NEO, which was to be expected on more powerful consoles (Switch and PS4) and 14 years of development. NEO's Shibuya is far sharper than its predecessor, and the pixelated borders from before have been smoothed out. I played NEO on the Switch, and it looks great, both when the Switch is docked and in handheld mode. At times, NEO lagged a bit when the Switch was docked, but it didn't bother me too much during my hours with the game.

The upgraded graphics really shine in NEO's combat. It went from clunky and two-dimensional to 3D and dynamic. Using your psychokinetic abilities in a fight is a joy, especially when you find out how many synergies there are between your characters. When I first started playing NEO, I thought the fights were a little repetitive, but as I learned how to time my attacks and use the correct abilities, it made fighting the same enemies entertaining.

Despite its graphic overhaul and combat improvements, NEO doesn't quite capture me like the original The World Ends with You. In the sequel, the main characters are cliche; Rindo is unconfident and indecisive, Fret is maybe a bit too happy-go-lucky, and Nagi (she joins the team later) adds the occasionally funny, but mostly annoying quip. In the original, Neku, the brooding, headphone-donning teen, learns compassion as he's forced to forge relationships with other players or risk permanent death. It felt like the stakes were higher in the first installment, like you actually needed to complete your missions or meet your doom.

Sequels are better than remasters. I'm glad Square Enix and h.a.n.d. gave us this revival after 14 years — but at the same time, I wanted what the original game gave us: memorable characters and a gripping story with twists and turns. I'm grateful for the improved graphics of NEO, but if I had to take shoddier graphics with a better story, I would. I want to feel the way I did 14 years ago, and while I did like NEO, it didn't drag me into an ominous world filled with eccentric Reapers and deadly Noise as ruthlessly as the original did.

Keller Gordon is a columnist for Join The Game. Find him on Twitter: @kelbot_