If you told me that Serious Sam 4 had been pulled out of a time capsule that was buried 10 years ago, I might've believed you. It's not a throwback in the way something like Amid Evil is. It hasn't fashioned the technical limitations of the past into a new style. It's 100 percent genuine jank: Battle music that abruptly ends the moment the last enemy is killed, cutscenes that abruptly start the instant a boss dies, clothing and dirt and rock textures that pop in and out, rigid and weightless animations, and level events that occasionally fail to trigger, or won’t happen until you hunt down that one last enemy who got stuck running into a wall.

At least the jank is endearing (mostly), and Serious Sam 4 is fun—like the other Serious Sam games it's still about murdering overwhelming hordes of aliens with enormous guns while moving backwards at the speed of a figure skater. You're always on the verge of being overtaken, gripping the edge of control as you shoot at cyclops beasts and kamikaze guys and vampires and insectoids, putting just enough space between you and them to give your bullets room to travel. That tension sustains almost all of Serious Sam 4's 10-or-so hour campaign, which is playable solo or in online co-op.

Serious Sam 4 lets you have a few Braveheart moments.

Bullet-hosing hundreds of beasts is satisfying in the way power washing a house is, but I also enjoyed occasional finesse shots with the overpowered Devastator, and showy maneuvers that I did just for the hell of it. In one of my favorite scenes, I charged across the French countryside wielding dual double-barreled shotguns at a bull that was charging back at me. I waited until I could see the glow of its demon eyes before firing both guns into its forehead, and then reloaded them simultaneously (how?) while dodging out of the way of its tumbling corpse—just for style points, as it would've clipped through me. Rarely in shooters is it a good idea to face enemies head on in the open, but Serious Sam 4 lets you have a few Braveheart moments.

A small but notable change makes that scene possible: In Serious Sam 3 (which is actually 10 years old), you have to stop sprinting before shooting, and there's a brief animation where Sam re-readies his weapon. In Serious Sam 4, you can just cancel the sprint animation by firing, and the shot is taken instantly. The change speeds things up for the better. It's a lot of fun to sprint behind enemies who have front-facing shields and snap out a couple of shotgun blasts to their backs. 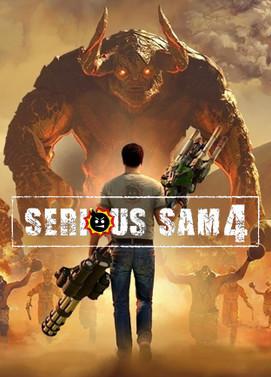 Serious Sam 4 is different from Serious Sam 3 in other good ways, too. The aliens are more colorful and distinct—more like Killing Floor's Zeds—and the awful suppression blur that was so popular back then is gone. Enemy health bars and headshot indicators allow me to optimize my gunfire in a way I like, but they can be turned off if you hate them. I also don't get stuck on the environment like I sometimes did in Serious Sam 3. It's like Sam's a giant stick of butter. He practically glides over cars.

Serious Sam 4 is at its best right after it introduces a new weapon, because it fills an arena with ammo and then throws gobs of enemies at you so that you can go wild. The cannon gun somehow fires rolling cannon balls that are larger than Sam himself and turn everything in their path to goo, and of course I was delighted when the game introduced it and then said, 'Hey, don't worry about ammo conservation, just run around this maze bowling down giant pink fleshy alien mech-guys for 10 minutes.'

At its worst it gets too methodical, but the difficulty is well-designed. Normal kept me on my toes, while Easy let me relax without it becoming a cakewalk. The fun of shooting at swarms of flying drones was overestimated (also, guys who spawn on faraway perches and shoot homing projectiles), and certain sections are tiring, but for the most part I was just harried enough, not frustrated.

Though it looks almost as old, Serious Sam 4 incorporates modern ideas that make it better than Serious Sam 3. Still, as much as I enjoyed the high framerates, I'm disappointed that the computing power available in 2020 isn't put to full use, even in service of more jankiness. The enemies don’t ragdoll hilariously, for instance. They repeat the same death animation every time, thousands of times. The big technical achievement here is that many more enemies can appear on screen at once, and that results in some impressive scenes, but once the spectacle wore off my reaction was, “Ah, great, another wave of those skeleton bastards.” You can only focus on deleting so many beasts at once.

Meanwhile, the story about seeking out the Holy Grail (actually an alien artifact) with a Russian priest is cute, but isn't going to make a star out of Sam Stone. The attempts at pathos and romance are let down by the plastic action figure character models, and most of the gags are generic.

The running joke of Serious Sam 4 is that Sam and crew are workshopping witty one-liners to say after killing big aliens (the boss fights are pretty easy and not the focus), but the idea that action heroes workshop their one-liners feels like more of a cliché than action heroes saying one-liners—action heroes don't actually do that anymore.Like Duke Nukem, Sam Stone doesn't lampoon anything contemporary (for that, may I suggest trying a brooding father?), though he’s a lot more fun to be around than Duke—less machismo, more chill.

Serious Sam 4 is just the campaign—there's no survival mode, and I wish there were—but you can play through the whole thing in four-player online co-op with customizable rules (turn on infinite ammo, if you want). I gave it a try and it works fine, although I barely noticed my co-op buddy. It's not really a game about teamwork, and there's no revive system: If a player dies they just respawn. (Not that anyone would have time to stop and revive a teammate with a hundred aliens trying to blow them up.)

There are no mod tools yet, but Croteam says they're coming soon, and there's a spot in the menu for Steam Workshop packages. That's great to see, even if I can't judge what's not there yet.

Serious Sam 4 is fun, and certain ridiculously large battles should get friends laughing together in co-op as they struggle to hose down lines of aliens with lasers. It's deeply janky, though, and the increased scale isn't quite as magical as I'd hoped. Where the new Doom games invoke the spirit of a classic with contemporary genius, this is just more Serious Sam. Still, in one part you get to drive over aliens with a combine harvester, so I recommend it.