Like the Force itself, the Star Wars: Squadrons single-player campaign is a balance. The balance between playing as both the New Republic and Empire, between arcade and simulation-style controls, and between fun and flashy action and blunt exposition dumps. It’s full of great references for fans and charming (if ill-used) new characters alike, all crammed into a series of cockpits that are accessible to jump in and pilot without dogfights feeling mindless.

Squadrons has found a sweet spot between the point-and-shoot simplicity of the classic Rogue Squadron series and the insanely detailed simulation of Elite: Dangerous. You can, for the most part, just pick up a controller and start chasing down enemy ships – but there’s also a nuance to adjusting your throttle for better turning, swapping power between engines, weapons, and shields in the style of the grand old X-Wing games, and countering missile locks. Things like that make flight more engaging and give good pilots a chance to shine without requiring you to literally learn how to fly a spaceship in order to play.

"The thrill of using incredibly detailed TIE Fighters and X-Wings to weave in and out of Star Wars: Squadrons’ (mostly) opportunity-filled maps as you duel other players in 5v5 dogfights is an absolute treat. Its flight and power management systems reward quick thinking and its customization is centered around personal preference instead of power upgrades, but it feels like there’s so much more that could be done with it all. Right now there are only two modes with six maps shared between them, alongside some simple progression to hold it all together, making my love for its flying more of a steamy affair than a committed, long-term relationship." - Tom Marks

The Empire Strikes Back

The campaign spends its roughly seven-hour run of missions jumping between the dueling perspectives of a crumbling Empire and a freshly formed New Republic just after the events of Return of the Jedi. The way it weaves the stories of two rival squadrons together sets up clever scenarios, sometimes letting you spring ambushes on your other half only to have the next mission swap perspectives so you can deal with the aftermath of your own actions. It’s very cool, and developer Motive Studios continues to prove it knows how to make a game fit seamlessly into the Star Wars universe.

Part of that comes down to its cast of interesting characters, primarily made up of your squads on either side of the conflict. Whether it’s the war-torn Imperial Shen with a battle-scarred helmet he never takes off or the mildly Force-sensitive former racer Keo on the Rebel side, each one is distinct and well-designed enough to stand out in their own way – so much so that I could see any one of them as a Knights of the Old Republic or Mass Effect companion without them feeling out of place at all. 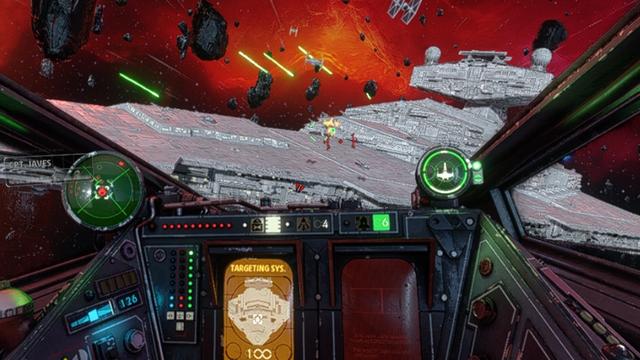 Any one of your squadmates could be a Mass Effect companion without feeling out of place.

In fact, I hope they do appear in an RPG some day, because they aren’t used very well here. Learning about them and their backstories is almost exclusively limited to optional conversations in your hangar between missions, which frequently feels ham-fisted for a getting-to-know-you exposition-filled info dump. Those stories are well written and acted, but they are just sort of inconsequential in the course of Squadrons’ events. I always enjoyed listening to them, but it’s unfortunate that you could skip every single one and it wouldn’t affect your experience of the main story at all.

That story is an entertaining one though, centered around the New Republic’s development of a new type of warship and the Empire’s hunt to stop that weapon from joining the fight. It’s undoubtedly amusing the whole way through, but it doesn’t strike me as especially memorable. Neither side really makes much of a point about the greater conflict, you aren’t asked to make any choices or even really question anything they do, and your two rival squads never even directly clash like I so hoped they would – now that would have been fascinating. It just seems like a missed opportunity not to do something more interesting with this unique campaign format, where we have perspectives from both sides of the conflict.

That said, it does provide more than enough reason to hop into the cockpit and fly some very fun missions. Most objectives do boil down to “you’re in space and you need to shoot X thing,” (which is the entire premise) but the story’s setup for each one makes them feel more diverse than that – especially when you’re hopping between good guy and bad guy every stage or two. One mission sees you hijacking a Star Destroyer, while another has you weaving in and out of ship debris while using old power cores as a triggerable mine field. The dogfighting itself is so good that it never got dull, even if I did occasionally wish there was a bit more objective variety here – for example, it would have been cool to see more scenarios centered around piloting through tight spaces or maybe set closer to the surface of a planet (or moon-sized space station, though the galaxy is short on those in this time period).

Thankfully, the places you do go always show off how incredibly gorgeous Squadrons is. Even if objectives start to feel similar, weaving through cloudy nebulas or around shattered moons differentiates them in stunning fashion. Missions are action-packed, but most smartly start slow and give you a chance to take in some of the grandiose sights they have to offer before the turbolasers start flying. That spectacle is present in cutscenes as well, which frequently upstage those optional hangar conversations and make them feel like an afterthought by comparison.

Climbing Into the Cockpit

Those decadent sights and sounds extend into the cockpits too, with each of the eight ships (four for each side) sporting a completely custom and impressively detailed interior. The UI is even built directly into the actual console of the ship, meaning you have to get comfortable reading each new interior when you first use them. I promise that’s more fun than it sounds though, thanks to the intuitive visual language that’s established for things like radar, power distribution, and throttle control. All that detail rocks, and goes a long way toward making each ship feel distinct – for example, the Imperial Support ship, the TIE Reaper, has you sitting on the left of a cockpit designed for two, initially causing me to have some minor collisions with things on my right as I got used to the fact that my view wasn’t centered.

And while the four ship classes – Fighter, Interceptor, Bomber, and Support – are shared between the Empire and New Republic, each faction has its own twists that go beyond cosmetics. The biggest is that the TIE Fighter, Interceptor, and Bomber have no regenerating shields whatsoever but generally make up for it with more hull strength and agility than the shielded New Republic fleet. Each ship also has different weapon, hull, shield, and engine options to further differentiate them, though what you can or can’t pick is up to whatever mission you are on at the time.

There’s no progression or actual unlocks throughout the campaign – that’s left to the multiplayer – but it was still nice to have the reins slowly loosen as more options were introduced for me to choose from. Tweaking your loadout can have a drastic impact on the performance of your ship, and the normal difficulty allows for plenty of room for experimentation without being pushover easy. That means there’s not much in the way of replayability here beyond trying higher difficulties or different loadouts for your own amusement, but each mission does also have some basic achievement-style objectives to stretch for – there’s always one for not dying during a mission, one for completion time, and two for special mid-mission side objectives that can bring a neat bit of added challenge (though not a whole lot of it).

To Infinity and Beyond

Squadrons also has full VR support on PC and PS4, as well has full HOTAS (flight stick and throttle) support on all platforms, which is extremely impressive. I used an Oculus Quest with a link cable on PC, and apart from having to awkwardly watch cutscenes in 2D (which I imagine is partly why the hangar conversations are setup the way they are) it’s just a phenomenal way to play. You can take in every inch of its detailed ship interiors, track enemies with your head, and more easily marvel at the lovely space around you. The fact that you can play this entire game in VR is just incredible, easily earning it a place as one of the best VR games available.

Add a HOTAS into the mix and it gets even more impressive, and I almost never want to go back to a controller. It sounds cliche, but the immersion of slamming the throttle and twisting the stick to weave in and out of Star Destroyer debris is exhilarating. I’ve had a chance to try three common flight stick options out on PC with various effectiveness: The Logitech Extreme 3D Pro, the ThrustMaster T.Flight HOTAS 4, and the Hori HOTAS Flight Stick (the latter two of which were provided to us by the manufacturers for this review). Regardless of your choice, you will probably have to fiddle with remapping controls a bit, but Squadrons makes that pretty painless to do.

Star Wars: Squadrons in VR with a HOTAS is just a phenomenal way to play.

Using the T.Flight was just incredible for this, with more than enough buttons to comfortably map everything important – Squadrons doesn’t have nearly as many inputs to manage as a sim like Elite: Dangerous – and compatibility on PS4 and Xbox One as well, depending on the model. I also loved that the throttle notches into place in the center position, which is important in Squadrons to let you turn tighter faster. The Extreme 3D Pro was a similarly solid option, though its small throttle and button layout does make it a little awkward to use. The Hori HOTAS, on the other hand, doesn’t feel suited for Squadrons at all. It doesn’t have that crucial stick twist you need in space flight, and too many of its inputs are mapped to double button presses seemingly designed with only Ace Combat 7 in mind (which it sort of was). To be fair, this is a stick primarily meant for PS4, and it even only showed up as a gamepad on my PC, so I’ll need to give it a shot on PS4 post-launch too.

And for those who really want to get into the nitty gritty of their Star Wars sim dreams, you can extensively customize what UI elements do or don’t show up, tuning exactly how much you want to rely on your own eyes and the readouts of your dashboard. It’s the added touches like this – alongside a host of wider accessibility options – that make Squadrons feel like far more than the quick and dirty Star Wars-themed dogfighter it so easily could have been.