Steam user reviews can be bought for $5 - Report

We've all heard the occasional story about a company being caught for submitting its own positive user reviews on various consumer or retail websites. What's perhaps more distressing, however, is just how simple it is for a company to potentially pay a very small amount to receive a positive game review on Steam. An interesting report from PCGamesN has revealed that there are numerous sellers on odd jobs website Fiverr that plainly state, "I will play and review your game on Steam."

PCGamesN took the bait and created an account in order to contact every seller offering a paid-for Steam review. The publication did make sure to offer a Steam code and say it's "a Steam game," not "my Steam game," but what's to stop someone in marketing for a games studio or publisher from sneakily taking advantage of a service like this? 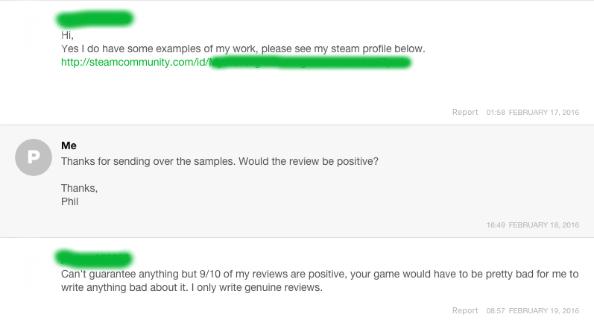 Publicly, none of the sellers on Fiverr explicitly says that the Steam review they will write will be positive, but PCGamesN writer Phil Iwaniuk bluntly asked 13 sellers if the review would be positive and only one person replied that a thumbs-up actually would not be guaranteed.

"I guarantee only that my review will be honest," the seller noted. "If you're looking for those kinds of fake reviews, there are plenty on Fiverr who provide such a service. However, I would suggest that you take great care because while in the short term such schemes may make your product look good, it usually ends up doing more harm in the long run."

Most of the other sellers replied without hesitation that their reviews would be positive. One person said, "It's unspoken, but yes."

The value of Steam user reviews of course is that other players are looking to fellow gamers for honest reviews from people who likely enjoy the same types of games as they do. It's an alternative to the professional review which some gamers may feel is tainted with bias. At this point, there's no evidence of game creators or publishers or PR actually buying Steam reviews, but the fact is that it doesn't seem like it would be difficult for them to do so. And other than making it clear in its guidelines, what can Valve really do to police the situation? We've contacted Valve for comment but have not heard back as of this writing.

The list of games that appear in the Fiverr seller's Steam review pages is below: