The Legend of Zelda: A Link to the Past Review (New 3DS

With A Link Between Worlds, 3D versions of the Nintendo 64 games and a number of other titles available via the Virtual Console and backwards compatibility, 3DS owners are not exactly short of main series Zelda games to play on their machine. For those with one of the New Nintendo 3DS models The Legend of Zelda: A Link to the Past can now be purchased too. Its memorable land would reappear in a Link Between Worlds, but here is a chance to revisit it in its original form – or for anyone who hasn't played it before to see what all the fuss is about. Frequently in or around the top spot of "Best Zelda" lists the game is, of course, a classic - but what is it like on the handheld?

Brilliant is the answer. That shouldn't be particularly surprising as the game previously went portable on the Game Boy Advance. Compared to that version, this release takes up a smaller percentage of the screen (having been designed with a less wide aspect ratio in mind), but the GBA edition cropped the action so here you get to enjoy a larger viewing area. With a bright pastel look and clean designs events are easy to follow as the game unfolds on the small screen, whether you are exploring a dungeon, traversing the desert or annoying chickens. 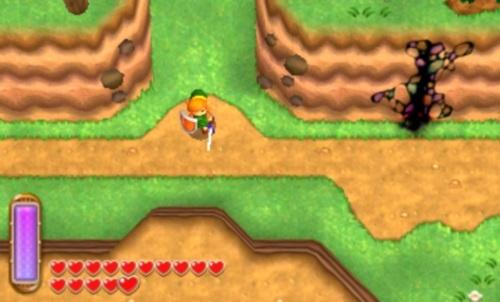 SNES games on New 3DS don't come with many added Virtual Console functions, but the original resolution mode has quickly established itself as something to switch on at the earliest opportunity. It may use even less of the available screen, but the crisp look of the squarer display is a wonderful option to have.

On the audio side of things there are a number of effective sound effects. The vocal additions to the GBA version are of course absent (which will please some) but a variety of slashes, thumps, clanks and bangs enhance the experience. There is also, of course, the adventurous and exciting soundtrack. Whether listening by yourself or unplugging your earphones in an attempt to get a room full of people to strut their funky stuff to the main theme, it's another example of a great SNES soundtrack.

The gameplay itself is as enjoyable as it has always been as you guide Link, Barry, Susan or whatever you've named the hero through the game. New weapons and upgraded abilities open up previously off-limit areas and it's a thrill to realise you can now visit areas previously left behind. Decent dungeon battles, some great boss encounters and action through both the Light and Dark Worlds provide plenty of enjoyment en route to the ending, and thanks to the presence of the suspension/restore point functions you can break up your journey through it however you like.

Finally, it should be noted that for Oceanic/European New 3DS owners, this is another SNES game that - having previously released on Wii and Wii U in its slower 50Hz edition - is now available on the handheld in its US 60Hz form. Hooray for correct speed gaming!

A decent looking and engrossing title with cracking music, this is a classic SNES game that is fun to replay many years later - and now you can play wherever you want. The screen may be smaller but nothing is lost with the move to the portable. Appearing on many a "greatest game" list (and not just the Zelda/Nintendo ones), A Link to the Past is a joy from start to finish and joins the growing list of recommended New 3DS downloads.