Tit for Tat and The Evolution of Cooperation by Robert Axelrod

On the Western Front of WWI, the French soldiers had a very simple rule for engaging with the Germans: fire two shots, but never fire first.

It was the French practice to “let sleeping dogs lie” when in a quiet sector and never be the first to attack, but to respond with two bullets for everyone that came over.This simple rule was very effective for preventing casualties and is an example of a strategy in game theory known as tit for tat that applies to a much broader problem: how do we get people to cooperate without a central authority.

A good example of the fundamental problem of cooperation is the case where two nations have erected trade barriers to each other’s exports.

Because of the mutual advantages of free trade, both countries would be better off if these barriers were eliminated. But, if either country were to eliminate its barriers first, it would find itself at a disadvantage. Whatever one country does, the other country is better off retaining its own trade barriers.

Therefore, each country has an incentive to retain trade barriers, leading to a worse outcome than would have been possible had both countries cooperated with each other.

There is a basic problem here that occurs in many areas: the pursuit of self-interest by each leads to a worse outcome for all.

The classic game theory model for this is the prisoner’s dilemma. It works like this:

Two members of a criminal gang are arrested and imprisoned.

Each prisoner is in solitary confinement with no way of talking with the other. The prosecutors lack sufficient evidence to convict the pair on the worst charge, but they have enough to convict both on a lesser charge.

Simultaneously, the prosecutors offer each prisoner a bargain. Each prisoner is given the opportunity either to defect and testify against the other or to cooperate with the other by remaining silent.

The possible outcomes are:

The best overall solution is for both prisoners to stay silent: that results in 2 years of total jail time, less than any of the other options.

However, from the point of view of each individual, it doesn’t quite look that way.

If you think that the other prisoner will stay silent, the best solution is to defect – that way you get off with nothing and they get three years. If you think the other play will defect, then it is also in your best interest to defect because that way you will only get two years as opposed to getting three and your partner going free.

It only makes sense to cooperate if you have some way of knowing they are also going to cooperate.

What makes it possible for cooperation to emerge is the knowledge between the players that they may meet again. They are not playing a single game, but an integrated one. This means that the choices today not only determine the outcome of this move but can influence the later choices of the players.

The key variable is the importance of the future moves relative to the current move.

In the case of an actual prisoners’ dilemma, you can think of the difference between two random criminals or someone that is part of the mob. The random criminal duo may be more likely to defect since they can plausibly say that they won’t ever meet again. In every mob movie, the mobsters stay silent. They know that they are better off doing the prison time because they will be accepted back as a loyal member when they get out. Defecting usually means a very unpleasant person shoots you in the back of the head – prison is much more preferable. ">1

In the case of a business deal, if you know that you can work with the other person for many years to come, it isn’t rational to try and take advantage of them to make more money month. The future value of the relationship is greater than whatever the amount you can take from them is.

So what is the optimal strategy in an iterated prisoners dilemma like a trade war or business partnership?

In the 1980s, a series of tournaments were set up where different experts designed algorithms to compete against each other in a series of iterated prisoner’s dilemma games.

The winner was the simplest strategy of all those submitted: “tit for tat.” 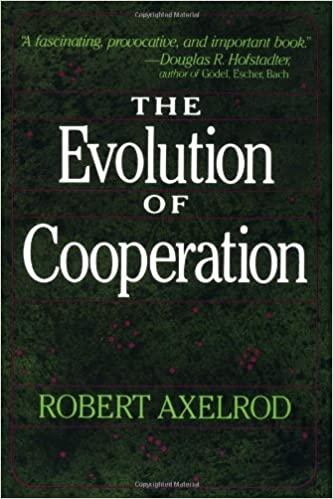 Tit for Tat combines four properties which, all together, make it successful:

Be Nice – avoid unnecessary conflict by cooperating as long as the other player does. Be Retaliatory – fight back in the face of an uncalled for defection by the other.Be Forgiving – forgive and go back to cooperating after retaliating to a provocation.Be Transparent– Be clear about your behavior so that the other player can adapt to your pattern of action.

This kind of all makes intuitive sense. The person you want to do business with or live next door to is the person who defaults to being friendly and cooperative but isn’t afraid to retaliate if someone isn’t playing nice.

In practice, there seem to be four common ways that people mess this up:

If someone views a game as a one-off prisoner’s dilemma, then defection is optimal. There is definitely a type of person that constantly engages in defection.

They always have some new hustle where they are trying to take advantage of someone and get out. There are many people that go through their whole life like this, but it’s not particularly ethical nor profitable.

Reading biographies of George Washington and Warren Buffet, one thing that stuck out to me was how much of their eventual success was the result of refusing to defect earlier in their lives.

Washington was a clear consensus pick as first president because everyone trusted him not to abuse his power since he had repeatedly passed up opportunities to defect in the past.

Companies were more likely to sell to Warren Buffett on better terms when they knew he had passed up opportunities to make billions of dollars by defecting. That sends a clear signal that “I value my reputation enough that I won’t screw you even for a billion dollars.”

When you are dealing with large acquisitions that have massive amounts of information asymmetry, you are ultimately relying to a large extent on the character and reputation of your counterparty to know that you aren’t getting screwed. Passing up billions of dollars to do the right thing is a pretty strong character statement.

On the other hand, some people err on the side of being too nice and not retaliating. These people don’t set up appropriate boundaries and send the message to others that it is ok to walk all over them.

While extracting more than one defection for each defection of the other risks escalation, extracting less than one-for-one risks exploitation.

3. Being Jealous or Overly Retaliatory

Another common error that showed up in the tournament was the belief that gains could be made from being relatively less forgiving than tit for tat. In a way, this makes some intuitive sense: by “sending a stronger message,” you will make sure that no one messes with you.

Expert strategists from political science, sociology, economics, psychology, and mathematics made the systematic errors of being too competitive for their own good, not being forgiving enough, and being too pessimistic about the responsiveness of the other side.

While tit for tat was the most overall successful strategy, the single property which distinguished the relatively high-scoring entries from the relatively low-scoring was being nice, which is to say never being the first to defect.

This frequently shows up in everyday life as jealousy. In one competition, there was a leaderboard where students looked to see if they were doing well or poorly.

Sooner or later, one student defected to get ahead. Then the other defected so as not to get behind. Then the situation is likely to deteriorate with mutual recriminations.

This is a frequent pattern in society and a classic archetype of conflict. Think Hatfield and McCoys of Applachian fame or the Capulets and Montagues in Shakespeare’s Romeo and Juliet. The two sides don’t even remember what they started fighting about in the first place but keep retaliating more strongly and escalating the conflict.

One should be retaliatory and establish boundaries, but in an appropriate and equal way, not to “show them who is boss” or “catch up.”

The final way people mess up is they get too clever: they employ a strategy that is so complex that it cannot be understood by the other players. Too much complexity can appear to be total chaos to the outside observer.

If you are using a strategy that appears random, then the other player won’t know what to expect from your behavior.

One way to account for tit for tat’s great success in the tournament is that it has great clarity. When you are using tit for tat, the other player has an excellent chance of understanding what you are doing. Your future behavior can then be predicted. Once this happens, the other player can easily see that the best way to deal with tit for tat is to cooperate with it.

Tit for tat’s robust success is its combination of those core four core strategies:

Be Nice – niceness prevents it from getting into unnecessary trouble.Be Retaliatory –retaliation discourages the other side from persisting whenever defection is tried.Be Forgiving – forgiveness helps restore mutual cooperation.Be Transparent– clarity makes it intelligible to the other player, thereby eliciting long-term cooperation.

The French soldiers’ policy of “fire two shots but never fire first” captured all these. It was nice in that they never fired first, retaliatory because they responded aggressively, forgiving because they stopped firing after two shots and pretty obvious to the enemy what they were doing.

So here are the five simple suggestions for individual conduct:

Play longterm games with long term people.Do not be envious of other people’s success.Do not be the first to defect.Reciprocate both cooperation and defection.Do not try to be too clever.Footnotes It’s kind of like playing a game of chicken where two cars drive at each other and whoever swerves first is the chicken. The optimal strategy is to put a brick on the accelerator and make a very visible show of throwing the steering wheel out the window. If the opponent knows you can’t turn, they are forced to do it themselves.