When I got a Nintendo Switch a couple years ago, one of the first games I bought was The Legend of Zelda: Breath of the Wild. As a longtime fan of the Zelda franchise (I’ve been playing the series off and on since Super Nintendo’s The Legend of Zelda: A Link to the Past), I’d heard nothing but raves about the series’ first foray into open world gaming. Rather than the tightly structured adventures of Link’s past where you have a little flexibility in which order to address dungeons, but ultimately must collect certain items to proceed, Breath of the Wild did not remotely hold the player’s hand. After you clear the Great Plateau prologue, the world is open to you in an almost daunting fashion. While there are main story objectives to reach, the guiding ethos is “If you can see it, you can get there.”

When it comes to the ways I relax and unwind, I prefer structure. I like being able to check boxes, gain a sense of simple completion, and feel like I’m making progress even if it’s an artificial sense of accomplishment. And I totally understand that’s not for everyone. But on my first go-through with Breath of the Wild, I tried playing the game without any guidance, and I did not have a good time. Shrines were irritating (I must have spent an hour on the Myahm Agana shrine where you’re trying to use the motion controls to get a ball through a maze), and after reaching Kakariko Village, I was at a loss on where to go next beyond a vague sense of trying to make my way through Lanayru while getting pummeled by no shortage of enemies. I had read tips and tricks on playing the game, but nothing that made Breath of the Wild a fun experience.

Related: ‘The Legend of Zelda’: Here’s Why Nintendo Pulled the Plug on a Live-Action Series

So I put the game away for about two years and went onto other games. But it still lingered on my Switch, and I couldn’t ignore all the acclaim it had received or my love for the series. The solution to my problem with the game was the hardcover Complete Official Guide (it retailed for $26 when I bought it, but I guess it’s now out of print, so the cost has ballooned to almost $100). Then at the start of this year, I sat down with the guide, which offered a walkthrough along with all sorts of detailed depictions on how to beat the game and shrines, and methodically made my way through the game. I had a much better time with it.

For some, this process may be anathema. After all, if you’re using a guide, aren’t you defeating the purpose of the game? Where’s the sense of discovery? Where’s the challenge and the difficulty if you’re simply following the instructions? But for me, the gaming experience is one where I like to unwind. I tried Breath of the Wild the way it was intended, and I did not enjoy myself. Any sense of discovery was overshadowed by frustration and anger at my impeded progress. Playing the game started to feel like work, and while I could have thrown up my hands and said, “Well, I guess this isn’t for me,” I didn’t want to toss aside the lush, vibrant world the developers had created.

The guide represented a nice compromise. I could take on a shrine by myself, try to puzzle it out, and if after some time I couldn’t quite crack it, I could open up my guide for the solution. Instead of wandering aimlessly into regions unprepared, I could outfit Link with the right materials so that I wasn’t constantly relying on elixirs and foods to deal with the temperature. For example, it wasn’t until the guide that I found out you could get a warm doublet on the Great Plateau rather than relying on spicy peppers. I felt like I was in control and making progress rather than fighting against the game only so I could eek out a small bit of satisfaction before trying to figure out what the hell to do next. 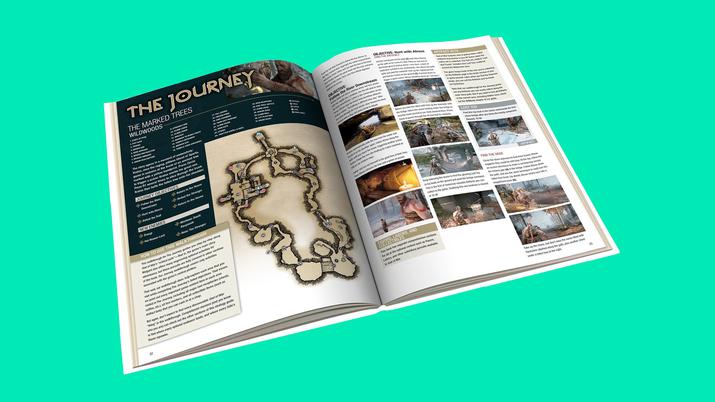 If you played Breath of the Wild the “right” way, then more power to you. I’m glad you enjoyed your open world experience. But when it comes to any game, we should be willing to embrace when there’s more than one way to enjoy the experience. It may not be “hardcore” to play a game with a strategy guide, but short of getting a job in e-sports, in my experience no one is all that impressed if you’re good at a video game. What matters more is if you enjoy the experience. For some people, that involves cranking the difficulty and fighting tooth-and-nail for every inch of progress. But I am not one of those people. After a day of work, I do not want more work, so I’m more than happy for a book (and yes, I prefer a book I can put on my shelf rather than an online guide, although physical copies are pretty much deceased with so many online guides as well as patches that change the experience) to point me in the right direction and hold my hand. Letting me get the sense of accomplishment without trying my patience is an enjoyable experience for me, and so on my second attempt at Breath of the Wild, I had a much better time and could appreciate the world-building and detail that when into the game (also, this has nothing to do with the guide, but if you do play Breath of the Wild, I recommend playing it on a TV rather than handheld as the Switch’s screen doesn’t do justice to the vibrant environments).

There shouldn’t be any shame in your game. If you bought it, you deserve to play a game in a way that gives you the most satisfaction, not what cements your bona fides among a subset a gamers who demand toil in place of joy. If you like playing a game for overcoming challenges, that’s great. But if you want to play a game where you want the reward of steady progress, there’s nothing wrong with a strategy guide.

Cavill discusses Geralt being Ciri's new guardian, the arrival of Vesemir, and more.

About The AuthorMatt Goldberg(15065 Articles Published)

Matt Goldberg has been an editor with Collider since 2007. As the site's Chief Film Critic, he has authored hundreds of reviews and covered major film festivals including the Toronto International Film Festival and the Sundance Film Festival. He resides in Atlanta with his wife and their dog Jack.