There's nothing I love more than rifling through a corpse's pockets. Shooting and looting is so common in videogames that I've spent many hours of my finite life checking over dead guys for ammo, cash, or sometimes a sparkly gem or magic potion. The thrill of discovery combined with the rush of grave-robbing? It's the best.

Searching corpses in World War Z, a zombie shooter based on that one Brad Pitt movie from 2013, is never fun. Instead, it's a recurring scavenger hunt where the key to a locked door is on the corpse of an employee or security guard. During one of these key hunts, my co-op teammates and I seek out the six Very Special Corpses who aren't up and running around, and then press E on their bodies. These hunts play out the same way every time: the last body I searched had the key. I did this routine at least once in each of World War Z's four campaign chapters.

I have many complaints about World War Z, a four-player co-op shooter similar to Valve's classic Left 4 Dead. This might be the pettiest, but it encapsulates a lot of what's wrong with the game: its repetitive level design, thoughtless obstacles, and tendency to take any good idea and jump on it until it's dead.

It's weird to get a videogame based off a movie five years after the fact. Still, it's even weirder that World War Z takes inspiration from the 2013 movie when Max Brooks's best selling 2006 novel is just sitting right there, full of amazing stories of survival and human drama. The only nod to the book is the "Lobo," a special shovel-based melee weapon invented by Marines that becomes standard-issue in the rebuilt American Army. In World War Z, the Lobo is DLC for players who pre-ordered the special edition. 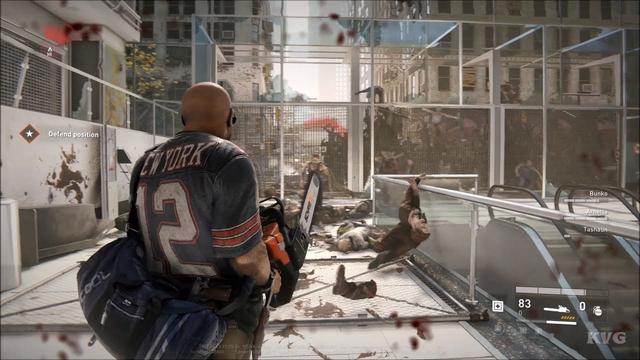 World War Z's campaign spans the world, following different sets of four characters trying to survive in the United States, Israel, Russia, and Japan. I liked getting to hop around the world to different campaigns. Switching things up between sparse desert and frozen Russian streets makes the story feel bigger and more universal. Unfortunately, I found that switching to new characters every few levels made the survivors forgettable. Hopping from a New York City fireman to a Russian Orthodox priest makes for an interesting cultural leap, but I couldn't tell you any of their names.

World War Z plays like Left 4 Dead or Vermintide or Overkill's Walking Dead. I joined three other players in walking, shooting, and scavenging for ammo and health. We opened gates and tried not to get pounced, poisoned, or snatched by powerful special enemies. Teamwork is key: even if I'm the best marksman in the world, I still need a friendly hand to pick me up when I'm injured.

Unlike all those other games I mentioned, World War Z does have different player classes along with different characters; they're interchangeable. I can play as a medic or melee-focused "slasher" whether I'm playing as Bunko Tatsumi the Hello Kitty–toting teenager or as Angel Flores the, um… New York… guy? (He's wearing a New York Giants jersey, and that's everything I know about him.) This is a departure from Left 4 Dead, where the characters play the same, and from Vermintide, where character and play style are the same.

I had the most fun with the Fixer class, which can help out the team by dropping ammo bags. I loved helping my team get ready for a big fight by making sure everyone loaded up on extra-powerful explosive rounds. Leveling up a class gave me access to some interesting perks. For the Fixer, one of the higher levels let me come back to life if everyone else on my team became incapacitated. Getting one last chance to heroically pick up another teammate and save a doomed mission was great.

There is exactly one thing that World War Z borrowed from the movie that works: huge zombie hoards. There's a part in the movie where CGI zombies climb over each other to hop the huge concrete walls surrounding Jerusalem. During massive hoard fight events in World War Z, zombies that get stopped by fences or walls pile up, then climb each other and surge over them. I loved watching out for these piles in the chaos of a swarm. Shooting into the base of the pile makes it collapse like a junior varsity cheerleading squad failing to hold a human pyramid—both satisfying and slapstick hilarious.

And, well, that's pretty much it. I finished the entire campaign in a few hours, then I completed it again a couple of times to unlock better guns and more skills for the different classes. There's also a multiplayer "PvPvZ" mode that feels like such a bolted-on afterthought that it doesn't deserve more than this mention.

World War Z is bland and forgettable, but it's enjoyable in parts, not just plain bad. I played Overkill's The Walking Dead last year, and that game was a mess. Instead, World War Z is mostly competent but it fails in little things, important design choices that similar games handled in much better ways.

Here's a good example: the Gasbag. Just like Left 4 Dead's Boomer and Vermintide's Globadier, the Gasbag is one of World War Z's especially dangerous zombie types. The Gasbag is a zombie—a medical worker or emergency responder, I guess—who died and decomposed while sealed up in a hazmat suit. As anyone who has ever found year-old leftovers in the fridge can confirm: you do not want to be near that thing when the seal gets cracked open and the horrible stench inside is released.

What's cool about the Gasbag is that killing it with a headshot kills it without spraying the gas cloud. It doesn't make any sense that a headshot keeps all the stink inside, but that's not important. Pulling off a skillful headshot in the middle of chaos is a fun way to defuse a dangerous enemy.

The trouble is, it almost never comes up. At close range, the bright-yellow hazmat suit makes a headshot easy; at long range, the Gasbag isn't dangerous. When I think of the Boomer, I remember a specific sound, a splatter, blindness, and the fear of being helpless. The Boomer lives in my mind as a jump-scare. When I think of the Gasbag now, I think of a harmless puff of green gas in the distance. It's a waste of a cool idea.

In all things, World War Z takes ideas that I've already seen done better elsewhere, gives them an interesting little twist—and then makes that twist not matter. It treads familiar ground, but it's not as clever or fun as what's come before it.