A Chicago mother allegedly shot and killed her 12-year-old son as she raged about losing a memory card on Saturday.

Fallon Harris, 37, shot her son, Kaden Ingram, twice in the head mid-morning on Saturday, after the boy told her he did not know where the memory card was, according to Cook County State Attorney Eugene Wood.

The incident allegedly unfolded on a home security system at their south Chicago home.

A family member called the police after finding Kaden lying in their kitchen with multiple bullet wounds to his head, unresponsive.

He was brought to the University of Chicago Medical Center, where he was pronounced dead. He is now one of the 60 shooting victims in the city over the weekend.

Harris is now being charged with first-degree murder, and is being held without bail as she waits for a mental health evaluation.

Her family members say she has faced mental health issues over the past few months, and prosecutors claim she was ‘paranoid’ at a preliminary hearing on Sunday.

© Provided by Daily Mail Fallon Harris, 37, was charged over the weekend with first-degree murder

© Provided by Daily Mail She is accused of fatally shooting her 12-year-old son, Kaden Ingram

At the hearing, Wood alleged that the incident began at around 10.15am on Saturday, when Harris confronted her son about the whereabouts of a digital memory card she had taken out of her car.

It is unclear what was on the memory card.

When Kaden told his mother he did not know where the card was, Harris allegedly pointed a silver revolver at Kaden’s head and fired a non-fatal shot.

Audio evidence recovered from the home security system revealed that the first shot left Kaden ‘conscious and crying,’ Wood said, according to the Daily Beast.

While he was lying on the floor, Harris allegedly answered a phone call, before returning and once again demanding Kaden turn over the memory card. 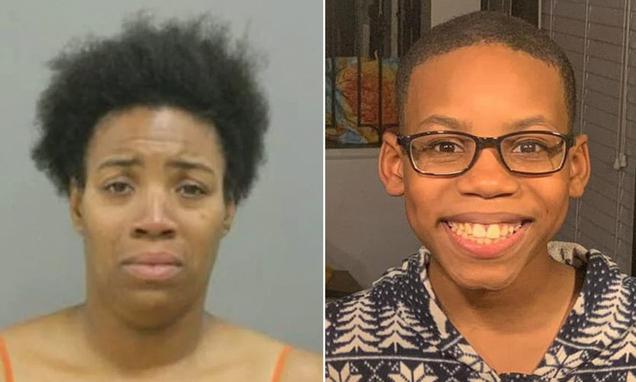 He once again told his mother he did not know where the memory card was, and Harris allegedly fired a second and fatal shot at his head – an incident Wood said was clearly caught on camera.

At that point, Harris allegedly called two family members and admitted that she shot her son over the missing memory card.

Those relatives then called the police and the boy’s father, who met officers at the crime scene.

When they arrived, Wood said Harris confessed to the shooting and showed them the weapon.

She had a concealed carry license and owned two guns, officials said.

Harris had been an employee of the Chicago Department of Transportation who had been displaying ‘paranoid behavior’ in the months before the fatal shooting, officials said on Sunday, and following her arrest, Wood said Harris broke down in tears and asked: ‘Can I talk to my momma?’

She was denied bail on Sunday, and Judge Mary Marubio signed a health care order allowing her to be evaluated.

Family members had reportedly been concerned about Harris’ mental health before, and encouraged her to meet with a therapist – which she did for the first time on Friday, according to the Chicago Sun-Times.

‘We didn’t know that this was going to transpire,’ said her estranged husband, Lavell Ingram, who is also Kaden’s father. ‘We had told her to get help. I guess it finally reached its boiling point.’

He said he remained close to Harris for the sake of their son.

‘She loved [Kaden] more than anything in the world,’ he said. ‘I don’t even think she understands what happened.’

‘I’m losing everything I had in this world. Everything.’

But he was just one of at least 60 people who were shot in 40 shooting incidents across the city between Friday evening and 11.59pm on Sunday, the Chicago Police Department announced on Monday.

The weekend prior, six people were killed and at least 61 others were wounded in shootings, ABC 7 Chicago reports.

Citywide, shooting incidents are up 9 percent from the same time last year, Chicago Police Department data shows, and murders are up 4 percent.