Facebook Suggested For You Posts In The Feed Are Annoying

For the past several months, and probably longer, something is really irritating me on Facebook. No it’s not ads, it’s actually worse than ads. It’s the suggested for you posts in the news feed.

Can you turn them off? I’ve taken a look around at some possible solutions.

First of all I like Facebook for what it’s supposed to be for. Connecting with friends, brands, and groups with like minded people. It’s all great. Yes, someone has to pay the bills, so we have ads, I accept that.

But over the past several months, or even a year or so I’ve begun to notice more and more that I’m forced to see posts which are labelled “Suggested for you”.

The vast majority of these posts are things I have no interest in, and are from pages that I’m not following.

It’s important to note that these aren’t sponsored posts, they’re not ads, they’re not paid for. It’s the Facebook Algo suggesting to me (and you) it thinks you’re interested in this content.

I don’t think it’s a coincidence that most of the suggested for you posts are videos…Videos take a while to watch in comparison to an image, and are easier to watch than reading walls of text.

It’s easy to get lost in a video and before you know it, 10 minutes has gone by. And another 10 minutes, and another. It all adds up to wasted time.

I’ve seen DIY and How To Videos, videos which are designed to be viral right from the outset. These things are completely irrelevant to me.

They look cool, and you have to watch to see the end or what happens next. They’re very cleverly done, and Facebook are leveraging them no matter if you like them or not and putting them in the feed.

I was suggested this video, I don’t follow this page and it has nothing to do with anything I am interested in.

Can You Hack The Suggested Posts Algorithm?

Facebook wants to show you what they think you want via an algorithm. My theory was that if I hid enough of these suggested posts, I would stop seeing them. Or at the very least, stop seeing the same category/genre, or even from the same page. 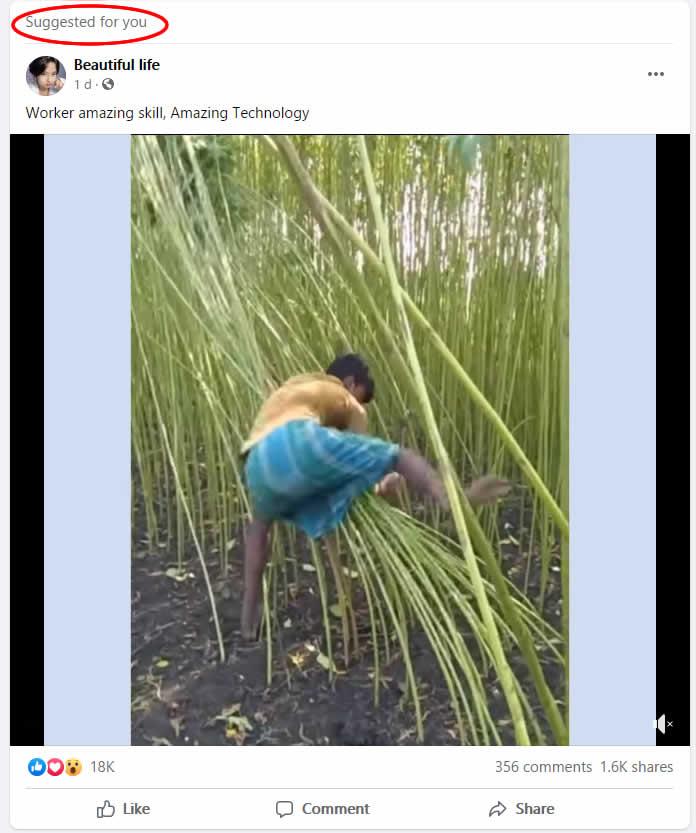 For the past several months I have been testing this. Almost every single time I see a suggested post I hide it. I never watch a video.

I am trying to train their algorithm so it knows I’m not interested in that content, so it should not show me similar things again.

After several months, my experiment did not work.

This differs from Twitter. I’ve wrote how Twitter is toxic and it can eat up so much of your time without you even realising it. One of the things I hated was being shown posts that my followers ‘liked’ in my timeline.

I was able to ‘hack’ this. I discovered that if you hid enough of these likes, you’d stop getting them from ALL accounts in your feed. After a month or so they’d appear again, and then it’s a case of hiding several again, and I stopped getting them again.

So now you’ll want to know how you can stop suggested for you posts in your feed on Facebook. Unfortunately It doesn’t look like you can. There are extensions you can get for your browsers if you use Chrome such as UBlockOrigin and a quick Google search shows you can add a filter to block these annoyances.

But I have tried this, and it did not seem to work. It would appear it’s kind of a game of whack-a-mole, where people are trying to block things on Facebook and Facebook are changing code which stops people doing it.

How To Put Facebook Feed Back In Chronological Order

The only walk around for this I have found is to put Facebook posts in chronological order. Did you know you can actually do this? Probably not, it’s not a feature which has been shouted about a lot.

I have tested this and it seems to stop suggested for you posts in your feed, or at least I’ve stopped seeing them. The only downside is that you see absolutely everything posted, which can be a good or bad thing, depending on how many people and pages you’re following.

There is an option in the menu on the left, but if you don’t see it, this is the URL – https://www.facebook.com/?sk=h_chr

note the ?sk=h_chr after the domain.

It looks like we’re stuck with suggested for you posts in the feed on Facebook by default, unless of course they change it. It’s really terrible, and actually counter-productive. I see these annoying things between friends, groups and pages I follow, content I actually want to see.

Facebook is breaking that up with content I have no interest in, which takes me off the platform.