Monster Hunter World board game preview - one of the best

If you thought your prey in the Monster Hunter World board game would be easier to take down because of tabletop limitations, you're in for a shock. If anything, these creatures are just as brutal as they are in digital form. I had the chance to go hands-on with the project as it nears the launch of its Kickstarter campaign this April 20, and the result is ambitious in every sense of the world.

More importantly, the Monster Hunter World board game - revealed earlier this year - has the most appealing core loop of any video game adaptation I've played. Considering the fact that it's being developed by Steamforged Games (the folks behind the Ni No Kuni 2 board game, not to mention a Horizon Zero Dawn adaptation), that's saying something.

If you go down to the woods today

This game does exactly what it says on the tin: it's all about tracking, finding, and beating the snot out of monsters. Doing so earns you loot with which you can make new weapons or armor, allowing you to take on fiercer creatures. Craft new pants (or a snazzy hat, if you're feeling adventurous) and you'll be able to take on more powerful creatures for even better gear. Rinse and repeat for a good time.

From what I've seen, it's a moreish cycle with the fat trimmed away. Each game consists of three distinct sections: choosing the monster you want to chase, following it through the wilderness, and battling to the death. This is an easy concept to get on board with, and it's a good elevator pitch if you're not familiar with Monster Hunter World itself - the idea translates well to tabletop. Plus, those with itchy feet and anyone that's short on time can skip ahead to the fight if they'd prefer.

There is (literally) a lot to unpack here (Image credit: Steamforged Games) 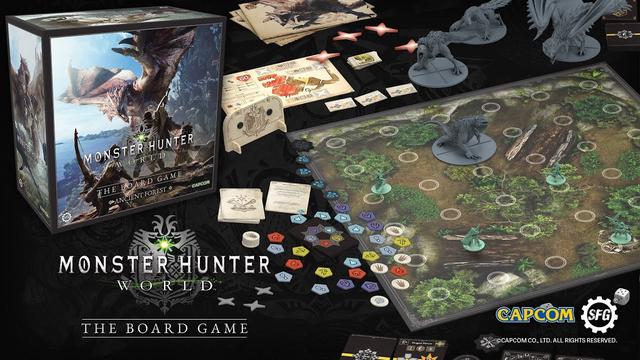 However, be warned - doing so skips some of the best bits about the Monster Hunter World board game. After choosing which creature you're hoping to smack about (four monsters are included in each core set, and you can mix and match between them or the numerous expansions at will), you'll embark on a multi-step quest that's reminiscent of the old Fighting Fantasy book series. To be precise, you'll go to a different text box based on your actions.

Although these passages were occasionally confusing during my preview (one section made it unclear whether our party was still lost in a cave we'd visited earlier), they add more agency to proceedings. Every hunt takes you in a different direction depending on what you choose to do, and you'll often have to choose between gathering useful resources or getting the jump on your foe. Because these decisions will impact the state in which you find the monster, it feels like a stripped-back version of a D&D session or another of the best tabletop RPGs.

Of course, that's not the real focus. Much like its inspiration or Monster Hunter Rise, the Monster Hunter World board game is at its best during battle. I wasn't sure if it'd be able to match the digital version's fluidity and speed ahead of my hands-on, but now I'm convinced. As you'd expect from creatures with this many teeth, claws, and assorted spiky bits, they're a real challenge. All of them have a unique ability that shakes up combat, and the Anjanath (a furry sort of T-Rex) my team faced was no different. Whenever it took more than three points of damage, it would turn and charge at the farthest player.

While this made hiding in a bush at the back of the board rather inadvisable, it also offered tactical opportunities that make it a contender for our best cooperative board games list. Namely, our party was able to herd the creature where we needed it to go so we could take advantage of our characters' strengths. Just like the video game series, it allows you to position yourself so you can target certain body parts as well. Damage them enough and they'll break, removing attacks from the monster's arsenal and guaranteeing certain items once it's defeated.

As such, you can plan ahead depending on what kit you need for upgrades. That's where Monster Hunter World: The Board Game's long-term appeal comes in. Every character has their own progression tree and chasing down items to make improved gear is just as satisfying as it is on consoles. Because those weapons and armor pieces carry over to the next session, there's a tangible sense of progress, ownership, and progression. In fact, it's a little reminiscent of Gloomhaven or Legacy versions of the Pandemic board game as a result. That's no bad thing, as both are amongst the best board games for a reason.

When combined with the game's attack mechanics (generated by a shuffled deck of cards), no encounter is the same. It's not always clear what your target will do next, which helps in terms of replayability. I was initially worried after hearing that the two starter packs - The Ancient Forest and Wildspire Waste - only feature four monsters in total, but this soothes those concerns. Especially because each monster comes with stat-variations and different difficulty levels.

In addition, you'll start to recognise what might be coming (and from where) based on symbols at the back of the attack card. This opens up a deeper, more rewarding experience as you learn.

That's true of the Monster Hunter World board game as a whole, to be honest. There's so much else we didn't get to explore in full - ranging from Palico helpers to impressively detailed miniatures - and our preview felt as if we were barely scratching the surface. One thing was clear, though: the franchise's transition to the tabletop hasn't dulled its edge. Indeed, its monsters are just as deadly as they ever were.

Monster Hunter World: The Board Game arrives on Kickstarter this April 20, 2021, and the campaign runs until April 30. To keep you busy until then, be sure to check out the top board games for 2 players.