When White Sox outfielder Adam Engel was playing for Single-A Kannapolis in 2014, Jim Thome came to visit, and Engel sought his advice on how the Hall of Famer handled high-stress moments in his career.

Thome told him he used to step out of the box and try to yawn. The act, he said, served two purposes: one, to let the pitcher think that, despite the significance of the moment, Thome was suffering from such ennui that he needed to yawn; and two, to give him a moment to slow his heart rate down and take deep breaths. The latter was the more important of the two, of course, but the former didn’t hurt either.

Baseball is unique in that players work together but in a series of one-on-one challenges of pitcher vs. batter. Unlike the other major sports, which flow with the synchronous momentum of groups of players working together at the same time, each man has to take his turn in the box. To be successful in this sport, players have to prepare themselves mentally as much as physically, and an emphasis on the mental preparation is fully taking hold across MLB.

Though players have dealt with high-stress situations for years, how they do it has changed.

“There are so many things that happen during the course of a game or season that have an adverse component to them,” Dr. Jeffrey Fishbein, sport psychologist to the White Sox, told Sporting News. “You play the game to the best of your ability, but at some point you have to choose how you’re going to react to a variety of situations.”

Fishbein is one of many in his field, one that hardly existed in baseball a generation ago. Now, every team either employs or provides access to someone in this capacity.

Whether teams utilize sport psychologists or mental skills coaches — a title that can vary in meaning from team to team — or both, one of their biggest jobs is in working with players to prepare themselves mentally for the focus and resilience required for baseball, and for the high-stress moments that happen in every game.

Much of what baseball players do to relieve tension and maintain focus can go mostly unnoticed to fans. Most of the time, they look for a particular focal point, often something that’s constant and familiar, to help them stay relaxed and focused. Many batters will step out of the box and take a moment to look at a particular spot on their bat or adjust their batting gloves, for instance. For Engel, it’s something else.

“I try to pick something that’s going to be there all the time,” he said. “I like to look at my first foot and where I’m going to put it in the box. I try to dig in and make that the same.”

Part of managing those moments is that search for the constant. No matter the stadium, players know that certain things, such as the foul poles, will always be there. Losing themselves in the routine leads back to the familiar, the things that do not change no matter the moment. Focusing on a pebble in the dirt, repeating a mantra, even visualizing all allow for sharper focus and, hopefully, a good performance regardless of context.

Dr. Justin Anderson, a sport psychologist who works for Premier Sport Psychology, an independent firm based outside Minneapolis, said this sort of constant is more important than players realize.

“When we’re anxious, the eyes tend to bounce around a lot, and there’s research about getting the eyes settled and set on something,” Anderson said.

Wherever players look, the need is to settle the eyes and calm the nerves. The bat, the foul pole, or a spot in the dirt are common. But White Sox pitcher Carson Fulmer is different. Instead of looking at a particular object, he looks to the crowd in the stands. Not anyone in particular, he said, but the area in general, the blurred mass of faces.

“That lets me clear my mind and focus on the glove, and I’m ready to go and let my body take over,” Fulmer said. “It gives me an extra second to just breathe and center myself.”

Fulmer called looking to the crowd a change of scenery from zeroing in on home plate. But once he turns his eyes and locks in on the plate, it’s go time. From there, he said, his delivery is about letting go mentally and trusting the mechanics he has honed through repetition. 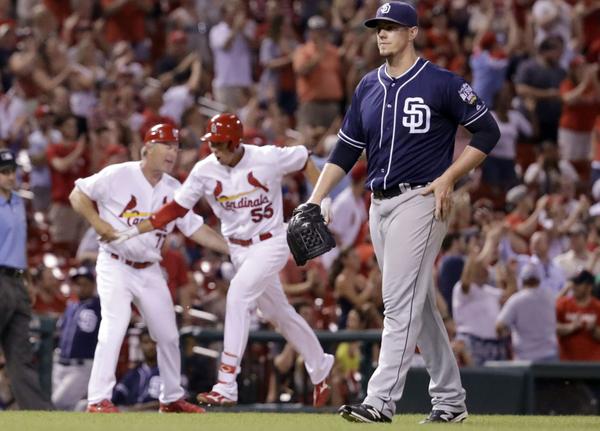 Along with finding a focal point of some sort, many players will repeat a mantra.

Tigers third baseman Jeimer Candelario said he will often pray in the batter’s box, saying “God, you play with me” to help himself focus and as a reminder to ignore the pressure of the situation.

“You have to control your emotions and control yourself,” Candelario said. “You just breathe and calm down.”

Candelario said he benefits from feeling like his teammates aren’t going to put a lot of pressure on him, but the simplicity of his description is a reflection of a lot of work before he takes the field. Before a hitter goes to the plate, he has put in the work to prepare himself for that moment. Even in what would seem an unimportant game or at-bat, there’s still pressure, so they have to prepare in advance.

This preparation, Anderson said, begins with assessing how much a player understands the way his mind works. They’re often introduced to this metacognition through things such as yoga or meditation, or even simple self-assessments of how they react to everyday scenarios.

“They could be out mowing the lawn and have some problem with the mower, and where does their mind go? And what’s their tactic or approach to that?” Anderson said.

In those moments, the mind has three directions it can go, and Anderson works to help players become mindful of whether they tend to drift to the past, to the future, or stay focused in the present. This can happen on the field or with a faulty lawnmower. The more players are able to understand where their mind tends to go — and why — the better they are at staying focused in a high-stress situation, Anderson said.

Many of them will use apps such as Headspace or Calm — both offer help with guided meditation, sleep, and focus — to bolster their work with sport psychologists and mental skills coaches. Players also have to learn to push failures out of their minds, even from at-bat to at-bat. This is best done through something Anderson calls the Triple-A Model.

The first step is being aware — where their mind is going and what they were thinking about during, say, a bad plate appearance. The next is acceptance — often the biggest struggle for younger players because it goes against their instinct to battle through struggle. The problem when they do this, Anderson said, is that they end up creating a new mental distraction.

“The intention is spot on, you want to let go of that thought. But what they’re essentially doing is they’re tying themselves in a knot,” he said. “And anytime we’re in a debate, we’re distracted.”

The last of the three steps is what Anderson calls the “and conjunction” — to focus on what’s coming next. To move on. The challenge from there is maintaining this focus within a game, when sometimes the pace allows too much opportunity for a player to get in his head.

“The thing with baseball is the pace of the game actually works against the human mind,” Anderson said. “In baseball, there is a lot of time to think, and a lot of time that you are in your own place.”

Hall of Fame broadcaster Vin Scully once said that baseball players have a lot of time to think and destroy themselves. That means their routine is important in every moment, especially when the pressure is on.

But routines can fall short in the unique high-stress situations that a baseball player faces, such as going to bat in Game 7 of the World Series with a runner on second and the game tied in extra innings.

In the 2016 World Series, Ben Zobrist was in that exact situation — one of the most pressure-filled moments in sports.

The key to staying locked in a spot like that, Zobrist said, is to actually lean in to the magnitude of the moment, not run from it.

“You can’t get out of the fact that you know it’s a big situation. You can’t deny reality,” he said. “The heart is racing, there’s a heightened sense of focus because of the gravity of the moment. You have to look at those things as good things.”

Rather than try to ignore these sensations, Zobrist said, it’s best to embrace them. That stress should lead to singularity of thought, he said, such as staying inside the upcoming pitch or protecting a certain part of the zone and letting go of everything else.

In his at-bat in the last inning of the 2016 World Series, Zobrist definitely embraced the moment, lining a two-strike pitch from Cleveland’s Bryan Shaw’sinto left field to score Albert Almora and give the Cubs a lead they wouldn’t relinquish.

“That stress is there for your own benefit,” Zobrist said. “And it’s not stress. It’s opportunity.”