JACKSONVILLE, Fla. -- Despite losing Drew Brees to retirement and their home stadium to Hurricane Ida for Week 1, the New Orleans Saints and Jameis Winston got off to a stunningly dominant start in Week 1.

Winston threw five touchdown passes in his starting debut with the Saints -- with zero turnovers -- as they routed the Green Bay Packers 38-3 in their makeshift "home" venue at TIAA Bank Field on Sunday. He capped his day with a 55-yard touchdown pass to wide receiver Deonte Harris in the fourth quarter, while New Orleans' defense was just as dominant with two interceptions of reigning MVP Aaron Rodgers.

"That was for the city," Winston said after the game, as he repeatedly redirected questions about how meaningful the performance was for him personally. "So, shoutout to the city of New Orleans. We did that for them. We knew how much it would mean to get a great victory for that region. They've been through so much [with damage and power outages from the hurricane]. And for us to be able to celebrate this victory with them, it's just hats off to them for their resilience, because they motivated us, they inspired us to come out there and ball."

Winston's performance was meaningful in its own right, however, considering it was his first NFL start since the Tampa Bay Buccaneers decided to replace him with Tom Brady during the 2020 offseason after Winston became the first player in league history to throw at least 30 touchdown passes and 30 interceptions in the same season.

Winston was remarkably effective for most of Sunday's contest, often settling for smart checkdowns or scrambling away from pressure -- as he ran four times for 38 yards and three first downs. He had just 93 passing yards before adding the 55-yard home run to Harris early in the fourth. Winston's ultimate total of 148 passing yards were the fewest in a five-touchdown game in NFL history, according to ESPN Stats & Information data.

Winston did have one interception in the second half that was nullified by a personal foul penalty.

"I thought he played very well. He was locked in, focused. We spread the ball around," Saints coach Sean Payton said.

"I didn't have any questions about him," Kamara said. "My impressions are what I've felt this whole camp. ... I'm impressed, I guess, but that's what I expect from him." 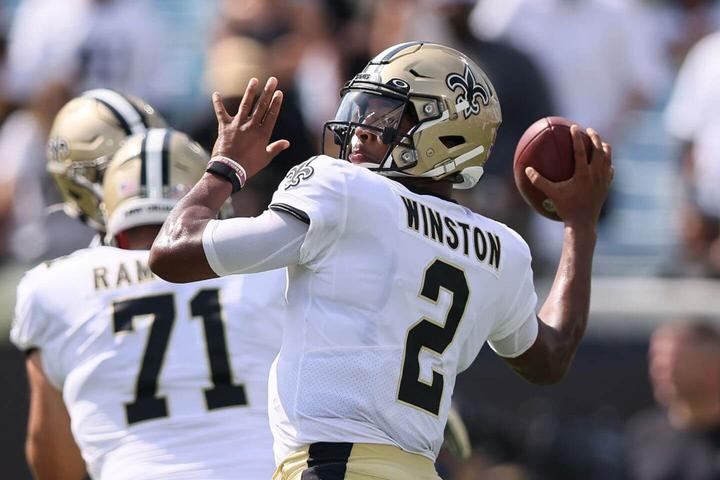 The Saints' commanding performance overall was certainly surprising, however, considering the level of their opponent and all of the adversity the team was dealing with leading up to this matchup.

Winston, 27, was actually one of 10 new starters for the Saints in Week 1 because of Brees' retirement, an offseason salary-cap purge, injuries and a suspension. The team also lost standout center Erik McCoy to an unspecified leg injury in the first quarter.

On top of that, the Saints spent the past two weeks training in the Dallas area after Hurricane Ida left most of the New Orleans area without power when it hit the Gulf Coast on Aug. 29.

Nevertheless, Winston and the Saints responded with one of the most efficient and superior performances of the entire Payton era. They possessed the ball for 21:51 in the first half, in what was the Saints' largest time of possession since 2000. And they became the first NFL team to put together back-to-back 15-play touchdown drives since 2000, according to ESPN Stats & Information research.

"Obviously, it was a really good win for us. All three units were really good. I was proud of how they played. I thought we were physical, and we played with a lot of energy," said Payton, who acknowledged that the hot weather was one of the reasons why the Saints chose Jacksonville as their alternate venue for Sunday's game, knowing that it would fit well with their belief that they could dominate the game at the line of scrimmage.

"Yeah, we felt like the hotter, the better. And that's no disrespect [to Green Bay]," said Payton, who added that a Northern team would choose cold weather under similar circumstances.

The other message that Payton preached to his players over the past two weeks -- and that several players repeated -- is that no one outside of their building would cut them any slack because of the adversity they were facing.

"Really, honestly, and I mean this with all due respect, no one really cares," Payton said. "We tried to do our best organizationally. And one of the game balls went out to all the people that are involved in the logistics; there's so much that goes into equipment and hotel planning and all of that. And the main goal is to create an environment where all the other distractions are removed and you can focus on football. And those people really did a good job the last two weeks."

Kamara took Payton's mindset one step further, saying he ignored all the offseason doubters who expected the Saints to suffer without Brees and injured wide receiver Michael Thomas, among other missing players.

"I'm the wrong person to ask, because I don't care [about doubters]," Kamara said. "We come in every season and our goals are the highest goals. So we're not looking at, 'Oh, this person is gone, so we might not be ... '

The Saints will return this week to Dallas, where they have been training at TCU's facilities. It's unclear when they will go home to New Orleans now that power is returning throughout the area. Their next home game is scheduled for Week 4 against the New York Giants.