Playing action video games may be bad for your brain, study

Playing first-person shooter video games causes some users to lose grey matter in a part of their brain associated with the memory of past events and experiences, a new study by two Montreal researchers concludes.

Gregory West, an associate professor of psychology at the Université de Montréal, says the neuroimaging study, published Tuesday in the journal Molecular Psychiatry, is the first to find conclusive evidence of grey matter loss in a key part of the brain as a direct result of computer interaction.

"A few studies have been published that show video games could have a positive impact on the brain, namely positive associations between action video games, first-person shooter games, and visual attention and motor control skills," West told CBC News.

"To date, no one has shown that human-computer interactions could have negative impacts on the brain — in this case the hippocampal memory system."

The four-year study by West and Véronique Bohbot, an associate professor of psychiatry at McGill University, looked at the impact of action video games on the hippocampus, the part of the brain that plays a critical role in spatial memory and the ability to recollect past events and experiences.

Researchers Gregory West and Véronique Bohbot say their study is the first to provide conclusive evidence that video games can have a negative impact on the brain.(submitted by Gregory West)

The neuroimaging study's participants were all healthy 18- to 30-year-olds with no history of playing video games.

Brain scans conducted on the participants before and after the experiment looked for differences in the hippocampus between players who favour spatial memory strategies and so-called response learners — that is, players whose way of navigating a game favours a part of the brain called the caudate nucleus, which helps us to form habits.

The study says 85 per cent of gamers who play six or more hours a week have been shown to rely more heavily on this brain structure to find their way in a game.

After 90 hours of playing first-person shooter games such as Call of Duty, Killzone, Medal of Honour and Borderlands 2, the brain scans of response learners showed what West said is "statistically significant" grey matter loss in the hippocampus.

"All people who we call response learners experienced a reduction in grey matter within the hippocampus," West said.

In a news release, the researchers expanded on their finding: "The problem is, the more they use the caudate nucleus, the less they use the hippocampus, and as a result the hippocampus loses cells and atrophies," adding that this could have "major implications" later in life.

This brain scan of a habitual video-game player shows the hippcampus to be smaller in a 'statistically significant manner,' according to West and Bohbot. (submitted by Gregory West)

The hippocampus is a well-understood biomarker for certain neuropsychiatric diseases, West explained.

"People with reduced grey matter in the hippocampus are more at risk for developing post-traumatic stress disorder and depression when they're younger and even Alzheimer's disease when they're older," he said.

West cautions, however, that more study is needed before concluding that playing action video games for long periods will ultimately cause these disorders, and more extensive, much longer-term research conducted over decades would be required to prove a link to Alzheimer's disease. 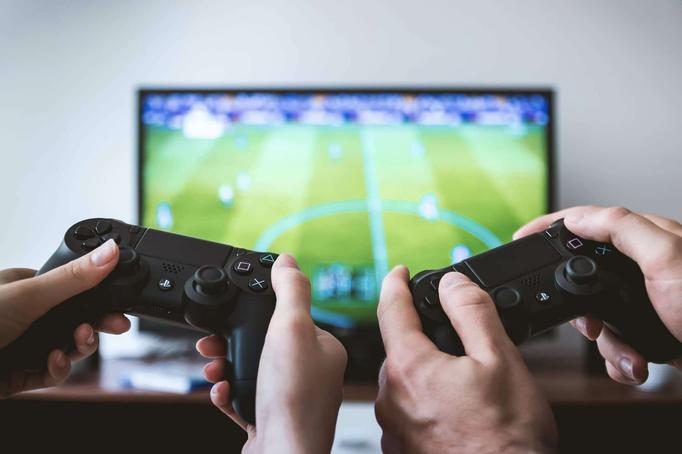 Prof. Andrew Przybylski of Oxford University is among the experimental psychologists who've cast doubt on these types of brain studies.

"Just because hippocampal size can be correlated with some things that we are worried about in other populations, does not mean there is actually some consistent, unlawful connection between hippocampus size and dementia," Przybylski said.

Przybylski says he recognizes the importance of technology in our lives. But if he was asked whether the research should be used to determine policy in the U.K., he say no. Nor would he use it to steer children to play one type of game versus another.

A key concern that arises from the findings is what they could mean for children and youth, West says.

First-person shooter games are usually rated for people aged 17 and up.However, minors do play such games, West said, and that raises concerns.

"Children still play them while their brain is still in development, and this could potentially bias them toward response [learning] strategies for the rest of their life," West said.

Relying on response learning means leaving in your brain in "autopilot" mode, West explained, instead of exercising the hippocampus by using your more conscious memory system.

The result could be less hippocampal grey matter — and greater risk to their mental health.

How the study was done

West and Bohbot first established if subjects were response learners or spatial learners by having them run a virtual maze on a computer.

Spatial learners were identified by their tendency to find their way via landmarks such as a rock, a tree or a mountain. Response learners, on the other hand, tend to navigate through remembered sequences of left and right turns.

The participants were then divided into two groups: one played first-person shooter games for a total of 90 hours, and for the same amount of time, the other control group played 3D-platform games, which require players to navigate in a virtual environment by remembering previously visited locations.

Playing Super Mario Odyssey and other 3D platform games could help restore some of the grey matter lost in the hippocampus from playing shooter video games, the Montreal researchers say.(Nintendo)

All participants playing 3D platform games, such as Super Mario 64, showed growth in the hippocampus after the experiment, regardless of whether they were response learners or spatial learners.

This result, West said, suggests that 3D platform games could be used as a kind of antidote to the negative effect of action games on hippocampal grey matter in response learners.

"It's certainly possible that someone could pick up a 3D platform game and train their brain to grow that grey matter back," he said.

West said their study raises essential questions about video-game design, and he and Bohbot are now hoping to address those questions together with video-game makers.

"If we understand that, we could potentially improve these types of games so that they don't cause any reduction in grey matter and eliminate any potential risks."

West pointed to the inclusion of GPS and way-finding markers in many current action games as examples of potentially problematic features.

"These type of markers, we hypothesize, encourage people to ignore landmarks and follow routes that recruit and rely on the brain's rewards system," he said.