Trump's Punt On Fake News Awards: In The End, He's Got Nothing

President Trump spent most of the last year railing on the country's tradition of a free press, going so far as to declare journalists enemies of the state. This language is commonly associated with despots and dictators, some of whom have adopted Trump's "fake news" language in their efforts to restrain the flow of information in their countries. But when time came to show his cards and detail the lies journalists have told, and the stories they have fabricated to destroy the president, he punted.

The whisper-thin document laughably entitled "The Highly Anticipated 2017 Fake News Awards" posits that "2017 was a year of unrelenting bias, unfair news coverage, and even downright fake news," adding that "studies have shown that over 90% of the media’s coverage of President Trump is negative."

Let's unpack that remarkable sentence a bit. First, "highly anticipated" is a stretch, but I'll allow it, and suggesting that negative media coverage equates with biased reporting is simply false. But claiming that 2017 was a year of "unrelenting bias and unfair news coverage" sets up readers to expect an indictment of the media--with the facts to back it up. And in that regard, the "Fake News Awards" slink into view like a homework assignment quickly scribbled on the bus ride to school. If the "winners" listed are the best examples of a free press intent on destroying democracy, we can all rest easy. 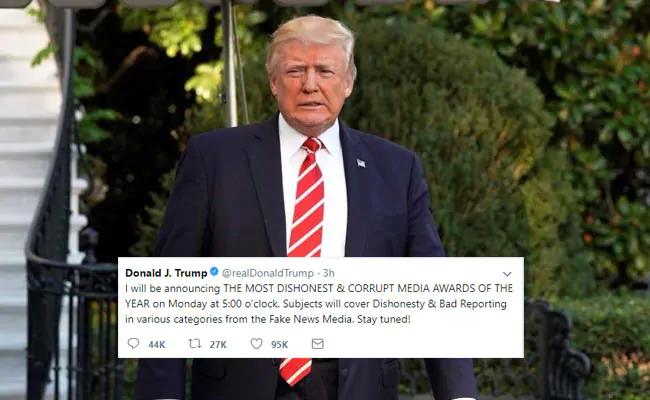 Take Fake News Award number eight: "Newsweek FALSELY reported that Polish First Lady Agata Kornhauser-Duda did not shake President Trump’s hand." If you are assembling the "highly anticipated" Fake News Awards, and someone suggests this as an example of reporting that, as Trump said in a tweet last July, "is distorting democracy," then you might want to sit down and think about why you don't have better examples of history-shifting bias than this ridiculous false report about a handshake.

Since 2016, Trump has accused CNN of being "fake news" in more than 30 tweets, and yet of the four stories selected for Fake News Awards, one is this truly shocking incident: "CNN FALSELY edited a video to make it appear President Trump defiantly overfed fish during a visit with the Japanese prime minister. Japanese prime minister actually led the way with the feeding." Guys. Please. Even if that were true, and you've offered no reason to believe it is, nobody cares--including the fish.

Had anyone responsible for choosing Fake News Award winners even bothered to go back and read each and every one of Trump's more than 170 tweets including the phrase "fake news," they would have found far better examples of stories to mention. In September, Trump called a CNN report a "total lie" for reporting that Chief of Staff John Kelly "was opposed to my stance on NFL players disrespecting FLAG, ANTHEM, COUNTRY. Total lie!" And five days later, Trump accused CNN and NBC of "going out of their way to disparage our great First Responders" in Puerto Rico "as a way to 'get Trump.'" Neither of these rise to the level of "enemy of the American people," but at least it's not handshakes and overfeeding fish.

And that's the thing with Donald Trump and his hatred of the media. It's not really about his love of country and his firm belief that biased reporters are deliberately manufacturing stories that are untrue in an effort to damage his presidency and weaken the nation. It's all about his bruised ego. It's small ball. Often, Trump accuses journalists of being "fake news" not for what they report, but for what he wishes they would report instead as if failing to serve as boosters for the president by relentlessly reporting on the performance of the stock market is proof of malpractice.

The president, who once loved nothing more than to recite his standing in pre-election polls, now condemns them as further evidence of bias, tweeting in April "the two fake news polls released yesterday, ABC and NBC, while containing some very positive info, were totally wrong in General E. Watch!" Fabricated polling would seem worthy of inclusion in any "highly anticipated" "Fake News Awards," but it's a nothing charge by a president whose feelings got hurt by the poll results. And the Fake News Awards are as empty and limp as Trump's charge that most "mainstream" media lies. Reporters make mistakes, but so far nobody has come forward with proof that any story was deliberately falsified, as both the president and his press secretary repeatedly claim.

This was the time to put up or shut up, and in the end, Trump revealed he's been bluffing all along. His all-caps shouting about bias and lies is nothing but bully pulpit bullying--and sadly, that's where his words are having an effect. By relentlessly repeating from lecterns adorned with the presidential seal that reporters are not honorable, not to be trusted, and actively working against the interests of America, Donald Trump is actively working to weaken one of the country's bedrocks of freedom.

All the rest is empty talk.