WASHINGTON - Playing violent video games like Doom, Wolfenstein 3D or Mortal Kombat can increase a person's aggressive thoughts, feelings and behavior both in laboratory settings and in actual life, according to two studies appearing in the April issue of the American Psychological Association's (APA) Journal of Personality and Social Psychology. Furthermore, violent video games may be more harmful than violent television and movies because they are interactive, very engrossing and require the player to identify with the aggressor, say the researchers.

"One study reveals that young men who are habitually aggressive may be especially vulnerable to the aggression-enhancing effects of repeated exposure to violent games," said psychologists Craig A. Anderson, Ph.D., and Karen E. Dill, Ph.D. "The other study reveals that even a brief exposure to violent video games can temporarily increase aggressive behavior in all types of participants."

The first study involved 227 college students who completed a measure of trait aggressiveness and reported their actual aggressive behaviors (delinquency) in the recent past. They also reported their video game playing habits. "We found that students who reported playing more violent video games in junior and high school engaged in more aggressive behavior," said lead author Anderson, of Iowa State University. "We also found that amount of time spent playing video games in the past was associated with lower academic grades in college." 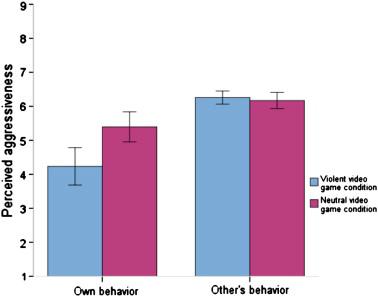 "Violent video games provide a forum for learning and practicing aggressive solutions to conflict situations," said Dr. Anderson. "In the short run, playing a violent video game appears to affect aggression by priming aggressive thoughts. Longer-term effects are likely to be longer lasting as well, as the player learns and practices new aggression-related scripts that can become more and more accessible for use when real-life conflict situations arise."

"One major concern is the active nature of the learning environment of the video game," say the authors. "This medium is potentially more dangerous than exposure to violent television and movies, which are known to have substantial effects on aggression and violence."

Article: "Video Games and Aggressive Thoughts, Feelings, and Behavior in the Laboratory and in Life," Craig A. Anderson, PhD, Iowa State University of Science and Technology and Karen E. Dill, PhD, Lenoir-Rhyne College, Journal of Personality and Social Psychology, Vol. 78, No. 4.

The American Psychological Association (APA), in Washington, DC, is the largest scientific and professional organization representing psychology in the United States and is the world's largest association of psychologists. APA's membership includes more than 159,000 researchers, educators, clinicians, consultants and students. Through its divisions in 53 subfields of psychology and affiliations with 59 state, territorial and Canadian provincial associations, APA works to advance psychology as a science, as a profession and as a means of promoting human welfare.