Hearts Card Game Strategy Before the Hand: What to Pass?

As you know, before every hand (except each fourth hand) of Hearts you have an option to pass along 3 cards. This is actually one of the most important phases, so we will cover some basics on what you should do.

Let’s start with a few general guidelines. Like in any other card game, it’s important to form a plan for your game once you get your cards. Since you have the option to pass cards along, you should form your plan at this point and decide on what you will pass. First thing you should do is look at your cards and decide whether you want to Shoot for the moon or just play a normal game. Secondly you should decide how you want to dump cards during the game. Lastly, you should decide on a plan for avoiding the Queen of Spades.

Now that that is out, let’s look at some specific things you should do…

…in a normal game

It seems pretty obvious that you should pass along high cards as to avoid taking tricks, but that’s not always the case. As I’ve mentioned previously, you should decide which suit you want to dump off quickly and use it to dump off Hearts and Ace, King and Queen of Spades later in the game.

If it’s possible to completely get rid of one suit, you should probably do it. The best suit to get rid of directly is Clubs, since it gives you the option to dump of a possible K or A of spades in the first trick. 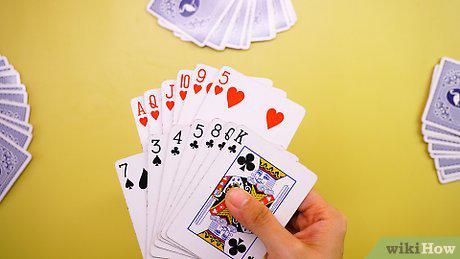 You should never pass along high cards of a suit, if you also have a lot of cards of that suit and a few of them are really low. You won’t get absolutely anything out of doing that. The chances are that you’ll be able to use up other players cards of that suit before you get to the high cards anyway.

Getting rid of high Hearts is a good idea, but never get rid of the low ones. They will protect you from taking the first few Hearts only tricks. Also, if you have a lot of them anyway, you should probably keep them, because you’ll be able to dump them off before you get to them.

Getting rid of Spades that are not Queen-or-higher is also a big mistake. If you do that, you might get stuck with a Queen-or-higher Spade card and you won’t have any control over taking or not taking the Queen of Spades. Low Spades protect you from that dreaded 13 point card.

When you pass along the Queen of Spades make sure you remember who you passed it on to. It will help you a lot during the game.

…when shooting for the moon

This is way easier than playing a normal game. You should only try it, if you have really good cards for it. The basic rule of thumb would be to keep as many high cards as you can and pass along the low ones, but there’s also some other things you should do:

Try to get as many cards of one suit as possible, so don’t throw away low cards of a suit that you also have the highest 3 cards of and a lot of cards in general. You’ll use this suit to pick up tricks once you take control of the game.Always keep a way to take the Queen of Spades.Try to keep or get at least one of the highest cards, K or A, of each suit. These cards will ensure that you are able to take control of the game and lead your dominant suit.The most important thing. If you do not have the highest Hearts and a lot of other Hearts, NEVER keep the low ones! If you do, you probably won’t be able to pick them up and you’ll fail at shooting the moon.

That’s it! I hope you’re a little wise, enjoy!