Hide and Seek is a horror game. You run from a pursuer, hurriedly choose a hiding spot, then just wait – with only breath and heartbeat in your ears – for a pair of legs to pass your slim field of view. They stop. You stop breathing. They pass. You start breathing. And then they’re back, you’re caught, the game is over. It’s a design that horror games have always favoured, but where most shock by using the moment of being found, Little Nightmares captures something more nuanced: that creeping fright of waiting to be caught.

If you were going to be dull about it, you’d describe Little Nightmares as a 2D stealth puzzle platformer. Guiding a tiny, raincoated character called Six from left to right through the sea-swaying innards of The Maw (an ocean facility with a slowly revealed, despicable purpose) is a matter of avoiding instant-death hazards and gentle puzzling about how to proceed – but it rarely feels as plainly mechanical as that. At around five hours long, Little Nightmares feels slightly too brief –- the implied sense of scale suggests there was surely more Maw to see than the route Six takes –- but that’s perhaps testament to how much fun Tarsier has with throwing ideas at us and leaving them aside once they’re done.

Little Nightmares’ closest relatives are Playdead’s exemplary Limbo and Inside, not just because of its faint glee at the idea of a child in mortal peril, but in how cleverly it braids together puzzle design and storytelling. Every enemy, every room, every meat grinder you use to make a rope of sausages to swing from, contributes to the story of The Maw and Six’s seeming breakout. It’s quietly masterful (not least for a studio releasing its first original game) and never more so than in the giant, twisted figures of those trying to stop you proceeding. It must be said that, where Playdead’s blank stories encourage debate about metaphor and meaning, Little Nightmares’ wordless style is a little harder to swallow when the story seems more straightforward. Getting to know why Six is… the way she is (I’ll say no more on that) feels as though it would have added to the experience, rather than ruining any mystique.

A nightmarish custodian who literally sniffs you out as his hideously long arms feel their way towards your hiding place; twin butchers, fattened and deformed by god knows what; the ghoulishly beautiful woman in kabuki dress that haunts Six’s dreams. Each owns a stretch of the rooms you need to pass through and, as you’re forced to watch their grim (if oddly mundane) business in hiding, each teach you a little more about just how bad a situation Six is in. All that’s left to do is creep past, outsmart them using the room around you or, most horrifying of all, realise there’s no fight, only flight, and be forced to simply run past in the hope they can’t catch you.

The Maw itself is something like the world’s worst doll’s house. 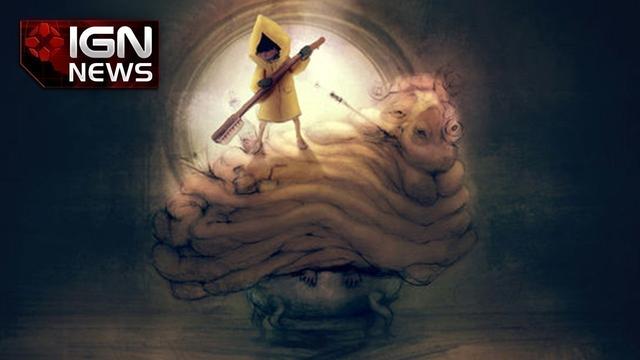 Developer Tarsier doesn’t shy away from showing them in their full, grim glory. You know where your predators are and what they can potentially do to you at almost all times – you’re more worried about them knowing where you are. I don’t recall a single jump scare in the entirety of Little Nightmares’ runtime, but I know I yelped as a butcher wheezed and stooped to check under the greasy workbench I was hiding beneath, or as something chased me through a room neck-deep with shoes (an admittedly uneasy callback to Holocaust imagery). Six is trespassing on their property – the sense that they know the lay of the land in a way you don’t is overwhelming.

The Maw itself is something like the world’s worst doll’s house, the front walls wrenched away and its themed rooms built to absurd dimensions – made to reflect a small child’s view of a giant, adult world. It’s lit like a haunted house, regularly forcing you to flick open Six’s only possession, a tiny cigarette lighter – but it’s more terrifying for not being abandoned. This place – with its nurseries full of restlessly sleeping children, curious packages transported by hook, and some truly disgusting visitors – is grotesquely functional. It allures as much as it repulses, adding up to make for one of the best gaming locations I’ve seen in years, startlingly new and painstakingly tooled to encourage cautious exploration (including some very satisfyingly hidden secrets).

Its dioramas are beautifully drawn and wonderfully tactile, allowing you to build makeshift staircases out of gargantuan filing cabinet drawers or climb up craning, curling furniture to out-of-sight shelves. Smaller objects can be picked up and thrown, most often to no benefit other than being a nice way to take your mind off things as you enjoy some appropriately childish property damage. On a side note, I don’t think I’ve ever enjoyed the soft flumpf of jumping on a digital bed like I have in Little Nightmares.

It’s a shame, then, that Little Nightmares’ primary problems are so boring. Its ‘2.5D’ set-up (Six can creep some way up the Z-axis in every environment) makes certain moments of precision platforming simply irritating, specifically when you jump slightly at the wrong angle and tumble unnecessarily into an abyss. Likewise, a few of its instant-death obstacles are the kind of trial-and-error puzzling that should have been left behind last decade. Couple that with inconsistent checkpointing and long load times (a trade-off presumably made to allow entire chapters of the game to be played seamlessly), and death can become more frustrating than frightening.

The camera moves like some floating, flitting eye, watching events unfold but unable to do a thing about it.

“Those are occasional issues, though, more than made up for in the constant pleasure of exploration, which is enhanced by some subtle tricks. Environments are often built just bigger than the camera’s field of view can handle, almost daring you to look into their dark corners (occasionally revealing the horrors to come a little earlier than you might expect). The camera itself moves with an ever-so-slight delay and sways with The Maw’s ocean rocking, giving the impression of not being a perfect lens but some floating, flitting eye watching events unfold but not being able to do a thing about it.

There’s much more to enjoy, from the lovely way Six cradles her lighter while she runs to stop it going out, to “boss battle” sections that require you to outthink your potential captors across multiple rooms, constantly re-evaluating where they could emerge from – to the point where you simply cower in a dark place, just in case their will breaks before yours. It’s the quintessentially well-designed game; animation, sound, presentation, and puzzles each affecting the other in a constant, gorgeous cycle.