WASHINGTON — Playing video games, including violent shooter games, may boost children’s learning, health and social skills, according to a review of research on the positive effects of video game play to be published by the American Psychological Association.

The study comes out as debate continues among psychologists and other health professionals regarding the effects of violent media on youth. An APA task force is conducting a comprehensive review of research on violence in video games and interactive media and will release its findings in 2014.

“Important research has already been conducted for decades on the negative effects of gaming, including addiction, depression and aggression, and we are certainly not suggesting that this should be ignored,” said lead author Isabela Granic, PhD, of Radboud University Nijmegen in The Netherlands. “However, to understand the impact of video games on children’s and adolescents’ development, a more balanced perspective is needed.”

The article will be published in APA’s flagship journal, American Psychologist.

While one widely held view maintains playing video games is intellectually lazy, such play actually may strengthen a range of cognitive skills such as spatial navigation, reasoning, memory and perception, according to several studies reviewed in the article. This is particularly true for shooter video games that are often violent, the authors said. A 2013 meta-analysis found that playing shooter video games improved a player’s capacity to think about objects in three dimensions, just as well as academic courses to enhance these same skills, according to the study. “This has critical implications for education and career development, as previous research has established the power of spatial skills for achievement in science, technology, engineering and mathematics,” Granic said. This enhanced thinking was not found with playing other types of video games, such as puzzles or role-playing games.

Playing video games may also help children develop problem-solving skills, the authors said. The more adolescents reported playing strategic video games, such as role-playing games, the more they improved in problem solving and school grades the following year, according to a long-term study published in 2013. Children’s creativity was also enhanced by playing any kind of video game, including violent games, but not when the children used other forms of technology, such as a computer or cell phone, other research revealed. 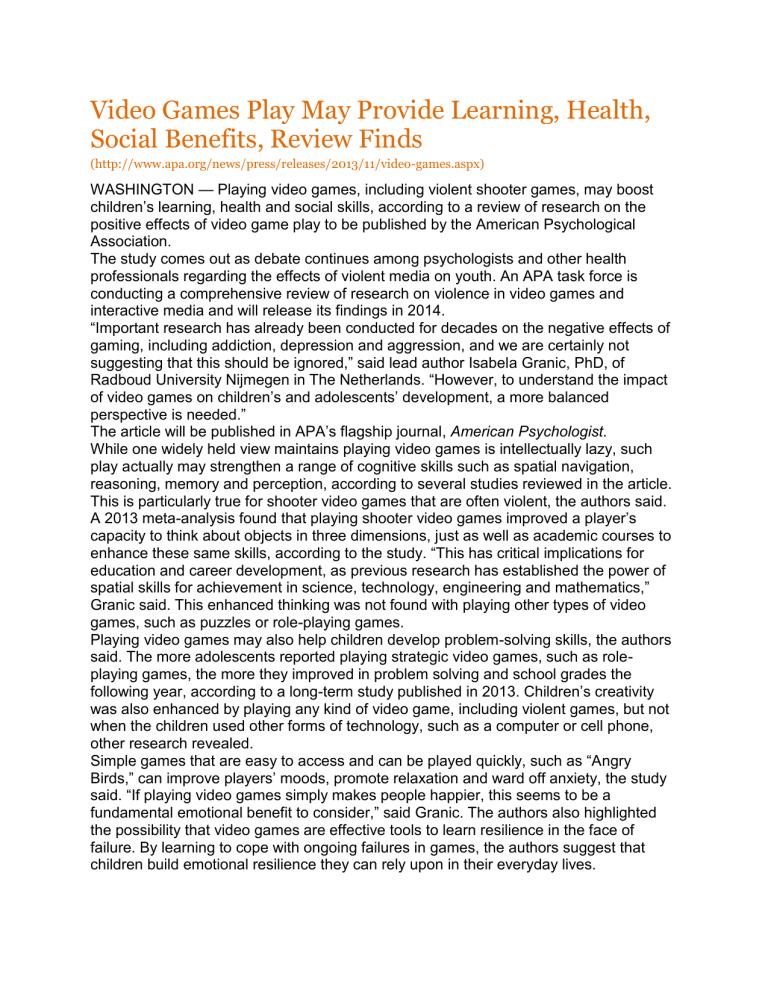 Simple games that are easy to access and can be played quickly, such as “Angry Birds,” can improve players’ moods, promote relaxation and ward off anxiety, the study said. “If playing video games simply makes people happier, this seems to be a fundamental emotional benefit to consider,” said Granic. The authors also highlighted the possibility that video games are effective tools to learn resilience in the face of failure. By learning to cope with ongoing failures in games, the authors suggest that children build emotional resilience they can rely upon in their everyday lives.

Another stereotype the research challenges is the socially isolated gamer. More than 70 percent of gamers play with a friend and millions of people worldwide participate in massive virtual worlds through video games such as “Farmville” and “World of Warcraft,” the article noted. Multiplayer games become virtual social communities, where decisions need to be made quickly about whom to trust or reject and how to lead a group, the authors said. People who play video games, even if they are violent, that encourage cooperation are more likely to be helpful to others while gaming than those who play the same games competitively, a 2011 study found.

The article emphasized that educators are currently redesigning classroom experiences, integrating video games that can shift the way the next generation of teachers and students approach learning. Likewise, physicians have begun to use video games to motivate patients to improve their health, the authors said. In the video game “Re-Mission,” child cancer patients can control a tiny robot that shoots cancer cells, overcomes bacterial infections and manages nausea and other barriers to adhering to treatments. A 2008 international study in 34 medical centers found significantly greater adherence to treatment and cancer-related knowledge among children who played “Re-Mission” compared to children who played a different computer game.

“It is this same kind of transformation, based on the foundational principle of play, that we suggest has the potential to transform the field of mental health,” Granic said. “This is especially true because engaging children and youth is one of the most challenging tasks clinicians face.”

The authors recommended that teams of psychologists, clinicians and game designers work together to develop approaches to mental health care that integrate video game playing with traditional therapy.

The American Psychological Association, in Washington, D.C., is the largest scientific and professional organization representing psychology in the United States. APA's membership includes more than 134,000 researchers, educators, clinicians, consultants and students. Through its divisions in 54 subfields of psychology and affiliations with 60 state, territorial and Canadian provincial associations, APA works to advance the creation, communication and application of psychological knowledge to benefit society and improve people's lives.