It’s a shame Lost in Random is good, because if it was bad I could call it a crapshoot. That’s not only an insight into my writing process, which prioritises puns over everything else, but also the joyful silliness to Lost in Random. The adventure game embraces the childlike simplicity of anticipation and excitement that comes from the roll of a dice, and it feels like a crime that I can’t think of a suitable dice joke for it. Lost in Random rolls double sixes? What the hell is that? That’s the kind of joke that will get me run out of town on the boxcars.

My brilliant dice based writing aside, Lost in Random offers a spellbinding time. Had it launched a decade ago, I’m sure it would be remembered now as a cult classic. Having only played through the opening sections of the game in my preview, I’m still unsure how much it will stick the landing. If it maintains the sense of wonder it captures in the early hours, then it will definitely establish itself as a throwback hit, and one of the big surprises of the year. If it starts to become repetitive though, it could get very stale very quickly. That it would have been a classic a decade ago could be its undoing - gaming may have moved on.

Lost in Random feels like a mix between Alice: Madness Returns and MediEvil. In my interview with Zoink CEO Klaus Lyngeled and director and lead writer Olov Redmalm, they confirmed as much, adding that Psychonauts, MDK, and, for the dice rolls, Baldur's Gate were also in the mix. While Psychonauts 2 has just launched, we don’t tend to see many games like Lost in Random these days. In my preview chat with the team, and in the one-on-one interview following it, the fact Lost in Random is an adventure game is stressed over and over again. There’s no jumping at all - a deliberate mechanic to underline that the game is not a platformer - and the combat has far too many interesting quirks for it to be a hack-and-slash. With fairly contained and linear settings, it’s not an open-world epic either. It’s the type of game that defined the PS2 era, and spilled over into the early days of the PS3 and Xbox 360, before shooters became more dominant.

This is all to the game’s credit. Clearly, to make a game that goes against the grain of current trends is a risk, but there is no trace of Lost in Random being focus-grouped into existence. Every decision has been made deliberately, to wring as much whimsy out of the world as possible.

I’ve been using words like that a lot. ‘Whimsy’, ‘joyful silliness’, ‘spellbinding’. I probably sound enamoured by Lost in Random, but the truth is I’m much more interested in its potential. Right now, it’s Big Red, which is super cool dice slang for ‘seven’. It’s okay. It’s good, even. But this is a game that will live and die by its level design and how it builds on its central dice rolling mechanic. As for the levels, I haven’t seen enough of them to judge, and while the Tim Burton-esque visuals are interesting, Lost in Random is not the first piece of media to try to look Burton-esque. 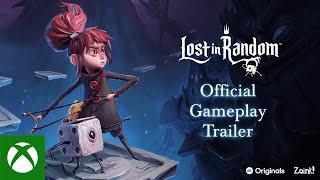 The dice rolling too has a lot of room to grow. The game sees you play as Even, who must rescue her older sister, Odd. To do this, she has to venture through six locations - each named after one face of the die - with her new friend Dicey by her side. Dicey is voiced by Redmalm himself, and throughout the game, you will collect different spots to level the die up. The more spots, the more faces you can roll. These rolls, activated mid-battle, will slow time down and bring up a deck of cards, each with different powers. In the preview, this included a stronger bow, an energy sword, and some healing. As the game progresses, you unlock more cards and deck-building mechanics are introduced, though the preview didn’t last long enough for this to be tested.

While it sounds complicated with both a dice and a deck of cards to contend with, it’s best to think of it in video game terms. You get to use a power in combat, but that power is randomised. You can try to give yourself a chance by playing with the odds, but you still won’t get to choose it completely. When you activate this power, your random selection comes up, and like in Mass Effect, time stops briefly. You choose the power and the battle resumes, with a cooldown - sped up by killing enemies - now in effect.

Even with just a bow and sword, choices have weight to them. A bow let me pick off big foes safely, but was a slower experience, while the sword swept up the swarming beasties, but left me vulnerable to a powerful attack from their larger, tougher compadres. Once more choices need to be made, both in terms of deck-building and in the heat of battle, the sense of randomness at the heart of Lost in Random should start to come alive.

Lost in Random is the sort of game that I desperately want to succeed - we need more games like this in our current landscape over bloated 100-hour slogs, soulless shooters, or always online battle pass affairs. But these games can be tricky to evaluate, especially in a preview where I can chalk any missteps off as a feature bound to be fixed in the full version. Combat without Dicey, for example, is stale and dull. That may be to push you to use Dicey, or perhaps you'll level up, but it certainly doesn't have MediEvil's base charm when the die is recharging. Narratively, the story feels thin too, and will need to be fleshed out by mini adventures within each world. Let's go back to the crapshoot. It feels like I'm betting on a hard eight, and one die has landed on a four. The other's still up in the air.

Next: We Asked Our Readers To Rank The Eeveelutions, And You All Got It Wrong

Nintendo's wireless Mega Drive controllers for the Switch will have three extra buttons in Japan.

About The AuthorStacey Henley(766 Articles Published)

Stacey Henley is the Editor-in-Chief at TheGamer, and can often be found journeying to the edge of the Earth, but only in video games. Find her on Twitter @FiveTacey