There are few bigger differences in poker than MTTs vs. cash games. Though they are both poker when it comes down to it, they require completely different skill sets. This is why there are so many tournament players who just can’t post a winning cash game session no matter what they do.

In fact, the luck element is evidenced by the World Series of Poker Main Event winners over the past 10 or so years. There are a number of huge tournament winners who will never again make a big cash in a major tournament, but it just doesn’t work this way in cash games. You won’t see a random cash game player go out and win consistently for two months if they had previously been a long term loser. The primary difference between these two forms of poker can be summarized in just one word: luck. With that said, it is not nearly that simple.

Deciding which type of game you are best cut out for can very well decide whether you end up profitingat poker in the long run. If you like to gamble and can handle extreme swings and variance, tournaments are right up your alley. On the other hand, if you prefer small and steady wins to the occasional big score, cash games are the better choice.

There are a lot of players who are able to win at both forms of the game, so you might even be able to succeed no matter what you play. There is more money to be made in cash games if you are looking at the big picture, but if you are looking for a lucky boost to your bankroll you are going to be after a tournament.

The skill sets, much like your preferences when it comes to variance, are also incredibly important. A player who is able to 3-bet light, make strong c-bets, and can float will do much better in cash games than MTTs. This is just the tip of the iceberg, though, and the drastic differences between MTTs and cash games are virtually never ending. 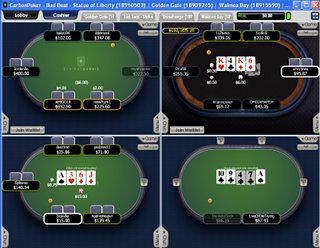 MTT players are said to have the toughest life of all professional players. There are few things more frustrating than playing perfect or near perfect poker and losing. This is exactly what happens to tournament players on a daily basis. It doesn’t matter how well you play if you are unable to win a number of crucial coin flips.

Of course, skill is going to give you a significant edge over the field, but it will seldom be enough togenerate a win. Even the best tournament players in the world regularly bust in the early stages of tournaments to complete amateurs. At the same time, however, top MTT pros will cash a lot more than your average player. This is the unique nature of tournament poker. You will have a long term edge over your opponents, but you can’texpect to win every day.

Tournament players need to be able to effectively spot the most +EV situations, even when the line between profitable and unprofitable is very thin. Identifying situations where you need to make a certain play can be quite tedious. In addition to this, a successful MTT player has to be ready and willing to gamble. You are going to have to go all in with very mediocre hands far more often than you would like.

Getting into “all in or fold mode” is one the essentials for any winning MTT player. Tournaments are very risky and will turn almost anyone into an emotional roller coaster, but they just might pay off with a multi million dollar pay day. If MTTs sound like the game variation for you, check out this list of the best tournament poker sites.

Cash games require a lot of skill and a lot of consistency. If you are lacking either of these individual traits, you will inevitably struggle when it comes to actually posting a steady win rate. There are cash game players who seem like they win every day and then there are those players who win 5.1 out of 10 days.

Your goal, of course, should be to win as consistently as possible, but it is much easier said than done. Acquiring the skills necessary to beat cash games can be a very long and tedious process. It can and does take months if not years to beat even the small stakes online ring games. If you want to be able to reap the rewards that cash games have to offer, you need to be willing to put in a ton of work and time at the tables.

Players like Phil Ivey or Tom Dwan, on the other hand, have always had their fair share of tournament success in addition to their cash game winnings. Take the initiative to be a truly skilled player and you will find that cash games really are the foundation to a long and profitable poker career. If cash games sound like the best option for you, check out our rankings and list of the best online poker sites for cash games.